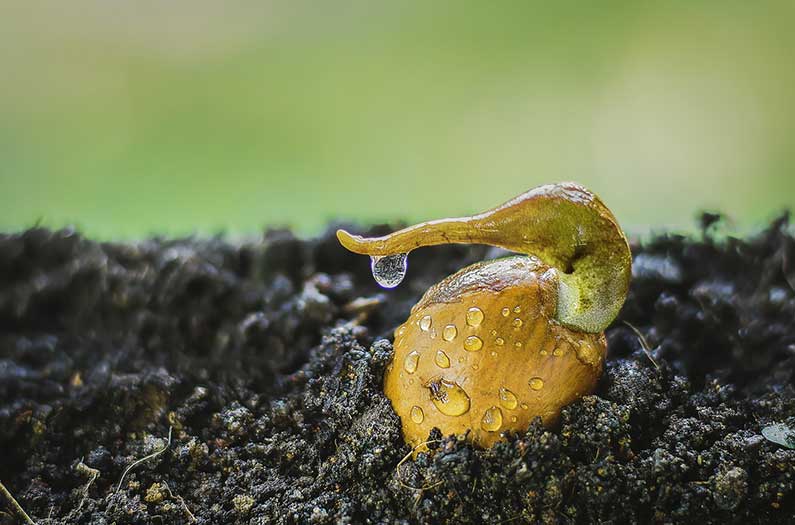 A new type of soil irrigates itself

Researchers have found a way to manufacture water out of thin air—a discovery which could one day make agriculture possible in some of the driest landscapes on earth.

Their invention revolves around super moisture-absorbent gels (SMAGs) that are made with an ingredient called hygroscopic polymer that enables the gel to soak up water vapor suspended in the ambient air, and transform it into liquid irrigation for plants. If mixed into dry, sandy soils, these gels increase water availability for long periods, and enable plants to thrive in otherwise dry conditions, experiments show.

The SMAGs are actually a product of previous work from the researchers, who come from the University of Texas at Austin. But this is the first time they’ve tested how well it works in arid soils.

They followed the reasoning that in arid environments, despite the dry conditions during the day, the cooling air at night actually increases levels of ambient humidity. And that valuable water resource, if captured by the gels, could be diverted into the soil and stored. Meanwhile, the gels are also designed to be thermally-responsive, such that rising temperatures during the daytime cause them to release their stored contents as liquid water directly into the soil, some of which might also evaporate to humidify the plant aboveground—providing an added advantage in the dry daytime air.

Based on these assumptions, the researchers’ next step was to test the gels in experimentally dried-out sandy soils, which were exposed to hot daytime temperatures. This revealed that each gram of dry soil enriched with super-absorbent gels could slurp up about four grams of water from the air, under high-humidity conditions. That was nearly two orders of magnitude higher than the absorbency of sandy soils that had been left unadulterated by the gels—and proof of principle that the new ingredient can substantially increase the water-storing capacity of soils.

Crucially, the researchers also showed that under lower humidity conditions more representative of dryland habitats, after a month of experiments, the gel-enriched soil had retained 40% of its initial water content, while the regular sandy soil was left with only 20% after just one week.

The next step was to explore how well plants would grow in these conditions. So the researchers carried out a separate radish-growing experiment, splitting seeds between plots with regular and gel-enriched soil and giving them all a dose of irrigation to start with. In the gelled soils, radishes seeds germinated in just two days and grew for two weeks before they needed to be watered again, thanks to the improved water-storing capacity of the soil. In comparison, while radish seeds planted in plain soils did germinate, every one withered and died within six days.

So, the consensus is that sandy soils infused with the SMAGs retain more water, for longer, save on the amount of irrigation applied to plants, and can provide a better substrate for healthy plants.

What could this discovery spell for the future of agriculture? Drylands now account for over 40% of the earth’s surface overall, and 45% of the land area used to grow food. So it’s fairly essential that we find ways to reduce water use and make crops more resilient to drought. Because this new tool gives soils the ability to essentially manifest water from the air—and then to hold onto it—the researchers believe it could extend the area of productive farmland to drier parts of the planet, and make farmers independent of conventional irrigation measures. That would also boost food production and security to serve a growing world population, and reduce water use in a world where drought is making it an increasingly precious resource.

The researchers hope their gels could one day “enable crop planting in those underdeveloped and drought areas without water and power supplies,” explains Guihua Yu, a mechanical engineer at the University of Texas at Austin, and lead researcher on the new study.

There’s even a possibility that by providing the conditions for plants to grow in arid sandy soils, this new method of irrigation could reinstate vegetation in desert regions, and slow the advance of desertification across the globe.

But for this invention to find a real foothold in the field, there are still several factors to explore—such as the effect of wind on evaporation in hot environments, and whether the gel affects nutrient flows in soil. Those will be just some of the questions they interrogate in their future research into this super-absorbent gel. “We are trying to develop more cost-effective SMAGs to be [available] for wider application, as well as testing SMAG-soil with nutrients incorporated for better performance and wide-ranging crops,” Yu says.

Decoupling agriculture from conventional irrigation sounds like a wild idea—but this invention may be a promising first step.