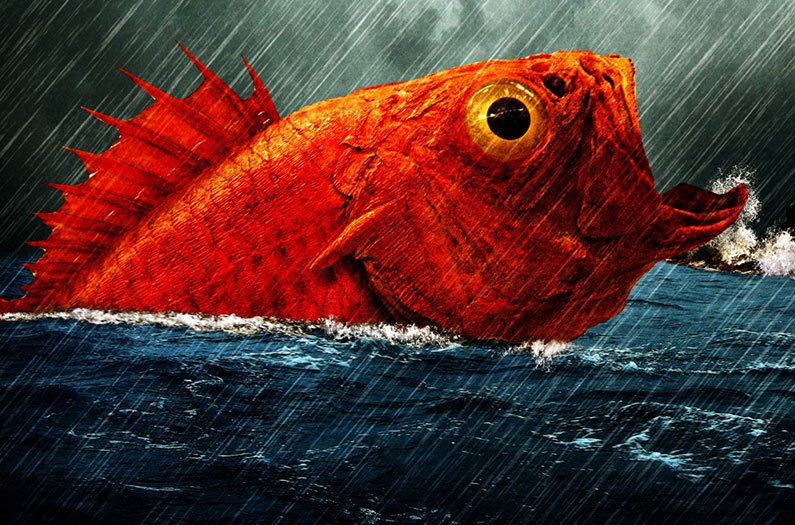 Big fish sinking to the bottom of the sea could sequester millions of tons of carbon
By Emma Bryce
November 27, 2020

Researchers have chanced upon an unconventional way to help mitigate climate change: leaving more big fish in the sea. By their estimates, this could lock millions of metrics tons of carbon into the deep ocean.

Unlike most land animals which release the carbon accrued in their bodies into the atmosphere when they die, the bodies of vast numbers of marine animals drift down and are ultimately sealed within the chambers of the deep ocean. Collectively, these become a rich store of carbon which, lying undisturbed, can be locked up for thousands of years.

This massive ocean reserve is known as ‘blue carbon’, and the natural fish death it represents is an under appreciated form of sequestration, explain the University of Montpellier-led researchers in the new study.

But industrial fishing interrupts that natural process, diverting tons of carbon from its resting place on the ocean floor, and instead releasing it into the atmosphere as fish are brought to the surface to be consumed.

Previously, we didn’t have estimates for how big this blue carbon store could be—and how much extra CO2 fishing might be releasing into the atmosphere through this process. So the researchers decided to investigate that question, by looking at some of the largest commercially-caught species worldwide, whose bigger bodies contain more carbon and are also likely to sink much faster into the deep.

By analyzing tuna, shark, billfish, and mackerel fisheries stats since 1950 up to the present day, they revealed a striking level of lost potential. The researchers assumed that each snared fish contains roughly 12.5% carbon relative to its body weight, and that 94% of that is ultimately emitted into the atmosphere during processing and consumption. Added to this, they factored in the emissions arising from fuel use of vessels that have ventured further and further out into the sea in search of fish over the last 70 years.

Collectively, this showed that roughly 730 million metric tons of carbon dioxide have been released into the atmosphere through fishing—mainly industrial fishing—since 1950. And the extracted fish contributes a significant chunk to the emissions total already generated by fuel: “Taking into account emissions coming from fish biomass increases the carbon footprint of fisheries by 25%,” explains Gaël Mariani, a PhD student from the University of Montpellier, France, and lead author on the study. This quantity is carbon that could have been sequestered in the ocean, if those fish had been left uncaught.

But exactly how much carbon is that? In 2014 alone, the study calculated that fisheries released 20.4 million tons of carbon dioxide—arising from the bodies of caught fish and expended fuel—the equivalent of the annual emissions of 4.5 million cars. It also equates to almost 20% of the decline in emissions that occurred across the whole of Europe between January and April this year, due to the coronavirus pandemic.

These figures hint at what could be achieved if we left more large fish in the sea to take their natural course. Of course, fish are also an essential part of global diets, and they will grow increasingly important as we try to replace red meat with other protein sources. But what’s nevertheless important to consider is how much of this caught fish we really need to consume at global scales, and how much of it ultimately goes to waste – when it could otherwise have served the planet better as captured carbon in the sea.

What’s more, the researchers found that almost half of the blue carbon that’s extracted from the ocean (44%) arises from fisheries that wouldn’t survive without government subsidies. Many of these fisheries are actually deemed ‘unprofitable’ because they occur in remote high seas locations in the Central Pacific and South Atlantic, which require a lot of fuel for vessels to reach. That also compounds the problem because it means boats are guzzling more fuel, and emitting more carbon to get to these far-off places to fish.

The reason this matters is that not only are such fisheries occurring at a high financial cost, but also at a huge environmental one—the extraction of blue carbon and release of emissions from fuel—which, until now, has mostly gone unrecognized.

With its revelations, however, the study draws a question over whether the nutritional benefit of those remotely-caught fish is really worth the immense cost.

Limiting the extent of these inefficient and unprofitable fisheries could be a first step to leaving more carbon-trapping large fish behind in the sea, the study suggests. The United States, Spain, China, Japan, Indonesia, and Taiwan were among the nations found to have extracted the biggest share of blue carbon since 1950, so these could be a target for future measures to try and reduce that impact.

But still, why take this unconventional route to carbon sequestration; how much can it really achieve? As the researchers point out, reaching the goals of the Paris Climate Agreement will take all the effort we can muster, and building up reserves of blue carbon is one solution that can bring us at least incrementally closer to that goal. To this end, “our study can serve as a new argument for the introduction of more sustainable fishing practices,” Mariani says.

Because the researchers’ estimates are conservative and only included species of large-bodied fish, they also think they’ve likely underestimated the carbon-trapping potential of marine species. Future analyses might even reveal that carbon sequestration through fish is larger than estimated, which could align it more closely with the benefits of better known mitigation measures, like coastal wetland restoration.

Now, the researchers are investigating how sustainable fishing measures can be applied to balance the need food security, with the benefits of carbon sequestration, by leaving optimal numbers of fish in the sea. “One of our goals now is to estimate how sustainable fishing practices would increase the natural capacity of fish to sequester carbon,” Mariani says.

Overall, the study prompts a closer look at the hidden environmental costs of global fisheries, and suggests we find solutions to increase its efficiency. Because the more big fish we leave in the sea, the more fodder we give nature to do its remarkable work.