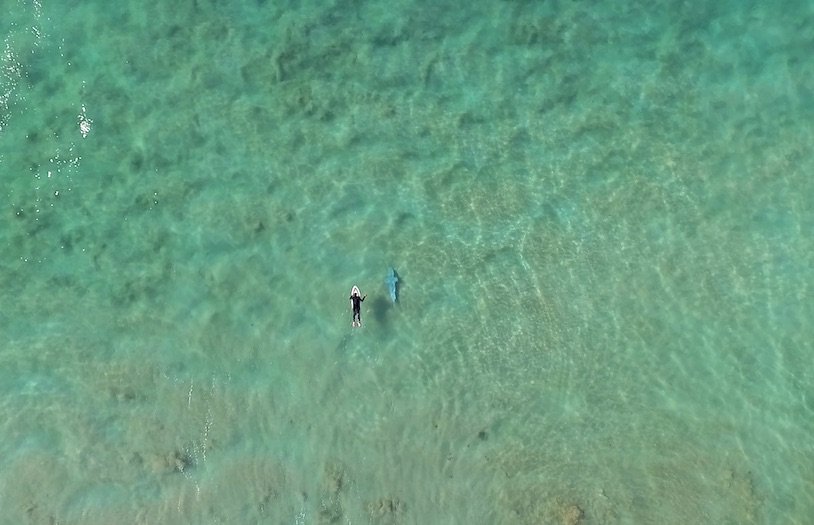 Can blimps help save sharks?

A fin slices in and out of the water. It belongs to a shark—uncomfortably close to shore and about to take a bite out of someone’s surfboard, or worse. It’s a scene from a Spielbergian nightmare.

But look, up in the sky… it’s a bird! It’s a plane! It’s a blimp, here to sight the shark, alert the lifeguards, and save the day.

Such is the vision behind Project AIRSHIP—aka “Aerial Inflatable Remote Shark Human Interaction Prevention”—a blimp-based shark surveillance program designed to make people safer in the water, and reduce the call for over-the-top mitigation efforts that end up harming sharks and other sea life. (The image above shows a fake shark, used for testing the blimp.)

Shark attacks rear much larger in the public imagination than they do in the actual seas. Worldwide, there are about four fatal shark attacks per year. Other hazards, like rip currents and drunk swimming, pose more of a threat: “In Australia, unfortunately, over 100 people a year drown in our oceans,” on average, says Kye Adams, a marine biologist at the University of Wollongong in New South Wales. “Whereas less than one person gets bitten by a shark.”

Still, people want peace of mind at the beach. So many Queensland beaches install shark nets—long barriers designed to ensnare anything that gets too close to shore. While these do catch sharks, they also trap, and sometimes kill, dugongs, turtles, rays, and whales. If attacks or close calls do occur, they can be followed by shark culls.

“We want a solution that’s not going to harm the marine environment, but provide a level of safety to the public, and reduce the chance of shark encounters,” says Adams. “So my approach is to use a blimp.” 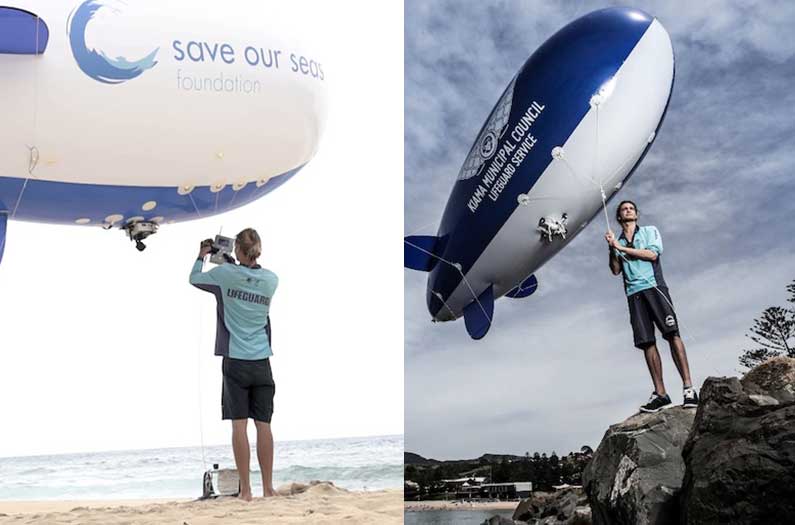 The shark-spotting blimp is about the size of a car. It floats above the shoreline on a 75-yard tether, carrying a camera pointed down at the ocean.

In its current incarnation, footage from the camera is streamed to a screen inside the lifeguard hut, where someone is tasked with watching for sharks. Eventually, the goal is to develop software that can automatically detect signs of sharks or other hazards, and alert lifeguards as needed.

For a recent paper in Scientific Reports, Adams and his colleagues tested out the tool’s efficacy at Surf Beach, a popular surfing and swimming spot in Kiama, New South Wales. They sent a “shark analogue”—a free diver of about the right size—to swim near the beach in various sea and weather conditions, and filmed it with the blimp. They then asked lifeguards to view randomized clips of the footage with and without the shark analogue.

Read more:  A 15-year snapshot of US diets reveals a gradual shift away from beef

Lifeguards were able to detect the “shark” over 90% of the time in shallow water on sunny, calm days—the conditions in which people are most likely to be out swimming. These numbers dropped if it was windy or cloudy, or if the “shark” was in deep water. (When all three were true, they got quite low, to about 3%.)

Why a blimp? Unlike a drone, a blimp can hover for eight hours without needing to be recharged. It can also display advertisements, which could cut down on costs for any beaches that want to implement it. (The trial blimp is sponsored by the shark lovers over at the Save Our Seas foundation.)

As it turns out, overhead filming is “quite useful for detecting things like rips,” says Adams. So lifeguards can watch the stream for more prevalent dangers, too. And to balance any human surveillance-related concerns, the footage is not at the level where individual people can be identified, he says. The aim is for beachgoers “to feel safe under the blimp.”

Survey results, also reported in the paper, suggest they might—84% of respondents said the blimp made them feel at least a little safer, and 90% said they’d like to see similar blimps at other beaches.

This, to Adams, is particularly important. “The risk of encountering sharks and interacting with a shark is already super low,” he says.

Surveillance, by showing hour after hour of Jaws-free water, “can reassure people,” he says. “Every time you enter the ocean, don’t have to be forefront in your mind.” And if you do start to worry, you can just glance up at that trusty, ever-watching blimp.