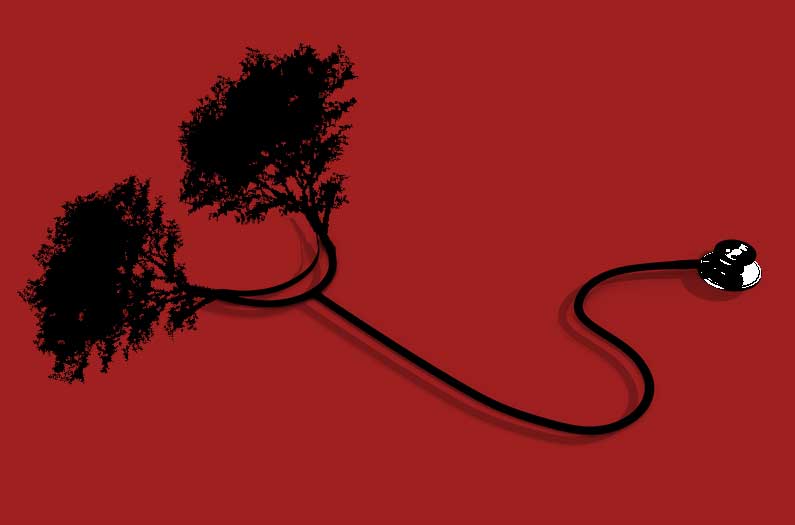 A new analysis reveals how a rural clinic helped save more than 27 square kilometers of tropical Indonesian forest—equating to more than $65 million worth of avoided carbon emissions
By Sarah DeWeerdt
November 3, 2020

Tropical forest conservation has often come at the expense of Indigenous people and local communities. In turn, when people lose their traditional livelihoods and ways of life, they may resort to illegal logging and other unsustainable activities to survive—thus putting at risk those conservation efforts.

For example, community surveys conducted between 2005 and 2007 near Gurung Palung National Park in Indonesia suggested that a lack of access to medical care was driving illegal logging in the park: people couldn’t afford to visit the doctor, so their health problems got worse, eventually necessitating more expensive medical care, which families often paid for with proceeds from illegal logging in the park.

But it is possible to interrupt such vicious cycles, a new study shows. The study tracks the impact of an affordable clinic that opened near the park in 2007, and reveals that improving access to health care can reduce carbon emissions associated with tropical forest loss—meaning that good health for humans is good health for the climate, too.

Most of the communities near the park—21 of 23 districts, home to 73 villages—signed conservation agreements that entitled residents to clinic discounts if illegal logging activity was reduced. Educational programs, skills training, and other conservation activities (such as a chainsaw buyback program) also took place in participating communities. These various aspects of the program were all developed with the input of community members.

Not surprisingly, those who lived closer to the clinic were more likely to use the clinic and to do so more frequently. Even so, just over 40% of all individual patients came from non-participating communities, some traveling from quite far away—a finding that highlights the extreme lack of health care access in the region. This is probably because the clinic accepted barter payments such as tree seedlings, manure, handicrafts, or labor in exchange for medical care, making it affordable for those patients, the researchers say.

Health outcomes in both participating and non-participating communities improved over time, with declines in malaria, tuberculosis, childhood infectious diseases, and diabetes. Upper and lower respiratory infections increased, possibly because of fires in the area in 2015, or possibly because people began to visit the clinic for less severe conditions.

But how about the conservation impact? Researchers looked at remote sensing data to track how forest loss changed over time. The park near the clinic had a 70% reduced rate of deforestation compared to other similar national parks in Indonesia, they reported in the Proceedings of the National Academy of Sciences. This amounted to 6,770 acres (27.4 square kilometers) of rainforest loss averted during the clinic’s first decade of operation.

The researchers estimate that the amount of above-ground carbon contained in the trees saved over 10 years would be worth US$65.3 million in the European carbon market. “The carbon value of the intervention impact demonstrates a theoretical monetary return that would more than offset intervention costs if a carbon market were accessible to interventions aiming to couple rural health programs with forest conservation in a similar way,” the researchers write.

The nonprofits involved in the project, Alam Sehat Lestari and Health In Harmony, are now working on similar programs that couple rural health care access and tropical forest protection elsewhere in Indonesia, Madagascar, and Brazil.