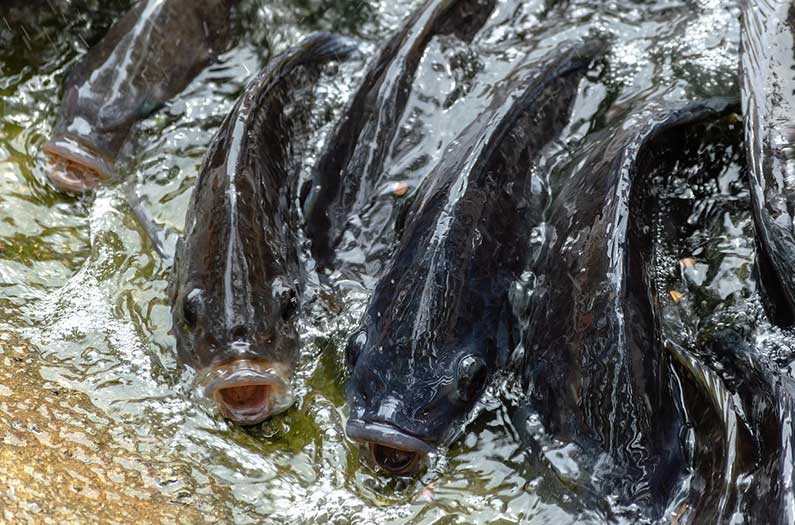 Aquaculture is now the fastest-growing food industry in the world. But with it comes the massive cost of feeding several billion voraciously hungry farmed fish. Usually, that nutrition takes the form of wild-caught forage fish like anchovies and sardines, tons of which are hauled from the ocean, and then heavily processed to make protein-rich fishmeal and oil to feed farmed species, which ultimately feed us.

It is, to put it lightly, an inefficient process—taking up 75% of aquaculture production costs—and it also implicates this industry in massive overfishing.

But now, a group of researchers think they might have the remedy in the form of a new, completely fish-free aquaculture feed, developed from marine algae. If used to replace fish-based feed for some of the world’s most popular aquaculture specieslike salmon and trout—the new formula could dramatically curb the environmental cost of farmed fish.

“The potential environmental impacts are enormous, as we fully eliminated wild-caught forage fish from aquaculture feed,” says Pallab Sarker, lead author on the new study, and an associate research professor in environmental studies at the University of California, Santa Cruz.

He and his colleagues developed the alternative feedstock using two sources of marine algae. The first is a protein-rich variety called Nannochloropsis oculata, that’s used to make a nutritional supplement for humans: the algae the researchers sourced was actually the waste material from this supplement making process, which they then repurposed as replacement fishmeal. The second ingredient is algae rich in omega-3 fatty acids, called Schizochytrium sp., which was used to substitute fish oil in the feed mixture.

When the researchers tested this new formula over a period of six months on 480 farmed Nile tilapia—one of the most widely farmed fish—it quickly became apparent that it measured up to conventional fish-based feed. In fact, the algal feed turned out to be far superior for the fish.

The tilapia that were nourished with this new green diet showed a striking 58% gain in weight, compared to the tilapia that received conventional fish feed. This might be because fish are able to more efficiently digest the proteins present in algae. Analyses of fish flesh also showed that compared to their regular counterparts, the algae-fed tilapia contained higher levels of healthy omega-3s, which, to humans, represents one of the most important nutritional benefits of consuming fish.

But it isn’t just in nutrition and growth where the algal feed succeeds: per kilogram of weight gain in the tilapia, the new formula was also found to be more cost-effective than conventional fish-based feed, Sarker says. And, because part of the algae formula derives from waste material generated by the growing nutritional supplement market, the researchers foresee that it will become both more available, and cheaper, over time.

This discovery comes at an important time for the industry. As it ramps up, aquaculture faces rising pressure to dial back its marine impacts. The chief environmental worry is that under such huge pressure to nourish the world’s growing population of farmed fish, populations of wild forage species are being depleted more rapidly than they can replenish. Because these small fish are the base of the food chain for many species, that has ecological consequences. It also increases the risk of food insecurity in some coastal regions, where forage fish are an important source of protein for local populations. What’s more, an industry that relies on a dwindling ocean resource is hardly sustainable.

While it’s possible to replace fishmeal with plant-based feeds like soy and corn, this simply repeats the problems that aquaculture feed already has: using up resources at great environmental cost to feed farmed fish, instead of ourselves, isn’t particularly efficient, or sustainable. What’s more, ingredients like soy and corn lack the beneficial omega-richness of their algal counterparts.

That said, the new feed isn’t the only nutrient rich, efficient alternative that’s currently being explored. Seaweed-based formulas, protein-rich insects like black soldier flies, and even yeast, are all currently on the table as potential marketable substitutes for fishmeal and oil. So it’s becoming a competitive field. But the research suggests marine algae could soon add to this suite of interventions, which aquaculture sorely needs.

Buoyed by their success trialling the feed, Sarker says he and his colleagues now plan to try it out on other popular commercial species like farmed salmon and trout, which currently use up most of the global share of fish meal and oil for aquaculture.

By switching these influential commercial species over to the new diet, we could leave a huge amount of fish in the ocean—and that would be a win for the environment, and for us. “Reduced pressure on this stressed marine resource will strengthen global marine fisheries,” Sarker says.