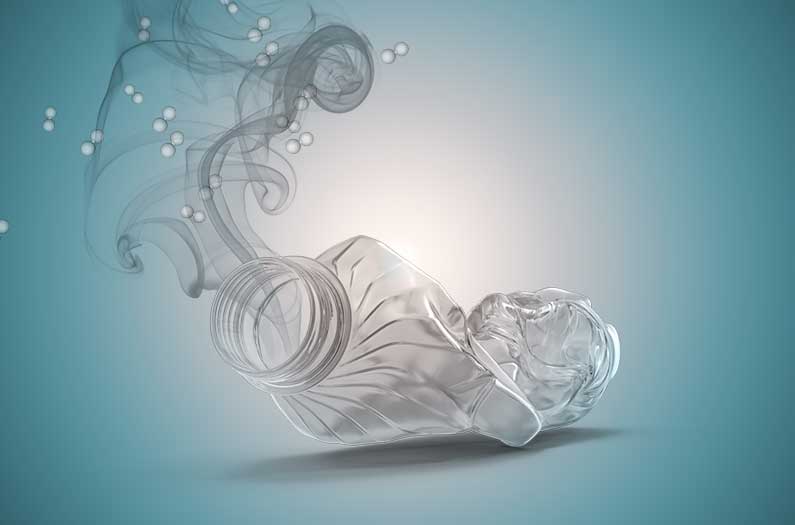 Zapping catalysts with microwaves help them extract hydrogen from plastic waste and from water
By Prachi Patel
November 12, 2020

Sometimes a simple tool does the trick. In two new studies, researchers have used microwaves to produce hydrogen from plastic waste and water, respectively. The advances promise simpler, cheaper and more energy-efficient routes to make hydrogen, a clean-burning fuel for cars and trucks.

Hydrogen is a key part of plans to tackle climate change. Hydrogen-powered vehicles use battery-like fuel cells to turn hydrogen gas into electricity, emitting only water vapor. Experts have touted the hydrogen economy for decades, but the idea is only now taking off because the technology is ready and is getting support from policymakers in efforts to meet climate goals.

However, hydrogen today mostly comes from splitting natural gas using an energy-intensive process that emits carbon dioxide. So researchers have been seeking cleaner, easier ways to produce the fuel.

In a paper published in Nature Catalysis, a team of scientists outlined a way to convert plastic bags, bottles and packaging into hydrogen using microwaves and a special catalyst they have developed.

Methods to produce hydrogen from plastic already exist. But they use very high temperatures to first convert plastic into a mixture of hydrogen and carbon monoxide.

In the new process, the researchers pulverize plastic in a kitchen blender, mix it with a catalyst made of iron oxide and aluminum oxide, and then zap it with microwaves at 1000 Watts. The microwaves trigger the catalyst particles to strip over 97 percent of the hydrogen from plastic in seconds.

The process uses less energy because it only heats the catalyst, not all of the plastic. And most of the black mass left behind is carbon nanotubes, a valuable material for electronics and other uses.

Another clean way to produce hydrogen is to split water molecules into hydrogen and oxygen using renewable electricity. This is done in a device called an electrolyzer, and large-scale devices can be complex expensive.

So researchers in Spain found an efficient way to use microwaves to trigger the water-splitting reaction. The process is simpler, more practical and significantly cheaper than using an electrolyzer, they report in Nature Energy.

Their technique involves blasting a ceramic oxide with microwaves, which removes oxygen from the material and increases its electrical conductivity. The activated ceramic material then spontaneously reacts with water that is passed over it, forming hydrogen and oxygen, which reoxygenates the ceramic so it can be reused.

“This versatile technique opens the door to new, simpler, and energy-efficient routes for hydrogen production,” the researchers write.

Countries like Japan, France, and South Korea have already invested billions of dollars in the hydrogen economy. In the United States, California is taking the lead. Automakers such as Toyota are starting to make more fuel cell vehicles while fuel companies like Shell are building hydrogen fuel stations.

As the hydrogen economy grows, better ways to produce hydrogen such as these microwave-assisted ones could be important in propelling it forward. Converting plastic to hydrogen, meanwhile, could also address the world’s overwhelming waste problem.