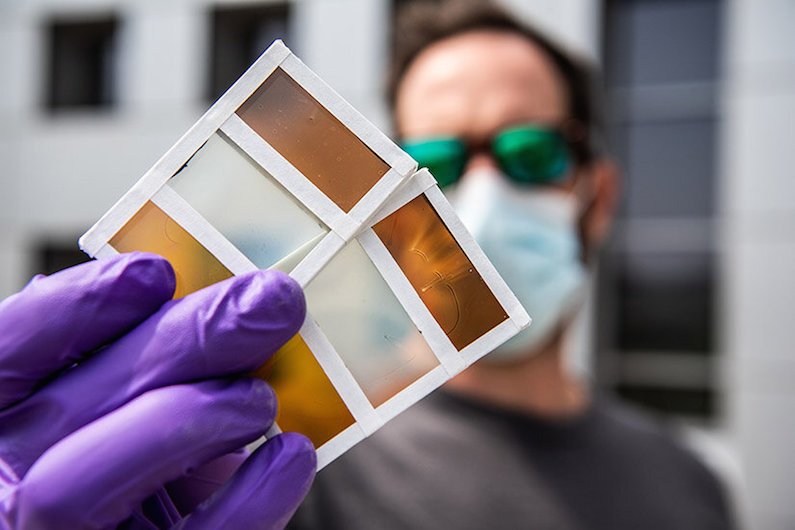 Windows just keep getting smarter. These darken in the sun and generate electricity
Dynamic windows could do double duty in sustainable building design, cooling and powering at the same time.
By Prachi Patel
November 5, 2020

Researchers have made transparent glass panes that darken in the sun’s glare and also act as solar panels. The smart windows, reported in the journal Nature Communications, could reduce a building’s air-conditioning demand while also while generating electricity.

Color-changing glass is used in transition eyeglass lenses that become tinted in sunlight. It relies on special thermochromic materials coated on glass or sandwiched between glass panels. When sunlight falls on these materials, the heat changes the arrangement of the molecules, making the glass darker and blocking glare.

For thermochromic windows, researchers are trying to find materials that block heat-producing infrared wavelengths so they can help keep buildings cool. By lowering the burden on energy-intensive air-conditioners, the straightforward technology could have a sizeable environmental impact. Air-conditioners use about 6 percent of all the electricity produced in the United States, emitting 100 million tons of carbon dioxide a year, and also use chemicals that harm ozone and cause atmospheric warming.

Researchers at the National Renewable Energy Laboratory made the energy-generating windows by placing a film of perovskites—a relatively new solar cell material that has taken the photovoltaic world by storm because it has high efficiency and is easy to make—between two glass panes. They injected a solvent vapor into the gap as well.

At low humidity levels, the window is see-through. But as temperatures rise, the vapor triggers a chemical reaction that causes the perovskite crystals to rearrange themselves into different shapes: first a chain, followed by a sheet, and then a cube. Every shape reflects light to a different degree, causing the glass to take on various colors, going from yellow to orange, red and brown. At the same time, the perovskites absorb sunlight and generate electricity.

This shape-shifting and subsequent tinting happens at temperatures ranging from 95 degrees to 115 degrees Fahrenheit which are easily achieved on hot sunny days, and takes only seven seconds. By contrast, a previous prototype that the team made took three minutes and much higher temperatures.

“A prototype window using the technology could be developed within a year,” lead researcher Bryan Rosales said in a press release.