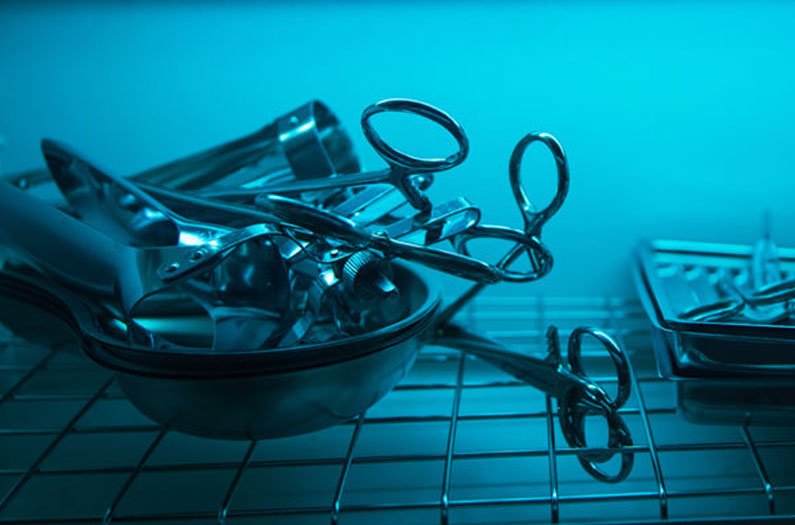 The system, designed for use in remote, underprivileged areas could also generate hot, high-pressure steam needed in other industries.
By Prachi Patel
November 26, 2020

A new portable solar-powered device efficiently harnesses the sun’s energy to generate steam at high temperatures and pressures even in hazy or cloudy conditions. Researchers who reported the device in the journal Joule say it could lead to an electricity-free method to sterilize medical tools in rural areas. It could also eliminate fuel use in other industrial applications. Many food and beverage processing systems, for instance, rely on high-temperature steam, which is typically provided by fossil fuel-powered boilers.

Sterilizing medical tools is critical to reduce infections. Autoclaves, the devices used at hospitals and clinics for sterilization, need a steady supply of pressurized steam at a temperature of about 125°C. But doctors and nurses working in developing regions and remote parts of the world don’t always have a reliable way to do this because autoclaves are expensive and power supply can be unreliable. Often, healthcare professionals turn to more rudimentary methods like burning fuels to boil water for sterilizing instruments.

A team of engineers from MIT and the Indian Institute of Technology Bombay in Mumbai made a simple solar-powered system that heats water to generate steam, which is fed to an autoclave chamber.

The solar heater consists of a copper plate with a heat-absorbing black coating that soaks up sunlight and heats water flowing through pipes attached underneath. Polished aluminum mirrors on either side of the plate focus sunlight on the plate so the system can generate high-temperature steam instead of hot water.

Such devices usually suffer from heat loss. The secret to this one’s success is a lightweight aerogel made from silica. The material is transparent so it does not block sunlight, but it insulates the system and reduces heat loss by tenfold.

The researchers tested their prototype device on a rooftop in Mumbai. Even though the sky was hazy, the device produced a steady supply of steam of over 125°C for half an hour that’s needed for effective sterilization.

While commercial electric autoclaves cost up to US $3000, the parts for this new solar-powered system cost less than US $40, the researchers say. The only limitation of the device is the aerogel, which is so far only produced in laboratories in small amounts using expensive techniques. Manufacturing the aerogel in large quantities will be important to make the device practical, and the MIT researchers hope to do that through a new startup founded by Elise Strobach, one of the paper’s co-authors.

Once the aerogel material is commercialized, a system that can produce pressurized steam for a typical small clinic-sized autoclave would be likely to cost around US$160, said graduate student and first author Lin Zhao in a press release. “If we can get the supply of aerogel, the whole thing can be built locally, with local suppliers.”