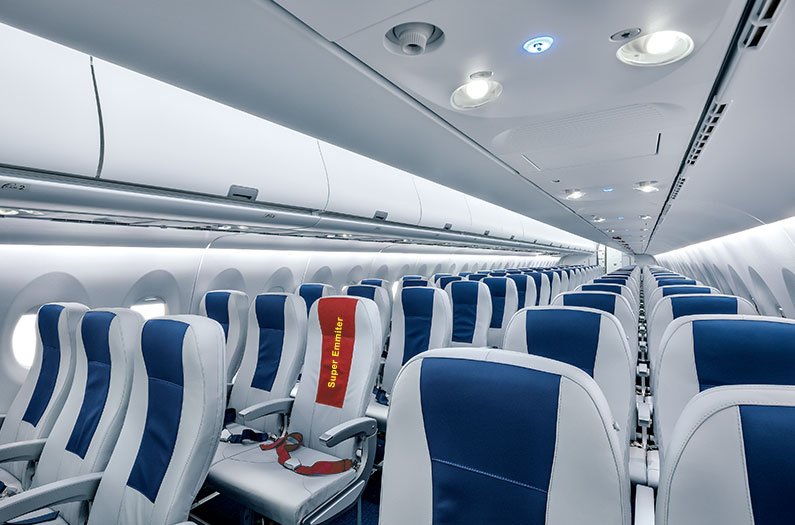 Just 1% of the world’s population is responsible for up to half of emissions from passenger aviation
By Sarah DeWeerdt
November 24, 2020

Recently there’s been a lot of talk about the climate impact of air travel, with terms like flygskam, or “flight shame,” entering the common lexicon. What doesn’t get as much attention is how responsibility for aviation emissions is distributed unequally among those who fly. In fact, an outsized proportion of emissions can be traced to just a small number of frequent fliers, a new study reveals.

Researchers assembled existing data on air travel demand from the airline industry, international organizations, and national surveys. This enabled them to paint a more detailed picture of who flies, how far, and how often, than has been possible in the past.

For example, an international airline industry group reported that there were 4.378 billion airline passengers in 2018 and that the average global citizen flies once every 22 months. But the researchers calculate that only 11% of the global population flew in 2018. The share of the global population that flies internationally is even smaller, at roughly 4% per year, they report in the journal Global Environmental Change.

Just over one-quarter of air travel worldwide takes place in North America, nearly one-quarter in Europe, and nearly one-third in the Asia-Pacific region. Regional differences are projected to become even larger in the future, even as air travel grows in all regions. By 2050, Africa could have one-quarter of the world’s population but only 2.4% of global air transport demand.

“A significant share of global emissions from air transport is emitted by a few countries,” the researchers write. Although air travel is often said to represent about 2% of global annual greenhouse gas emissions, there are 28 wealthy countries where air travel exceeds 2% of national emissions. Moreover, aviation emissions are growing faster than overall emissions in many countries.

Nor is the climate burden of air travel distributed equally within a country. Even in wealthy countries, only about 40% of people fly at all in a given year. And lots of people take only one or two plane trips per year, while others take many. “Surveys suggest that among commercial air travelers, the most frequent 10% of fliers may account for 30–50% of all flights taken,” the researchers write.

The upshot is that “a minor share of air travelers is responsible for a large share of warming,” the researchers conclude. “The percentile of the most frequent fliers—at most 1% of the world population – likely accounts for more than half of the total emissions from passenger air travel.”

Private aircraft are even more carbon-intensive; those who fly on private jets can generate emissions of up to 7,500 tons of carbon dioxide per year (in contrast, the global average per capita carbon footprint – from all activities—was just 5 tons in 2014).

The current pandemic-induced slowdown in air travel could be a chance to rethink how we collectively prioritize and allocate resources to air travel. The good news is that if the most frequent fliers cut their air travel by half, the global carbon footprint passenger air travel could be slashed by up to one-quarter. The bad news is that because the most frequent fliers are very wealthy, and/or travel for business, they’re unlikely to be dissuaded by higher ticket prices.

For now, the fact that the aviation industry doesn’t have to pay for its carbon emissions amounts to a massive subsidy for the world’s most affluent citizens—roughly US$100 billion per year, the researchers estimate. “This highlights the need to scrutinize the sector, and in particular the super emitters,” they write—and perhaps attach some green strings to industry bailouts in the wake of the pandemic.