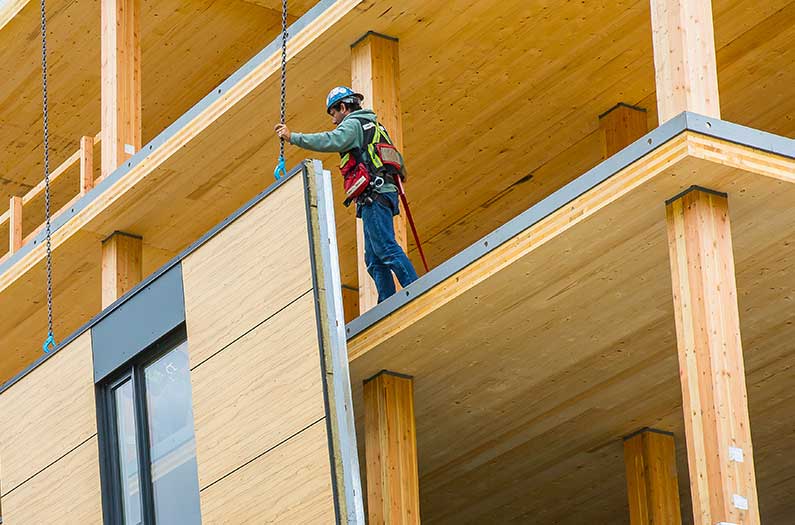 The rise of the carbon-negative building
Wooden structures that store more carbon than is emitted in their construction point to a flaw in green building schemes
By Sarah DeWeerdt
November 17, 2020
Buildings are currently the source of about one-third of global greenhouse gas emissions. Until recently, most of those emissions have come from the energy needed for heating, lighting, and so on. But that pattern is starting to change. As buildings become more energy efficient and the energy system decarbonizes, a greater proportion of a building’s lifetime emissions come from the materials used in constructing it.

The climate impact of building materials varies widely. Some, such as steel and concrete, come with hefty emissions. In contrast, wooden building materials require less energy to produce. Plus, the wood itself serves as long-term carbon storage. In fact, if wood is used thoughtfully throughout a building a structure can store more carbon than is emitted in the course of its construction, a new analysis reveals.

Researchers in Finland gathered information on 50 different examples of wooden buildings around the world from previously published studies. They calculated the carbon storage in each building based on amount of wood used in its construction. This is not the first attempt to assess the carbon storage potential of wooden buildings, but the researchers say their detailed approach yields a more accurate estimate of the real-world possibilities than past efforts.

Not all wooden buildings are created equal, the researchers found. Just because something is called a “wooden building” doesn’t mean it stores a lot of carbon. The amount of carbon stored in the buildings studied ranged from 23 to 310 kilograms of carbon dioxide per square meter.

“The potential carbon storage of wooden buildings is not mainly related to the building type, wood type, or the building size,” they write in the journal Environmental Research Letters, “but is based on the number and the volume of wooden components in these buildings.”

For example, wooden components can include structural parts such as columns, beams, and floors; non-structural parts such as ceilings and cladding; and elements installed after construction such as cabinets. When it comes to carbon storage, the more the merrier. (Of course, all this assumes that the wood comes from sustainably managed forests, they caution.)

But such possibilities aren’t captured very well in existing green building certification programs such as LEED, which focus on reducing emissions associated with the building rather than actually capturing carbon in the building materials. Such schemes may be due for an update, the researchers argue.

For example, if only about 5% of residential buildings constructed in Europe between 2020 and 2040 are built of wood (about the same share as in 2015) and those wooden buildings store only about 100 kilograms of carbon dioxide per square meter, the cumulative amount of carbon stored by 2040 would be 0.022 gigatons.

But if 80% of residential buildings were made of wood and stored 300 kilograms of carbon dioxide per square meter, the cumulative carbon storage over that period would swell to 1.067 gigatons.

That big number sounds nice, but how to get from here to there? The researchers laid out a blueprint for gradually increasing wooden construction in Europe. The percentage of wooden buildings could increase from 10% in 2020 to 80% in 2040, and the amount of carbon stored could increase from 100 kilograms of carbon dioxide per square meter in 2020 to 300 in 2040. In this scenario, the annual amount of carbon dioxide captured in buildings would be 2 megatons in 2020, 15 megatons in 2030, and 55 megatons in 2040, for a total of 0.42 gigatons stored over the 20-year period, they calculated.