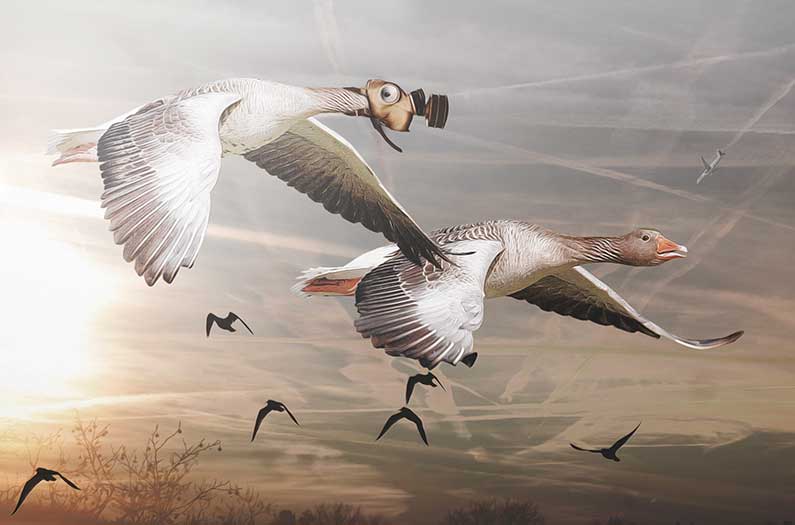 According to a new estimate, reducing ozone pollution has saved 1.5 billion birds over the past 40 years.
By Cara Giaimo
December 2, 2020

Breathing in ozone is bad for people. It inflames the airways, makes the lungs more vulnerable, and exacerbates asthma, bronchitis, and other respiratory conditions—especially on hot, sunny days when it pumps out of power plants and industrial smokestacks and gathers near the ground. In 2003, a dozen Northeastern states and D.C. banded together to adopt the “NOx Budget Trading Program,” or NBP, a cap-and-trade program designed to reduce ozone emissions during the summer when they’re most harmful.

These regulations and their successors, along with similar pollution-related policies like the Clean Air Act, have generally done what they were meant to. And according to recent research in PNAS, they’ve managed something else, too—they’ve made life better for birds. Although bird levels across North America have declined by an estimated 29% since 1970, things would be way, way worse without ozone regulations, this new finding shows. And the NBP in particular provides an opportunity to figure out the size of these positive effects.

After controlling for factors like weather, the changing seasons, and waxing and waning birder effort, they were able to come up with “a longitudinal database that tracks month-over-month changes in bird abundance, air quality, and regulation status” for several thousand US counties between 2002 and 2016. They found that higher than usual ozone concentrations meant lower than usual bird levels across the board.

Next, they looked into the specific impact of the NBP. Because the regulation started in a set year, and only applies in the summer months and to certain states, they were able to perform a few comparisons at once, to “isolate the changes in pollution and bird abundance that are specific to NBP-affected states and… months the NBP market is operating,” they write. Where and when the NBP was applied, ozone reduced by an average of 4.2 parts per billion, and average bird abundance increased by an average of .235 standard deviations from the norm (the actual number or percentage depends on the specific population in question). Small land birds account for most of this increase. This added the final link to the chain of events: more anti-pollution regulation → less ozone → more birds.

Read:  Car emissions are a wasted resource. We could use them to grow food.

Finally, they used these results to present what they call a “back-of-the-envelope counterfactual scenario,” in which American policymakers decided not to care about ozone and no regulation-related reductions occurred between 1980 and 2018. In this even smoggier alternate universe, “birds would have declined by an additional 1.5 billion,” they write. In other words, according to this analysis, “20% of the current bird population… be attributed to improvements in ozone concentrations over the past 40 years.”

It’s not just birds that have to worry about ozone. On top of respiratory effects, there is evidence that it reduces the productivity of entire ecosystems by inhibiting plant growth. This then messes things up for bugs, which affects birds, which undercuts mammals. In other words, the effects of one harmful chemical reverberate throughout the ecological web.

It’s nice to remember that the flipside of this is true—that the benefits of reducing such chemicals reverberate as well.