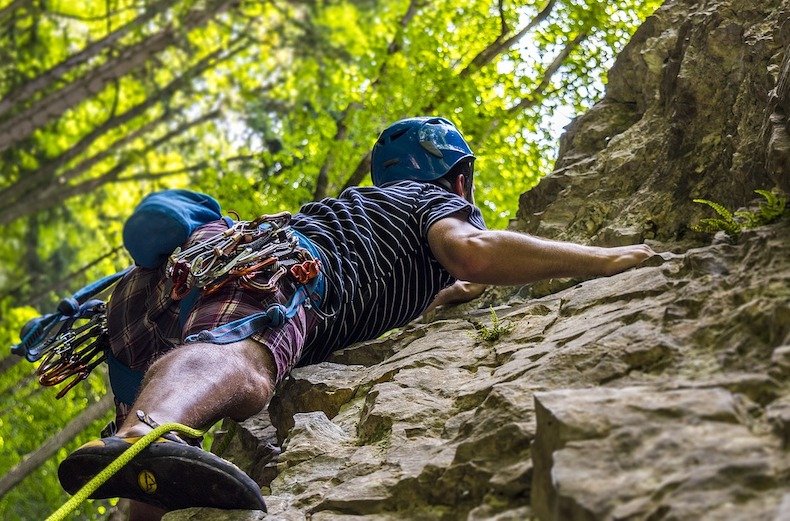 The same boulders that entice climbers also tend to house unique plants — try not to sprinkle them.
By Cara Giaimo
December 9, 2020

Every hobby has its environmental ups and downs. Despite its small footprint, rock climbing is no exception. A recent paper in Ecology and Evolution looks into some of the effects of climbing chalk, which climbers use to better stick to rocks — and which can itself stick around long after it appears to have washed away.

Daniel Hepenstrick, an ecologist at the Zurich University of Applied Sciences and the lead author of the new paper, studies mosses and ferns. In the Swiss lowlands, some of the regionally rarest of these plants grow on what are called erratic boulders: huge rocks brought by glaciers from the Alps to the country’s lowlands during the last Ice Age.

Because they come from a different geological area, these boulders are much more acidic than the the low-pH bedrock that surrounds them, and so unique plants thrive there. “For bryophytes that can’t cope with limestone, these rocks are like islands,” Hepenstrick says. They can’t survive anywhere else nearby.

But there’s another group of living things who love large, surprising rocks: climbers. Bouldering, which relies on just this type of rock, is growing more and more popular. And although it’s a low-equipment sport, many practitioners do like to use climbing chalk, a magnesium carbonate powder that helps bare hands get purchase. Because climbing chalk is very basic — exactly what many of the mosses and ferns clinging to the acidic rocks don’t want — Hepenstrick wondered whether this was messing things up for the plants.

To investigate, he and his coauthors searched for traces of chalk along some common routes in two popular bouldering areas. They also did a lab experiment, growing some of these rock-dwelling plants on agar plates containing different amounts of chalk.

They found that climbing chalk sticks around long after we can see it. Sixty-five percent of sampling sites along popular bouldering routes showed elevated levels of chalk even when none was visible. In the lab experiment, different species reacted in different ways — the more chalk was present, the less likely forked spleenwort was to germinate and survive, for example, while common polypody was less affected. Overall, “the plants of all species appeared less vigorous on climbing chalk media,” the authors write.

More study is needed to determine exactly how climbing chalk affects plants in the wild. In the meantime, Hepenstrick urges anyone who may be climbing on or near rocks that house unique ecosystems to take care, and avoid chalk if possible. This applies not just in Switzerland, but anywhere with igneous erratic boulders — which includes a lot of areas where people like to climb, from the Pacific Northwest to Maine’s Acadia National Park. “There’s a big chance that there are rare species growing there,” he says.