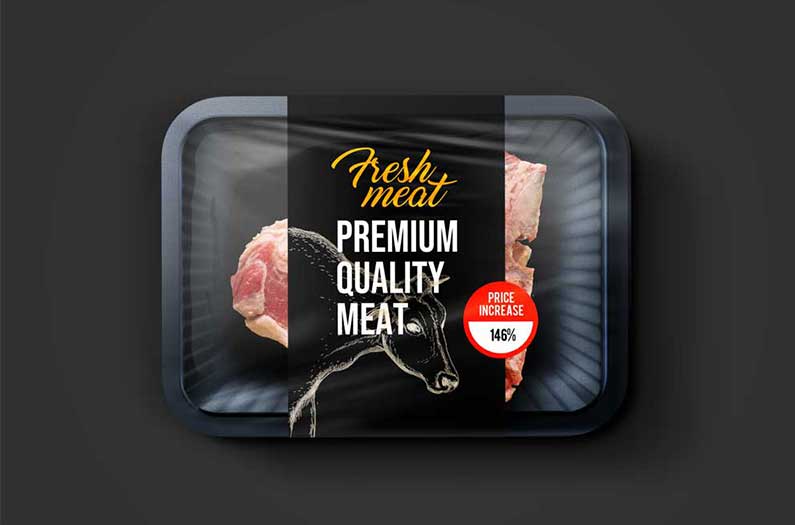 How much would food cost if we factored in planetary impacts?

When a research team ran the numbers, they discovered the largest differences were driven by the type of food, rather than the farming method
By Emma Bryce
December 18, 2020

The average steak should cost roughly 146% more than it currently does—if its price were to accurately reflect the environmental toll of farmed meat.

On the plus side, if we incorporated the environmental cost of food production into the price of our weekly groceries, it could encourage a shift towards greener plant-based diets, that would ultimately benefit the planet as well.

So says a new study published in Nature Communications. Its team of German researchers set out to expose all the invisible environmental costs that occur on the long trail of food production—from land use to fertilizers, methane emissions, to heating and transport—and then to close the cognitive gap between those impacts and the food we eat, by directly translating them into an actual economic cost for consumers. By looking specifically at the German agricultural context, they focused on meat products, dairy, and plant-based foods, and compared organic and conventional modes of production in each case.

This turned out some striking results—which started out with some familiar trends.

In terms of cost to the planet, the emissions incurred by the production of meat made this food type the most costly, followed by dairy products, and then plant-based foods. Generally speaking, compared to conventional farming, organic farming methods spruced up the emissions profile of dairy and plant-based products, making them less impactful to the planet. That’s because of organic farming standards that forbid the use of mineral nitrogen fertilizers, for instance—which brings down the overall emissions cost of this production method.

But, meat was a surprising exception: both conventional and organic methods of meat production led to similarly high emissions costs, the researchers found. That might be because organic livestock farming requires more land area to meet welfare standards, and because it’s generally less productive—two features that make it less efficient than conventional farming.

What’s more, a key trend the researchers noticed was that the largest differences in emissions were driven by the type of food, rather than the farming method. That suggests that choosing what we eat might ultimately have more influence on environmental health, than the way our food is farmed.

But the environmental impact was only part of what concerned the researchers: they also wanted that to be made tangible for consumers in an added economic cost. So, they showed that conventionally-farmed meat products would, on average, need to be almost 150% more expensive than they currently are to account for environmental harm. Dairy would have to leap by 91% in price.

By comparison, the estimated increase in the price of organically-produced, plant-based foods would be 6%.

The research hinges on the idea of the ‘polluter pays’ principle, which argues that those whose actions cause harm to the environment should bear the responsibility of paying for it. That would be embodied perfectly in the choice to eat a meatier diet over one with more plant-based foods—but only if the price of meat actually reflected the true environmental cost.

Not only does a piece of very cheap meat belie the true impact on our planet, it also provides no incentive to make better decisions for the planet. But if the ‘polluter pays’ principle is applied, the higher cost of meat might, by default, also encourage a shift away from more environmentally-harmful diets, towards greener ones.

Of course, there are nuances to this. Even the small increases in the price of vegetables and fruit that the study maps out might make food unaffordable for many consumers. And essential foods—which for many people, for complex reasons, may include dairy and meat products to ensure nutritionally-balanced diets—should not become unaffordable. That, in itself, would be unsustainable. Though getting too deeply into this question was beyond the scope of the study, the researchers did point to the value of government subsidies and social compensation measures, in helping to make this dietary transition fair for everyone.

And, if these changes were applied sensitively—with safety nets in place to ensure equitable access to nutrition—there would be a range of trickle-down benefits.

By driving more sustainable choices with cost, meat consumption would go down, the researchers predict—freeing up land area from livestock and feed production. That could be returned to nature, which would aid in the recuperation of ecosystems and the associated services that these provide to humans.

There’s another interesting element to this as well: by incorporating environmental costs into all foods, the usual chasm-like price difference between conventionally-farmed and organically-produced food would reduce. This could make organically-farmed food more appealing to consumers, who would then be purchasing food derived from farming systems that, in their ideal forms, support soil health, reduce pesticides, and fertilizer use. (This comes with one big caveat that organic farming requires more land—and so that shift could also lead to an unintentional increase in land-use change.)

It’s a complex picture, and one that will only be fully revealed by further research. But making environmental damage personal through the cost of food may also give consumers a more active stake in protecting the planet’s health. And that would circle back to benefit us, as well, the researchers write. “The approach presented here represents a contribution to the true costs of food, which—even with partial implementation—could lead to an increase in the welfare of society as a whole.”