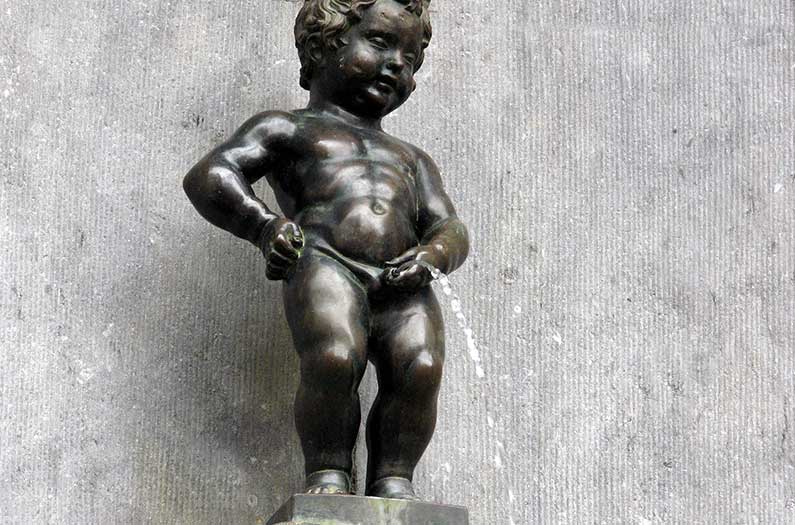 Manufacturing the fertilizer on which much of modern agriculture depends takes a heavy environmental toll. The phosphorus in commercial fertilizer comes from phosphate rock, a non-renewable resource, while nitrogen comes from natural gas and requires a lot of energy to produce.

But there’s an endless stream of renewable phosphorus and nitrogen available: yes, we’re talking about urine. And meanwhile, lots of energy and expense goes to removing nutrients like nitrogen and phosphorus from municipal wastewater.

“Both conventional wastewater treatment and fertilizer production are carbon intensive processes,” says Gregory Keoleian, director of the Center for Sustainable Systems at the University of Michigan in Ann Arbor. “Flushing urine with its valuable nutrients down toilets for processing in energy intensive wastewater treatment plants makes no sense.”

In recent years there’s been increasing interest in extracting nutrients from urine (as well as solid waste) to produce fertilizer. Now, researchers led by Keoleian have undertaken the most comprehensive, large-scale analysis yet of the environmental impact of urine recycling compared to conventional fertilizer production.  The study reveals that on multiple environmental measures, “peecycling” almost always comes out ahead.

The researchers conducted a life-cycle analysis assuming that 70% of urine would be diverted from wastewater systems to fertilizer production. They analyzed two different ways of producing fertilizer from urine: concentrating the nutrients using a process called reverse osmosis, or using chemicals to precipitate the nutrients out in the form of a substance known as struvite.

They compared the environmental impacts of these two approaches to those of conventional wastewater treatment and fertilizer production in terms of use of electricity, chemicals, and water, as well as production of effluent, sludge, and greenhouse gases.

This was a difficult task because no large-scale urine diversion systems of the kind the researchers aimed to model actually exist. “Systems for individual homes and community scale projects can also be effective but in order to have greater impact urine recycling systems it need to be deployed on a large scale,” Keoleian says.

The team used data from small-scale urine-diversion pilot projects, plus information on conventional wastewater treatment systems in Vermont, Michigan, and Virginia. They chose these three locations to help capture how differences such as electricity sources, effluent regulations, and population density affect the overall picture.

Producing fertilizers from urine involves new environmental impacts, such as infrastructure to collect and transport urine to the processing site, and chemicals to stabilize it along the way. Nevertheless, “Urine diversion consistently provides improved environmental performance relative to the conventional system for each scenario for all impact categories,” except for the potential to cause acidification of water bodies, the researchers write in Environmental Science & Technology.

The environmental impacts of urine concentration are generally less than those of struvite production. But both have a smaller footprint than conventional wastewater treatment and fertilizer production when it comes to greenhouse gas emissions, energy use, freshwater use, and potential to cause harmful algal blooms in water bodies.

The picture is a bit more complicated when it comes to acidification potential. Here urine concentration provides modest improvements compared to the conventional approach, while struvite precipitation fares worse.

Overall, though, “Our analyses clearly indicate that the well-defined benefit—reduced wastewater management requirements and avoided synthetic fertilizer production—exceed the environmental impacts of urine collection, processing and transport, suggesting that further efforts to develop such systems are warranted,” lead author Stephen Hilton, who conducted the study for his master’s thesis at the University of Michigan, said in a statement.

Lots of details remain to be worked out, such as the right scale of infrastructure for urine collection (which might differ from one city to the next). But the environmental benefits of producing fertilizer from urine are likely to become even greater as further research refines the process, the researchers say.