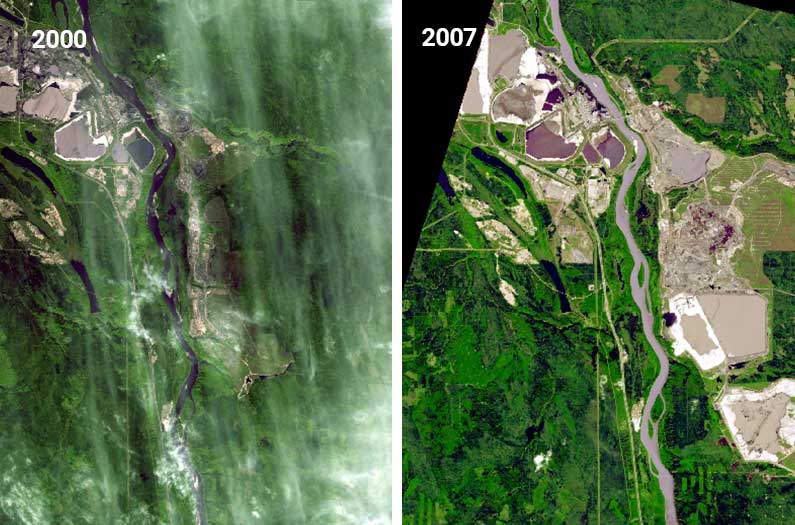 They then trained image change detection algorithms on “before and after” images of places that have recently been cleared, built on, or even covered in solar panels.
By Cara Giaimo
December 16, 2020

Habitat destruction is a key driver of biodiversity loss. While laws exist to protect certain swaths of land from degradation, enforcing them can be difficult. The stakes are high—once a mountaintop is mined or a forest razed, the damage can’t be undone.

In a recent paper in Conservation Biology, researchers propose a relatively new tool: satellite imagery. Familiar to laypeople through software like Google Earth, overhead snapshots of the planet can be run through algorithms in order to “identify and quantify land-cover changes and habitat loss,” the authors write, potentially enabling “systematic conservation monitoring.”

Conservationists and others concerned with biodiversity protection already use satellite imagery to find new study areas, estimate unregulated fishing activity, map global forest loss, locate plastic in the ocean, and draw people’s attention to specific and spectacular cases of habitat destruction. But there aren’t many tools that can effectively scan an area of concern and watch for changes.

The current lack of reliable, broad-scale monitoring has several related effects, the authors write: Researchers can’t know the extent of current habitat degradation in order to recommend new protections, existing protections aren’t enforced, and this lack of enforcement snowballs, sending “a message to other actors that they can likely get away with habitat destruction without facing consequences.”

To address these issues, Evans and Malcolm—who are both part of the Center for Conservation Innovation, an NGO associated with the nonprofit organization Defenders of Wildlife—built automatic habitat loss detectors out of two existing algorithms: one used by the U.S. Geological Survey to keep track of land cover change, and one more general tool that analyzes differences between images. They trained their algorithms on “before and after” satellite images of places in the United States that have recently been cleared, built or paved over, or covered in solar panels.

They then tested them on four different real-life areas where species are under threat, including Wright, Wyoming, where oil and gas drilling threatens Greater Sage Grouse habitat, and Gulf County, Florida, where residential construction imperils the St. Andrew beach mouse. They ran before and after photos through their algorithms to determine how much land change had occurred. To provide a “ground truth” comparison, human experts analyzed the photos in the same way.

The algorithms “effectively detected habitat loss” in all four case studies, and did so “faster than human review”—the analysis took less than an hour, while people spent hours or several days poring over the photos, the authors write. They also worked on a variety of environments, from deserts to forests, and even found some spots that people missed, although there were false alarms as well.

In these cases, the land use changes that took place were legal—but they aren’t always. The authors hope the “efficacy, efficiency, and flexibility” of these tools will encourage stakeholders, including regulatory bodies, to adopt them.

In the meantime, they have already put their own tool to use—after the algorithms found sand mining was encroaching on the habitat of the dunes sagebrush lizard, Defenders of Wildlife, along with the Center for Biological Diversity, officially petitioned the Department of the Interior to list the species as threatened or endangered, and to protect the dunes where the lizards live. If it works, eyes in the sky will have made an impact on the ground.