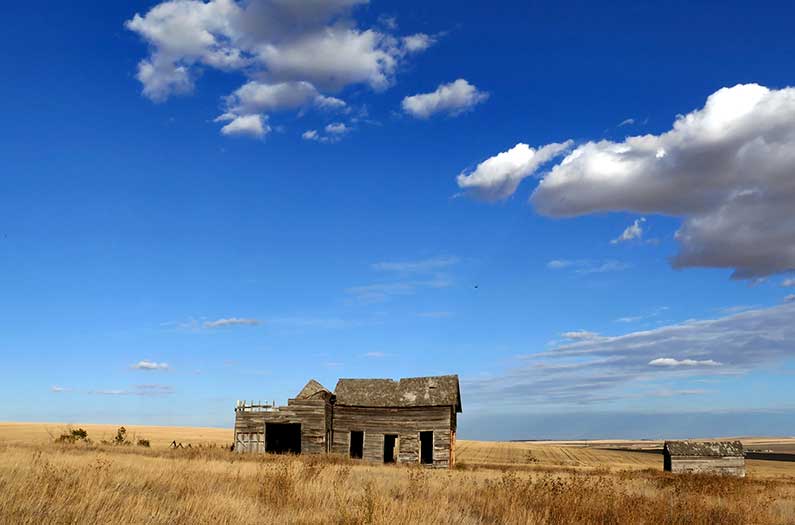 Researchers investigate pathways by which biofuels could provide a third of the world's green energy needs
By Emma Bryce
January 29, 2021

Spread across the planet are millions of hectares of abandoned cropland, lying fallow and unused. But if we used this empty land to grow biofuel crops, we could meet a significant share of our green energy needs going into the future—while simultaneously limiting the land-guzzling impacts of biofuels that give them a bad name.

That’s the neat solution offered by a team of researchers, whose recent study appears in Nature Sustainability. They argue that as our future energy needs increase, there’ll be growing pressure to replace some share of fossil fuels with more sustainable green fuels derived from plants like corn and switchgrass.

Yet, with the rapid spread of agriculture and development, land is now at a premium on our planet. This makes bioenergy crops controversial, because growing them either usurps land that could be used for food production—potentially heightening food insecurity—or causes fresh land clearing that threatens wild habitat and biodiversity.

The researchers on the new study see a possible solution in the planet’s swathes of empty unused land. “Large, unproductive areas exists around the world which until recently were used to produce food,” says Jan Sandstad Næss, a PhD candidate at the Norwegian University of Science and Technology, and lead author on the new study. “These areas show a large potential for bioenergy production with minimized environmental impacts, as they are mostly still cultivable.”

Using satellite maps of landcover, Næss and colleagues estimated that there are 83 million hectares of abandoned farmland globally that would be available for biofuels production. That’s the equivalent of 5% of current cropland or about the size of both Sweden and Norway combined. And if we converted all that land into biofuels, we could meet a striking share of demand—up to 68% of today’s bioenergy demand, or almost 50% of demand by 2100 (as the need for fuel will increase.) Half this free farmland is roughly split between Asia and Africa, with about 20% occurring in Europe, ready for uptake.

Or so it seemed—until the researchers investigated further, and the picture became a little more complex. Because it turns out that abandoned cropland isn’t always in the most suitable places for farming in the present day. Some of it is spread across locations that have become important for biodiversity conservation, while in other regions water scarcity is a pressing issue that makes agriculture impractical.

So to come up with a more realistic estimate, the researchers then examined the tradeoffs between biofuels production and the environment in these different scenarios. They looked at several variables—the different varieties of biofuel crops, context-specific water requirements, and varying degrees of agricultural intensification—to form 296 combinations that thoroughly investigated the impact and potential of biofuels. This helped them identify the most sustainable compromise.

They found that if we avoided water-scarce regions, and sidestepped areas that are important for nature conservation, the biofuel production potential of abandoned croplands would have to drop to 35%, compared to the previous 68% estimate. That’s still a substantial figure, considering that all this potential arises from land that’s lying untended and unused.

It would still require an 8% increase in water use, because despite avoiding drier regions, increasing the amount of irrigation in the locations where bioenergy crops could still be farmed is the most efficient way to increase production with limited land. (Otherwise, to reach the same production levels, lower water availability would mean we’d need to grow crops over larger stretches of land—which is the less attractive trade-off for our land-squeezed planet.)

Beyond reducing carbon emissions from fuel, growing biofuels on abandoned farmland may have other, subtler benefits as well—such as creating new income sources for rural populations, and increasing the amount of carbon captured by plants in the soils of formerly vacant farmland. Filling empty land with flowering grasses may also help to increase biodiversity in some areas. (Though on this note the researchers point out that there are other, possibly better, ways to use empty farmland—such as for reforestation, which might bring larger environmental rewards.)

The study reveals that if bioenergy production is carried out with consideration for the planet, the trade off is that production will be limited—though still significant enough to have a considerable environmental benefit. As pressure mounts to find ways to meet the world’s green energy needs, this research provides a necessarily clear-eyed look at how bioenergy could contribute most sustainably to the goal of greener fuels, through the latent power of abandoned farms.