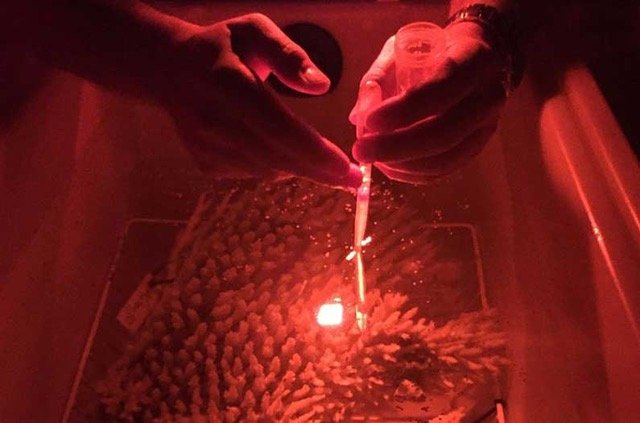 The work may guide selective breeding and other conservation efforts in the face of rapidly warming oceans
By Berly McCoy
January 13, 2021

Since the first of five mass bleaching events hit the Great Barrier Reef in 1998, scientists have been trying to figure out how to protect corals from the increasing ocean temperatures caused by climate change. But the key to coral survival may already be inside of them.

Until recently, teasing out a coral’s response to heat on the molecular level was tricky. But that was before the widespread accessibility of the gene editing tool CRISPR, which allows molecular biologists to add and remove individual genes. In a paper published in the Proceedings of the National Academy of Sciences, researchers used CRISPR to pinpoint a coral gene that protects them from heat stress. “Understanding the genetic traits of heat tolerance of corals holds the key to understanding not only how corals will respond to climate change naturally but also balancing the benefits, opportunities and risks of novel management tools,” said Line Bay, a coral biologist at the Australian Institute of Marine Science in a press release.

Based on simultaneous research on a coral relative, the researchers had a hunch that a protein called Heat Shock Transcription Factor 1 (HSF1) could play a major role in coral heat tolerance. To test the idea, the team used CRISPR technology to mutate the genetic blueprints for HSF1 in coral larvae.

Researchers injected coral eggs with the CRISPR cocktail to disrupt HSF1 protein production. To understand the effect that removing HSF1 had on heat tolerance, the team then turned up the temperature from 27 to 34 degrees Celsius once corals reached the larval stage. They found that while coral larvae with intact HSF1 gene survived, two thirds of the mutants died. Genetic testing showed that the surviving third of mutant corals had actually retained some of the non-mutated HSF1 gene, bolstering the idea that it’s a key factor in heat tolerance.

While using CRISPR to parse out corals’ response to stress is an exciting new tool in the conservation toolbox, both to fill in the biology blanks and to better understand possible management tools like selective breeding, the authors warn against engineering heat-resistant strains of corals any time soon. They write “such attempts should be approached with extreme caution, given that our understanding of the underlying biological mechanisms remains so primitive.”

Source: Cleves, Phillip et. al. Reduced thermal tolerance in a coral carrying CRISPR-induced mutations in the gene for a heat-shock transcription factor. Proceedings of the National Academy of Sciences 2020