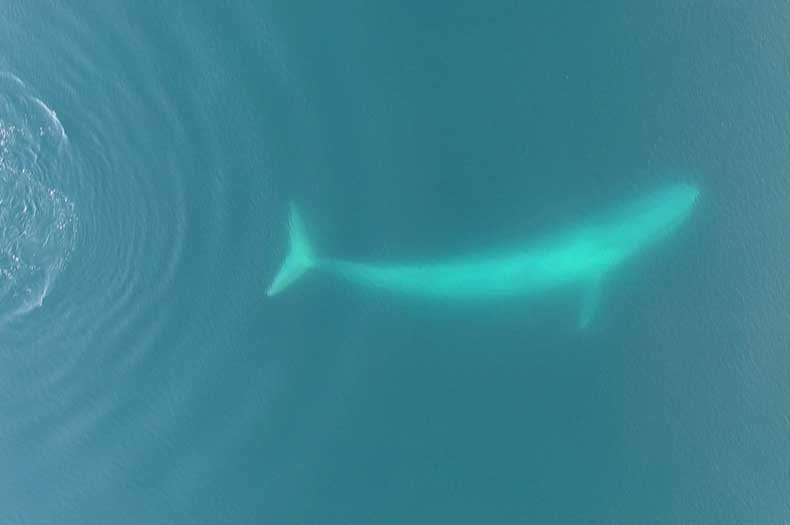 Nearly a century after being extirpated, blue whales are moving back to South Georgia Island

Now that whaling has been outlawed for decades, populations are beginning to heal—but they face new threats.
By Cara Giaimo
January 6, 2021

The blue whale—the largest animal to have ever lived—subsists almost entirely on krill, one of the smallest. A blue whale scarfs about 2,500 pounds of krill every single day. It takes a special place to support such a diet, and one such spot is South Georgia island, in the southern Atlantic. Until the beginning of the 20th century, the ocean around South Georgia housed an incredible density of these massive cetaceans, along with humpbacks, fins, seis, southern rights, and sperm whales.

Then came the industrial whalers. In 1904, the first whaling station was established on South Georgia, to help slake the world’s growing thirst for oil. Ships began hunting down humpbacks and chopping them up. When they had decimated that species, they turned to blue whales, sometimes killing 3,000 in a single season. “In the early 1900s, South Georgia waters thronged with blue whales,” write the authors of a recent paper on the population. Scarcely thirty years later, “they were all but gone.”

But now, 80-odd years after that, the blue whales may be returning. After decades of few to zero blue whale sightings around South Georgia, recent surveys have found dozens of them in the area, reports the study, which was published late last year in Endangered Species Research. It’s one of a few recent population upticks that, combined, suggest that the great ecological gash of industrial whaling may finally be beginning to scab over.

The scale of slaughter involved in industrial whaling is difficult to imagine. Just a few decades of the practice reduced the population of Antarctic blue whales in the Southern Ocean overall “to 0.15% of their estimated pre-exploitation abundance,” the authors write—meaning that for every whale who survived, roughly 666 were killed. After commercial whaling was banned in 1986, many species began recovering; by 1998, Southern Ocean blue whale populations had returned “to around 1% of pre-whaling levels,” the authors write.

But few had come back to South Georgia. Visual and acoustic surveys of the area between 1997 and 2017 found zero, or perhaps one or two, blue whales. The deaths of so many members of a particular generation may have caused “a loss of cultural knowledge of the habitat as a feeding area,” the authors write. (Or perhaps the content of that knowledge simply shifted, and younger whales learned to avoid such a bloody place.)

Then, just a couple of years ago, they started showing up again. A survey cruise in 2019 spotted 9 individual blue whales. In 2020, a group of scientists looking for southern right whales counted 58 blue whales during their circuit—”substantially higher sighting rates than any previous year since the end of commercial whaling,” the authors write. Acoustic monitoring, which has become more common in the past few years, has been picking up blue whale songs all around the island.

Whaling at South Georgia presents “one of the clearest examples of 20th century industrialized exploitation of wildlife,” the authors write, because its impacts were so swift and so extreme. “It was widely thought that blue whales might never be seen again in significant numbers” there, and it’s not clear why they are starting to come back. Perhaps individual whales are discovering the good eating available there and telling others. Or perhaps they’ve been around for a while, in places we weren’t looking. Scientists will have to keep monitoring the population there to see if it continues to grow, the authors write.

But so far, it seems this may be one of a few encouraging signs of recovery in some of the species once most heavily targeted by whaling. As marine geographer Lauren McWhinnie wrote this week in The Conversation, humpbacks are returning to the Antarctic Peninsula, and bowhead whales to the Arctic. There, they’ll face more man-made obstacles, including expanded marine shipping routes, which can bring with them collisions and confusing noise.

The blue whales of South Georgia island are also susceptible to these threats. More and more boats are coming to the island, which now houses a seasonal krill fishery. It’s a gift, not a given, that these spectacular whales have returned. Let’s not drive them away again if we can help it.