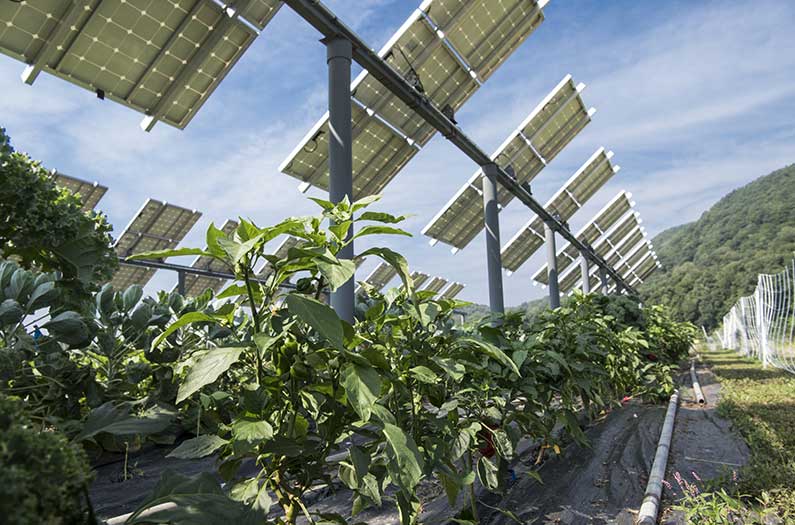 Sharing pays off, a new study finds. If farmers in the United States can be convinced to share just 1% of their land with solar panels, they could generate 20% of the country’s electricity with that minor sacrifice. This suggests that the goals of food production and sustainable energy production need not be at odds—but could in fact combine forces to produce some impressive environmental benefits.

The recent study adds to a body of research that looks at the potential of agrivoltaics—the practice of installing sunshine-harvesting solar panels above crops and pastureland—to expand renewable energy production (crucially, without taking up more precious land in the process). But instead of exploring the benefits of solar panels at individual test sites, as has been done frequently before, the Oregon State University researchers on the new paper sought to understand the potential of agrivoltaics on the country scale.

“We wanted to jumpstart the conversation by making order-of-magnitude calculations about what the macro-level impacts of agrivoltaics could be,” says Kyle Proctor, a graduate fellow at Oregon State University and author on the new research.

By factoring in everything from the costs of the solar arrays, to land requirements, emissions savings, and how much employment such a project would create, they revealed a compelling picture of what the US food and energy landscape could look like in years to come.

Occupying an area of farmland spanning 13,000 square miles—which is about the size of the tiny state of Maryland, or less than a percent of the country’s farmland—the researchers found that solar panels could produce 20% of US energy, renewably. If such a large share of the energy budget were devoted to renewables, this would avert 330,470 metric tonnes of carbon dioxide equivalent each year—which is the same as suddenly removing 71,000 polluting cars from the road.

A project of this scale would require a seven-fold increase in the number of solar panels currently in the United States. Yet, the massive advantage is that these could all be rolled out without taking up any extra land or destroying habitat.

The cost of producing and installing these panels is considerable at first glance —about $1.2 trillion spread over the course of the project, which is expected to be roughly 35 years (about the lifespan of the average solar panel, before it would need to be replaced). Despite this hefty initial investment, the researchers point out that this would still amount to less than 1% of the annual US budget. And besides, the revenue generated by these solar arrays would pay off those initial costs within 17 years, they estimate. From thereon, this system of country-wide agrivoltaics would produce 35.7 billion in revenue, each year.

Producing, building, and installing panels also requires people to do those jobs—and the social benefits of agrivoltaics are not to be sniffed at. In fact, the researchers calculated that even a project of this relatively modest size could create employment for 117,000 people—and those jobs would be sustainable, lasting for 20 years.

All of this benefit would come with very little—or potentially no impact—on crops themselves. Preliminary agrivoltaics research suggests that the panels may cause slight declines on the productivity of some plants. But with their shading and cooling effect, panels are thought to boost the production of others, in fact. And panels don’t necessarily need to be set up on cropland: hovering over stretches of pasture, they could provide some welcome shade to grazing livestock, while harvesting the sun’s energy.

Agrivoltaics also chimes with certain political goals, which could give it some weight in the future.

The Green New Deal—a global concept, and in the United States specifically, a package of proposed legislation—lays out a vision of the future where we could tackle socioeconomic inequality and the climate crisis, by reinventing an economy built around renewable energy. Agrivoltaics slots in neatly with these general goals, because it would bring down emissions while simultaneously creating thousands of green jobs. (Though, the researchers caution that it’s not yet clear whether this employment benefit would be offset by jobs lost in the fossil fuel industry.) Furthermore, solar panels could also make agriculture more sustainable by reducing water use (thanks to the shade), and potentially agricultural productivity as well.

And by creating a second income stream for farmers, as well as local jobs, agrivoltaics could support another of the Deal’s major goals—help for rural populations. “There is a widening divide between rural and urban communities, and renewable energy is often framed as something that benefits urban communities.” Proctor says. “But with agrivoltaics we have the potential for a true win-win. More renewable energy, and economic investment in essential rural communities.”

Putting solar panels on farms obviously won’t be a panacea for all of agriculture’s problems. But, Proctor believes that at the very least, it represents “a tangible, feasible pathway for both addressing climate change and shifting American agriculture towards more sustainable production.”