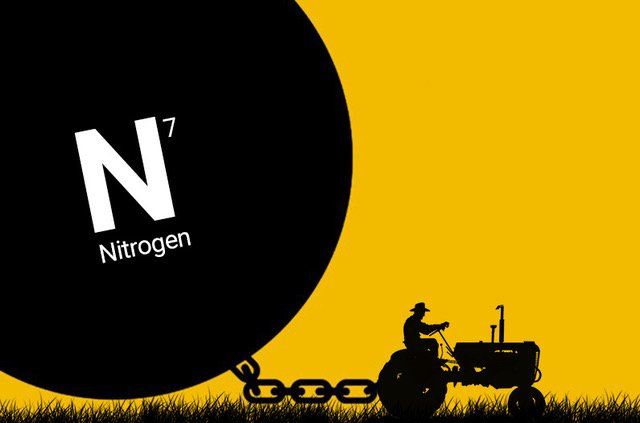 Researchers have produced a map identifying 20 vital hotspots across the United States where nitrogen – essential for crop growth, but hugely polluting in excess – is being overapplied.

Their study homes in on some of the social and economic reasons why farmers are overly liberal with nitrogen, which could help target interventions to reduce its environmental impact in years to come. “These hotspots have features that suggest making progress is possible,” says Eric Roy, lead author on the study, and assistant professor at the University of Vermont.

Nitrogen pollution arises from synthetic fertilizer and manure, two ingredients that are used to boost productivity on farms. But often, the amount that’s ploughed into the soil is in excess of what plants can absorb, leaving behind a nitrogen residue. Farmers may overshoot because it’s difficult to judge how much plants need, and because understandably, their bigger worry is the risk of underapplying nutrients – which would cause definite declines in productivity.

This might explain why an estimated 50% of nitrogen applied to the world’s croplands today goes to waste. The problem with these leftover nutrients is that they get carried in groundwater and run-off, going on to pollute rivers and causing massive dead zones in the sea. Fallow excess nitrogen is also easy prey for billions of soil microbes that transform it into nitrous oxide, a potent greenhouse gas hundreds of times more powerful than CO2. In fact, nitrous oxide is one of the main reasons why agriculture makes such large contributions to climate change.

To understand the scale of this problem in the US context, the researchers mapped out nitrogen use and combined it with data on crop production across the country’s roughly 3000 counties. This generated a heatmap of sorts, revealing where the nutrient is being applied in excess of need. The researchers homed in on places where reducing nitrogen wouldn’t harm crop yields.

This exposed 20 hotspots – the biggest of which occurred across a spread of 61 counties in the states of Illinois, Indiana, Missouri, and Wisconsin. There, a surplus of 374,000 metric tons of nitrogen is annually applied. By area, that amounts to a striking 63 kilograms of surplus nitrogen per hectare, each year. This hotspot was closely followed by another in a span of 55 counties across Kansas and Nebraska, where 362,000 metric tons of excess nitrogen is heaped into the soil each year.

Overall, the researchers’ nitrogen map shows that many smaller hotspots are scattered predominantly across the country’s eastern half, while a few dense concentrations appear along America’s west coast. Across the 20 hotspots, which incorporated a total of 759 counties, a massive total of over 2.5 million metric tons of surplus nitrogen was applied per year. This figure accounts for 63% of all the excess nitrogen pollution that’s spread across farmland in the country. Yet, this large majority occurs on just 24% of the land. That’s a good thing, because it means that targeting interventions to this smaller area will be able to deal with a bulk of the problem.

This is also why the study is unique – not just for its county-level granularity – but also because the researchers linked several social, economic, and farm characteristics with nitrogen overuse. That makes it easier to identify targets for action, going forward. “We go beyond a description of the problem and provide new perspective on where efforts to reduce excess nitrogen use are most likely to succeed,” says Roy.

For example, a lesser belief in climate change, high farm running costs, and low soil productivity emerged as solid predictors of nitrogen overuse at the county-level, the researchers found. These insights could be used to inform new policies, like financial incentives that encourage sceptical farmers to limit the quantity of nitrogen they plough into the soil.

“The adoption of incentive programs has been low so far. Where should program managers invest their effort?” says Meredith Niles, co-author on the study and assistant professor at the University of Vermont. “Our work can help guide them to counties where diverse factors – ranging from climate change belief to soil productivity – indicate potentially greater likelihood of more efficient nitrogen use and reduced negative impacts.” The findings could also work jointly with emerging precision agriculture technologies – like nitrogen soil sensors – to identify where the greatest benefits can be achieved for farming and the environment.

The researchers also discovered that areas devoted to growing crops for animal feed were notably associated with higher nitrogen applications, “highlighting the link between food system trends toward meat consumption and nitrogen dynamics,” they write in their study. That underscores another way to bring down nitrogen pollution – albeit through the much bigger challenge of changing diets.

This is all very pertinent, in light of recent research showing that nitrous oxide emissions have increased by 30% in the last 40 years – in large part due to fertilizer use. That rising trajectory threatens to unseat the Paris climate emission targets, if nitrogen use isn’t curtailed.

Next, the researchers plan to study the application of phosphorus across the US, “another essential nutrient that we need to manage better to support productive food systems while protecting the environment,” says Roy.