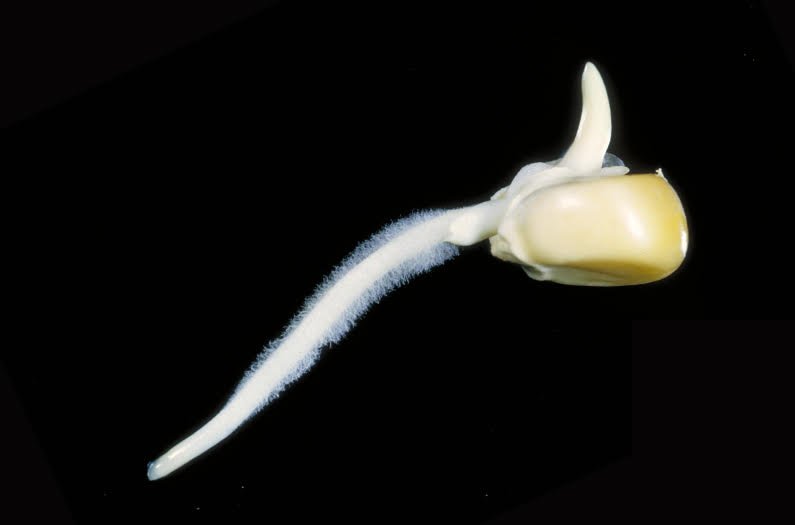 A newly-discovered plant trait instils roots with a super strength

Maize plants with this trait can punch through dry, hard, compacted soils, giving them a leg up in a climate changed world
By Emma Bryce
February 5, 2021

Researchers have described a never-before-identified trait in plants that can instil their roots with super strength, enabling them to push deeper into dense, compact soils to reach water and nutrients further below.

The new discovery could be a boon in a world where industrial agriculture and climate change are damaging soils, making them increasingly drier, more compact, and unyielding.

The intriguing plant feature was unknown, until the team of American and British researchers on the new research noticed that the anatomy of roots in some maize and wheat plants was characterised by small, thick-walled cells that clustered near the surface. They gave this unusual feature a name – ‘multiseriate cortical sclerenchyma’ or MCS for short – and then set out to understand how it affected growing patterns.

By raising maize and wheat plants first in the laboratory, then graduating to the greenhouse, and then finally testing both maize and wheat plants in real-world field conditions, the researchers revealed that plants containing MCS had significantly stronger, more flexible, and altogether more resilient roots compared to those that didn’t.

When crops were grown in intentionally tough and compact soils in the researchers’ field experiments, the maize plants especially grew strikingly well – stretching a full 22% deeper into the soil than plants that lacked MCS. In the lucky crop varieties that have it, this trait seems to “help plant roots punch through hard, dry soil to grow deeper, improving crop productivity,” explains Hannah Schneider, lead author on the study and a plant scientist at Penn State College of Agricultural Sciences.

In fact, Schneider and her colleagues found that the experimental plants also produced almost 50% more biomass than plants without MCS, likely because they were able to access more nutrients further down in the soil. A closer inspection of roots also revealed that wheat and maize roots with MCS were respectively 57% and 50% stronger when bent at their tips, compared to plants without the special trait.

Furthermore, in a direct test of the plants’ resilience, wherein the researchers tried growing plant roots through a layer of wax, the MCS-strengthened maize and wheat plants were each 48% and 62% more capable of penetrating the waxy layer, compared to varieties of those plants that lacked the strengthening MCS.

These super-root features seem to be connected to a higher concentration of lignin in plants with MCS, an organic polymer that helps to shore up plant walls and make them more rigid. That could explain why plants with these features are more flexible, and able to force their way into unwelcoming soils without buckling, or being squashed.

But if the beneficial MCS trait is bred into more crop varieties, plants could develop more extensive, stronger root systems that would reach these resources farther down. This might enable crops to grow better on farms with infertile topsoils, or on lands affected by drought – potentially making areas of damaged farmlands more productive once again, and boosting food security.

Encouragingly, MCS traits have been identified in about 50% of modern corn, wheat and barley varieties – meaning it could have real potential for improving production of some of the world’s most  nutritionally-important crops.

Investigating specifically how different staple crops with MCS traits fare under conditions of drought and low soil nutrition will now be the researchers’ new focus.

“The ultimate goal would be to incorporate the MCS trait into breeding programs to help plants grow deeper roots, which is important for nitrogen efficiency and drought tolerance,” says Schneider. “Breeding for MCS may be helpful in the development of new crop cultivars for climate mitigation.”