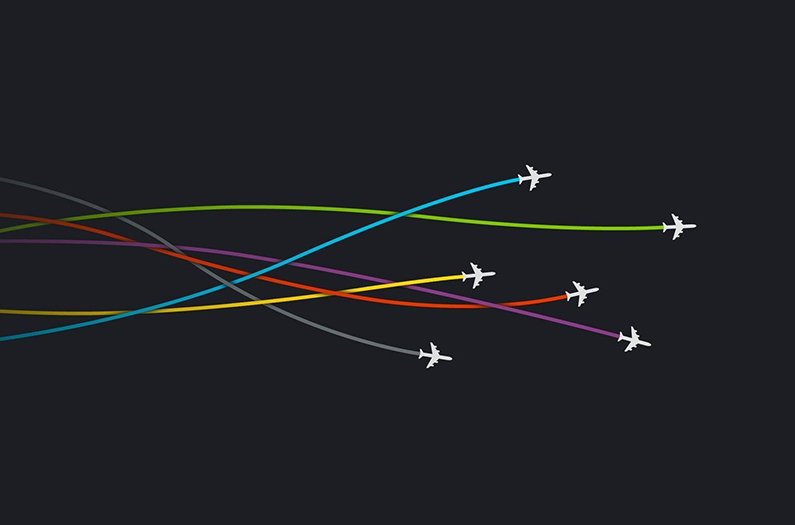 Airplanes could cut emissions by being better wind-surfers

It’s a quick, safe and relatively simple way to save up to 16 percent of fuel burned on transoceanic flights while the industry waits for biofuels and electric craft
By Prachi Patel
February 11, 2021

Intercontinental flights crisscrossing the Atlantic Ocean might be flying much longer distances and using more fuel than needed, researchers say in a new Environmental Research Letters paper. Instead, by better coasting on the jet streams that circle the globe, they could easily cut their fuel use and emissions.

The aviation industry is under pressure to reduce its greenhouse gas and other emissions, and it has taken steps to decarbonize. Aircraft are lighter and more fuel-efficient than they used to be. A few airlines have started using biofuel blends. Small hybrid-electric and battery electric aircraft are starting to take off, and Airbus is looking into hydrogen-powered zero-emissions aircraft.

But all these new technology options are expensive and many won’t be realistic on a large scale any time soon. As a quick and efficient solution, it’s time to move away from the structured flight tracks that airplanes currently follow to a more flexible system, says the paper’s lead author Cathie Wells, a Ph.D. student in mathematics at the University of Reading. “Airlines must act quickly to make flight sustainable.”

For decades, aircraft flying across the North Atlantic have mostly followed organized tracks. But not all planes can take advantage of the wind. The capacity of the most efficient routes is limited to keep huge distances between the craft. That’s because of a lack of radar over the ocean that can trace aircraft in real-time. But a new network of low Earth orbit satellites now being tested should be able to precisely follow aircraft flying all over the globe.

Wells, atmospheric scientist Paul Williams and their colleagues studied 35,000 flights between New York and London flying in the winter from December 2019 to February 2020. They compared the actual routes the airplanes took with the fastest route that would have been possible by hitching a ride on the eastward jet stream. The flights saved on average 1.7 percent of fuel when flying west and 2.5 percent when flying east. The highest savings were 7.8 percent and 16.4 percent respectively.

By using more flexible routes, aircraft could take advantage of the high-altitude air currents to their benefit when going east, and could avoid the headwinds that slow them down when going the other direction.

Current flight tracks so take wind into account, but they are not designed to be efficient and flexible, Wells says. “By being more flexible routes can access pockets of wind that might not be available on a straight track between entry and exit points.”

Wells says that NATS, the UK’s leading air traffic control services provider, has expressed interest in potentially disbanding the organized track system. She will be meeting with them in the next few weeks to discuss her findings.