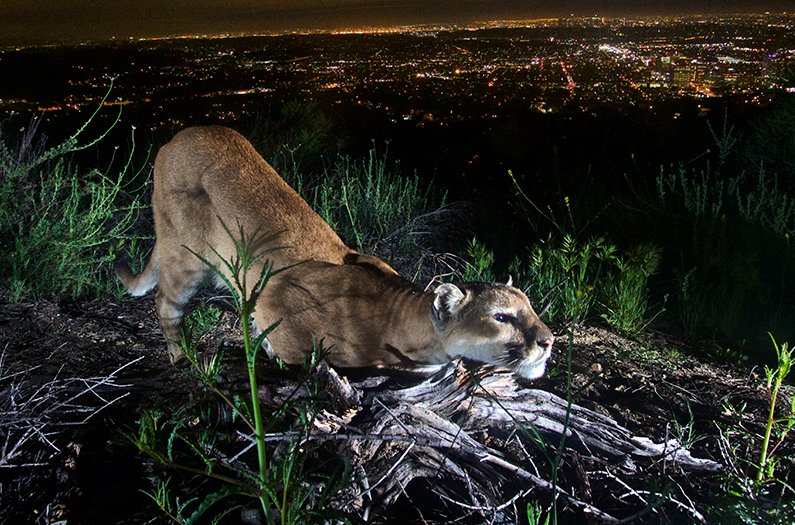 Who’s afraid of who?

Mountain lions fear and avoid humans—even more so than we fear them. Researchers have now calculated the cost of that fear: drastically reduced home ranges
By Berly McCoy
February 3, 2021

Scientists know that fear can change how animals behave in the wild—from where and what they eat to how many offspring they produce. But this “landscape of fear” doesn’t usually take into account how much energy the animal expends due to that fear. A new study on California pumas finds that the energetic costs of traversing a rugged environment in human-adjacent landscapes couple to drastically change the animals’ home ranges.

“Combining fear and energetic costs of movement in a common currency…may dramatically improve our ability to predict space use in free-living wildlife,” write the authors of the study published in Proceedings of the National Academy of Sciences. Pumas, also commonly known as mountain lions, panthers and cougars, stalk their prey so as to conserve calories for the energetically-costly pounce. The study authors purported that small changes in how these mammals move through their environment—in this case due to fear of humans—could have a large impact on their energy demands.

For more than a decade, California researchers have studied the pumas that reside in the Santa Cruz mountains to better understand their movements and how humans define it. While the study area consists of chunks of undeveloped forests, mountain peaks and valleys, it is adjacent to dense urban developments and crisscrossed by a number of roads. Due to the human interactions this proximity facilitates, scientists have ample evidence that pumas fear people.

To understand the energetic demands the cats expended in their movements in response to both the landscape and human presence, the team compared collar tracking data to topography and housing density maps. But the collars fitted to the 13 adult pumas—five female and eight male—didn’t only track movement. They also measured acceleration over the two month study period. The researchers used the combined data to calculate the number of calories pumas burned.

The team found that when pumas were closer to housing densities their movements were more energetically costly—moving more quickly and stopping less often. Overall, pumas expended 13 percent more calories per five-minute period than they would in remote areas of identical physical terrain. And the cost of movement increased with proximity to humans four to ten times more than it rose with increasing slope and ruggedness in the terrain. These costs translated into less distance travelled per day and smaller home ranges. For male pumas, this resulted in a marked decrease in home range size—78.8 percent smaller for those in the densest areas of development.

The study introduces an important new way of understanding animal movements by incorporating the cost of avoiding predators into a species’ energy landscape. For the Santa Cruz pumas, the findings also shed light on the importance of preserving undeveloped areas. “If we continue to develop California in the way we historically have, we’re going to lose this species,” said Chris Wilmers, wildlife ecologist and senior author on the study, in a press release. “But if we focus our development on making housing more dense in the areas where it already exists, like cities, then we stand a chance of keeping mountain lions with us well into the future.”

Source: Nickel, B. A. et al. Energetics and fear of humans constrain the spatial ecology of pumas. Proceedings of the National Academy of Sciences. 2021