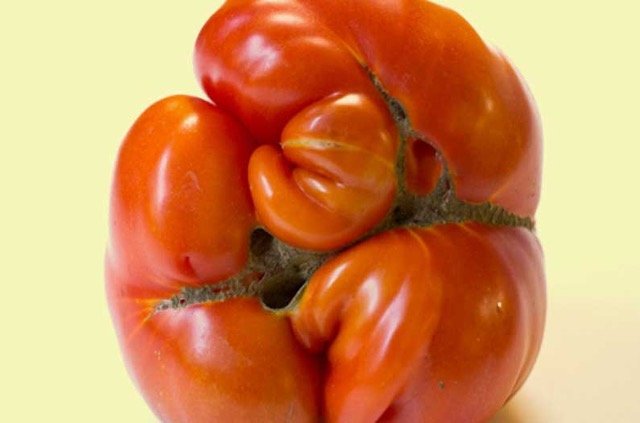 In a surprising discovery, researchers found that shoppers were more likely to buy wonky produce labeled as 'ugly' than wonky produce left unlabeled or called ‘imperfect’
By Emma Bryce
February 26, 2021

Researchers have discovered that it’s no good beating about the bush when trying to sell wonky fruit and vegetables: when grocery stores take a direct approach and advertise it as ‘ugly produce’, consumers are more likely to purchase it—and in the process, save tons of perfectly decent fresh produce from a sad decline in the landfill.

Existing research shows that consumers perusing the aisles of a grocery store perceive produce that’s oddly-shaped or marked as simultaneously lower quality, less tasty, and less healthy. This ‘ick’ factor is something most of us can relate to—but it also leads to massive and completely unnecessary losses of good, fresh produce every year. An estimated $15.4 billion in edible produce is ditched annually by retailers in the United States alone, some of which is attributable to consumer rejection of unpopular fruit and vegetables. What’s more, up to about 30% of farmers’ crops are deemed unfit for sale in supermarkets, because they don’t meet aesthetic standards, write the researchers.

But, consumers’ buying habits are also a powerful tool to try and reduce some of this catastrophic waste. And so the researchers on the new study wanted to determine whether a bit of psychological manipulation might steer their decision making towards the unloved fruit and vegetables.

Over the course of seven separate mini-studies, split between online and field research and each involving hundreds of participants, they investigated whether directly labelling fruit and vegetables ‘ugly’ when they were oddly-shaped or marked, would encourage buyers to purchase it more willingly than usual. They also measured up how the ‘ugly’ label compared with other types of commonly-used labelling—like ‘imperfect produce’ or ‘produce with personality’—in convincing buyers to give it a try. They explored how price discounts shape people’s decisions, too.

What they found was unexpected: the more candidly retailers pointed out the flaws of fruit and vegetables, the more likely buyers actually were to purchase it. This meant that wonky produce labeled as ‘ugly’ was significantly more likely to be snapped up, compared to wonky fruit and vegetables without that label. In one study, buyers were 20% more likely to buy produce that was clearly labeled ‘ugly’, than they were to buy wonky produce that was not labeled as such. And in another mini-study, the researchers found that ‘ugly’ labeled produce was significantly more likely to be picked up than produce described more generously as ‘imperfect’.

There’s a psychological aspect to these surprising findings, which drove the researchers’ work. They argued that vaguer, kinder language used to describe wonky produce (such as ‘imperfect’) leaves more room for suspicion that there are other defects, invisible to the naked eye, that the consumer should be wary of. Meanwhile, labeling a piece of fruit as ‘ugly’ clearly cues the buyer on what’s ‘wrong’ with the produce—leaving less room for speculation on why it looks the way it does, or why it might be cheaper than other fruit and vegetables.

Recommended Reading:
The hype behind carbon farming comes down to earth

“We propose that deliberately emphasizing the unattractiveness of the produce via ‘ugly’ labeling acts as a signal that there is “nothing wrong” with the produce other than its appearance,” the researchers write. Essentially, this tactic works by telling the buyer that if they can navigate past their own biases around attractiveness, there’ll be a perfectly healthy, tasty piece of produce for them to enjoy—most of the time at reduced cost.

That was backed up by some of the other mini-studies in the research, which showed that when retailers called produce ‘ugly’, it improved buyers’ perceptions of quality and taste, which made them more likely to purchase the wonky fruit and vegetables. Pricing also plays a crucial moderating role, the researchers found: when ‘ugly’ produce was heavily discounted at about 60%, it was less likely to be picked up than produce more moderately discounted at about 20%. This seems to trigger the same psychological response: when the price is very low, buyers may grow suspicious that there’s something bad about the produce that they’ve missed.

These findings have immediate real-world relevance. In a survey of over 50 retailers, the researchers found that 46% of respondents didn’t apply any label to wonky fruit and vegetables, while about 33% used the term ‘imperfect’ for their odd-looking produce. Only about 4% directly labeled the maligned fruit and vegetables as ‘ugly’. According to the findings, those choices could have real consequences, by undermining people’s willingness to buy alternative fruit and vegetables.

On the other hand, being a bit more brazen with labelling could save tons of that produce from the landfill and reduce food waste’s huge contribution to greenhouse gas emissions, the researchers say.

It might seem like there are better things to focus our attention on than the precise wording of shop labels. But, as the researchers argue, consumers wield immense power in deciding the fate of food. Nudging buyers towards certain products could tip the scales on food waste, increasing the share of produce that farmers can confidently sell to shops, and boosting the likelihood that what ends up in the grocery store, no matter its appearance, will ultimately become food, not trash.

Making that  small change could have larger ramifications for the planet and its health, the researchers argue. “Our work shows how marketing can be used to shape a ‘better world’ by providing a win-win solution to several stakeholders – from farmers and retailers, to consumers and society at large.”

Mookerjee et. al. “From Waste to Taste: How “Ugly” Labels Can Increase Purchase of Unattractive Produce.” Journal of Marketing. 2021.