By absorbing light in a rainbow of hues, the new windows can do double-duty, churning out electricity day and night
By Prachi Patel
March 4, 2021

Solar panels on rooftops are the leading way to power buildings by capturing sunlight. But researchers have been working steadily on smart power-generating windows that can be integrated into the structural elements of buildings and see-through solar panels for greenhouses.

In a more colorful take, engineers at Rice University have made brightly hued energy-generating glass panels that could make solar power more architecturally appealing. Plus, the panes can also harness artificial light from indoors, so they could produce electricity day and night.

The smart, colorful windows are made of a special material called a conjugated polymer sandwiched between two clear plastic panels. Conjugated polymers are organic molecules that are very versatile, making it easy to change their chemical and physical properties.

Scientists have been exploring conjugated polymers for use in electronics, sensors, and batteries. But they have not been considered for building-integrated photovoltaics technologies, Rice chemical and biomolecular engineers Yilin Li, Rafael Verdusco and their colleagues write in a paper published in Polymer International.

The researchers investigated the conjugated polymer poly[naphthalene-alt-vinylene] (PNV) which absorbs and emits red light. By tweaking its molecular components, the researchers can make it absorb light in a rainbow of hues. 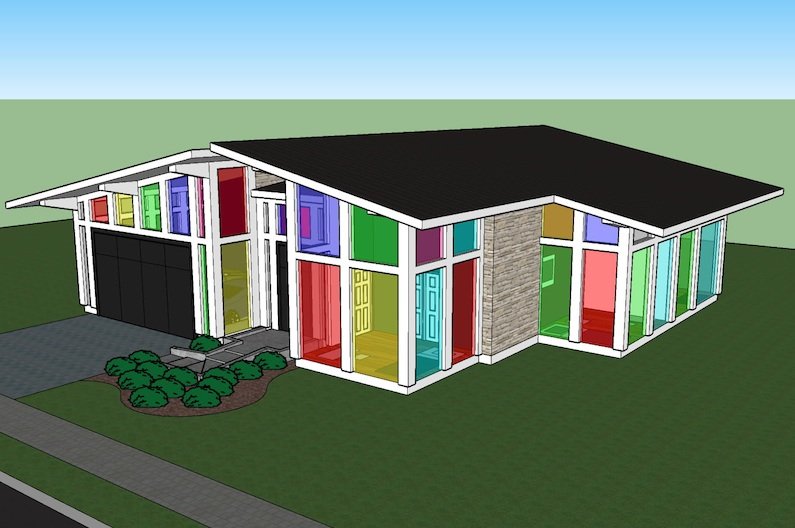 What’s especially useful for the power-generating windows is that PNV acts like a waveguide: it absorbs light coming at it from every angle but then directs it along a particular channel. In the glass panels, the researchers use it to guide light towards the edges of the panels, which are lined with solar cells.

Tests of the colorful windows outdoor in direct sunlight and indoors under LED lighting showed a sunlight-to-electricity conversion efficiency of up to 2.9 percent outside and 3.6 percent under LED light. That is low compared to commercial silicon solar cells, which boast around 20 percent efficiency. But the upside is that the panels could cost much less. And they would be an eye-catching way to generate power from both indoor and outdoor light.