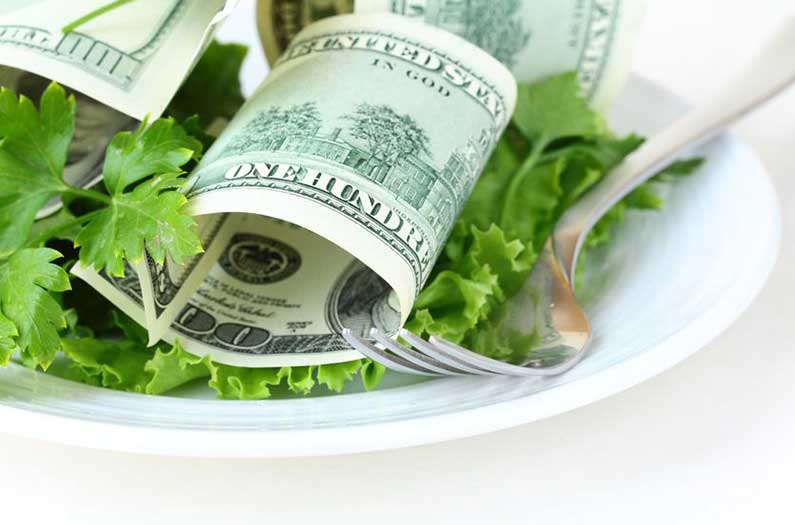 Q: How can we encourage sustainable diets? A: Subsidies.

Instead of punishing people for their food choices, study finds we should subsidize plant-based meals.
By Emma Bryce
March 26, 2021

What compels people to ditch beef for beans and broccoli? A desire to do the right thing for the planet? Social pressure? A new study finds that while both these factors play a role in shaping people’s decisions about what to eat, it’s actually the straightforward appeal of cost savings—in this case, subsidies for more sustainable meals—that has the greatest chance of getting people to eat less meat.

Understanding human psychology is key when it comes to food choices and sustainability, and the researchers on the new study wanted to identify the specific drivers that steer how people eat. That’s especially important in the current context where the idea of a carbon tax is often treated as the default option for getting people to ditch carbon-intensive meat products in favor of less intensive, vegetable-based meals—yet there’s still little real insight into how those taxes might guide behavior, and why.

The study investigates whether, instead of effectively punishing people for their food choices (which is how carbon taxes may be perceived) a more incentivizing approach could have greater success in getting people to switch from meat to veg.

To find out, the researchers carried out three experiments in a typical lunchtime canteen, where participants could choose from one of four set meals that variously incorporated beef, chicken, tofu, or vegetables. Across the experiments, they tested out four approaches that might encourage people towards making greener choices. Two of these were described as behavioral ‘nudges’: a visual ‘traffic light’ system that labeled a meal choice according to how ‘green’ it was, and an approach that leveraged social pressure by flagging some meal options as most favored by other customers. Third, a carbon tax was applied to emissions-heavy foods. And finally, the researchers tested a set-up where plant-based meals were subsidized—with a clear explanation that the subsidy was made possible by the cash generated from the carbon tax on meatier meals.

Through hundreds of consumer choices during the experiments, the researchers determined that a carbon tax was the least effective approach in getting people to make greener choices. Even when it was combined with the labelling techniques, which enabled freedom of choice, collectively these approaches still had only a limited effect on encouraging people to choose sustainable meals.

However, when all four methods were combined along with subsidies on veg-based meals, the researchers observed a sudden uptick in the number of people who chose the more sustainable lunchtime option. That suggests that compared to the celebrated carbon tax, subsidies may actually be the more effective player in getting people to choose greener grub.

An opinion poll also backed up the experimental findings, showing that study participants were generally against the carbon tax, but more willing to bend to the other behavioral  interventions, which created a sense of agency and choice (the labelling ‘nudges’) or provided real incentives (the subsidies) to go green.

This can be understood along psychological lines: “If you have to curtail a behavior, then being additionally punished for it seems like an added insult. Hence why people have a general aversion to taxes in the context of sustainable consumption,” says Magda Osman, an experimental psychologist at Queen Mary University of London in the UK, and lead author on the new study. “But combining taxes with subsidies means that people see where the money generated for taxes is used to benefit reduced prices of goods, which people judge as fairer.”

This emphasized an important feature in the way information was communicated to consumers: it wasn’t enough to simply provide a sustainability subsidy without any context. Instead, to drive greener choices, it was important that consumers were able to make the logical connection between a carbon tax, and a benefit to themselves.

Ideally, this link between carbon tax and subsidies should be explicit, to help consumers recognise the reward in forfeiting meat for veg, Osman says. “The more transparent that [information] is, the better, because people can trace why and where tax and subsidies are working as complements to each other.”

The shift in consumption had measurable effects on emissions, too. The researchers calculated that over the course of their experiments, the dietary change led to a 24% decline in carbon emissions, as more consumers switched out the meat-heavy options for the less carbon-intensive vegetarian meals. They calculated that if all four interventions were used to guide people’s food choices, over he course of a year their experiment could cut the carbon footprint of an individual’s annual lunches by up to 80 kilograms, compared to a scenario where no interventions were used.

These figures align with a growing body of evidence that points to the importance of encouraging certain dietary choices, as a strategy to mitigate climate change. Our efforts to wield a carbon tax for this purpose may be misguided, the study suggests. Instead, there may be greater potential in rewarding people for their sage choices – using the several other tools of persuasion at our disposal. “Using nudges alone doesn’t do much, and a carbon tax puts people off. Combinations of interventions work best,” Osman says.