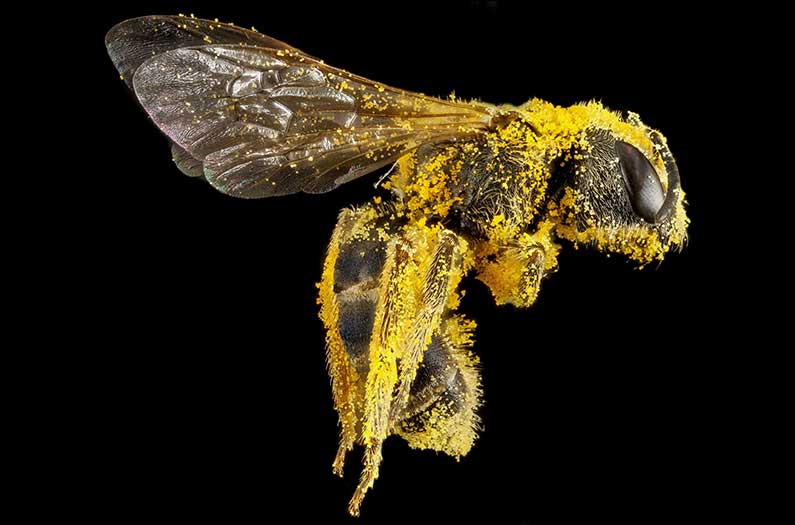 Pollination is the living proof of just how intertwined our food systems are with nature. But what is the value of this essential resource? In a new study, researchers have attempted to answer that question by framing this ecosystem service as a tradable commodity, and for the first time, quantifying its role in driving the international food trade.

Their Science Advances paper reveals that half the world’s traded crops are dependent on pollinators. What’s more, this trade is split starkly along geographic lines, with wealthy nations hugely dependent on insect-fuelled crop production in tropical, developing countries.

Worryingly, these regional cornucopias of pollinator-fuelled food are also where pollinator habitat is currently in decline—something that requires urgent action and attention, if our food systems are to continue into the future, the researchers say. “It would be great if a person drinking a coffee or eating a chocolate in the UK would realize that moment is only possible due to the action of many tiny insects living in tropical regions of the world,” says Luisa Carvalheiro, an ecologist from Federal University of Goias, Brazil, and a coauthor on the new research.

Globally, pollination accounts for 35% of global production by volume. Most fruits and many vegetables—everything from avocados, to bananas, pumpkins, watermelons, lemons, limes, and tomatoes—as well as many ‘luxury’ foods like chocolate, coffee, and almonds, are dependent on insects for their existence.

To translate these benefits within the context of global trade, the international team of researchers on the new study were inspired by the concept of ‘virtual resource flow,’ an idea that’s already used to quantify the amount of water associated with crops traded globally. They used this idea to determine the quantity of globally exported crop production that’s attributable to pollinator’s activities. The researchers looked at 55 pollinator-dependent crops markets between 2001 and 2015, and confined their sample to global croplands that lay within 450 metres of natural vegetation—a distance that insects could feasibly travel from wild habitat to pollinate nearby crops.

They found that over 50% of the crops traded in international markets are dependent on pollinators. At the country level, the amount of imported crops that resulted directly from pollination was as high as 20% in some nations. In certain countries that are primary exporters of crops, pollination accounted for almost 94% of the crop quantity that was traded out. These estimations indicate the huge role insects play not only in stocking up our food systems, but in actually sustaining global food trade, too.

Some striking geographical trends emerged, as well. It turns out that the biggest importers of pollinator-fuelled crops are rich countries like the United States and European nations, while the largest producers of these goods are developing countries in tropical regions, like Brazil. “We show that the richest nations in the world have a large dependence on what is produced by pollinators elsewhere, and obtain such products via international trade,” Carvalheiro explains. This is shaped partly by purchasing power: Richer nations are willing to pay for more expensive pollinated products like fruit and vegetables, which are associated with aspirationally healthy diets, and pricier foods like chocolate and coffee.

That’s an unnerving thought, in light of what else the researchers discovered, which is that countries producing and exporting the largest quantity of pollinator-dependent crops, are also those where the steepest habitat declines are currently underway.

The researchers’ analysis suggests that the market for pollinated crops (driven mainly by rich countries) has led to the expansion of those crop types into wild habitat, which ironically is the habitat needed to support the pollinators that are so crucial to this whole cycle in the first place. So, as farmland expands, its chances of being pollinated will dwindle as wild habitat is consigned increasingly to the fringes, far away.

Unless, of course, we take steps to intervene. This is where the researchers see the real impact of their approach to frame pollinator services economically. By identifying the value of this ecosystem service to global trade, their hope is that countries will be motivated to value it more.

For instance, information about pollinator-driven trade flows could help to identify countries where sustainable production methods should be focused – like precision farming to maximize production and limit farmland expansion, and the establishment of hedgerows and flower borders on farms to bring pollinator habitat directly into crops. Socioeconomic incentives could be made to encourage farmers to protect wild habitat in these ways. Quantifying the dependence of international trade on pollination could also help countries grasp the urgency of bringing down deforestation rates—especially in places like Brazil where wild habitat is so essential to food production, but where rainforest clearance is intensifying.

If, as one option, we internalized the costs of this essential ecosystem preservation into the price of food, it would make tangible our global, shared dependence on biodiversity and habitat conservation, the researchers explain.

In any case, recognizing the interconnectedness between nations when it comes to food will be crucial for more sustainable consumption in the future, Carvalheiro says. “We truly hope this study contributes to the recognition of how influential people’s consumption habits are on what happens in other countries, and that it increases the feeling of shared responsibility.