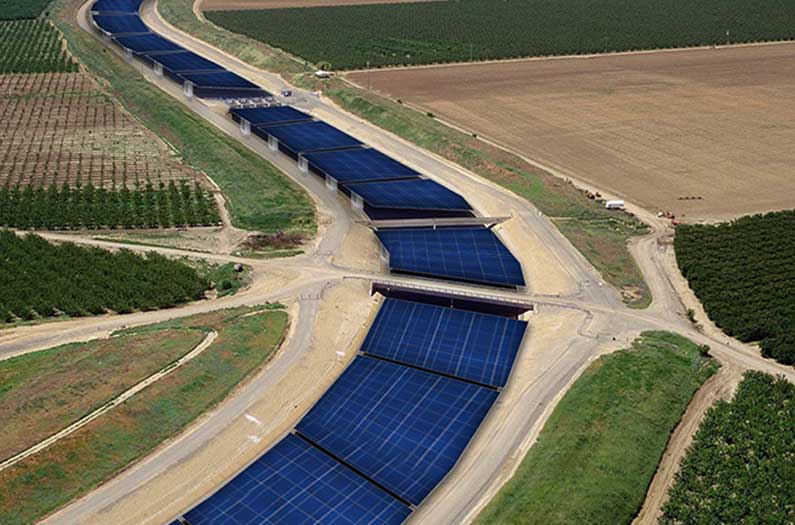 Irrigation canals covered in solar panels are a powerful combination

This one simple trick generates renewable energy, saves billions of gallons of water, and shrinks farmers' carbon footprint—all at the same time.
By Sarah DeWeerdt
March 23, 2021

Shading California’s irrigation canals with solar panels could reduce pollution from diesel irrigation pumps while saving a quarter of a billion cubic meters of water annually in an increasingly drought-prone state, a new study suggests.

Pilot studies in India and small simulations have shown that so-called “solar canals” have lots of potential benefits: Shading the water with solar panels reduces water loss from evaporation and keeps aquatic weeds down. Meanwhile, the water creates a cooler microclimate that increases the efficiency of certain types of solar panels. Combining irrigation and renewable energy installations is also an efficient use of space, reducing the pressure on agricultural and natural landscapes.

The arrangement is “applicable to a wide range of climates and landscapes,” says study team member Roger Bales, a professor of engineering at the University of California in Merced. It’s likely to be especially attractive in dry, sunny regions where there’s competition for land use, he adds.

But until now, it wasn’t clear how the approach would scale. So Bales and his collaborators analyzed the potential for solar canals applied to the world’s largest water conveyance system – California’s 6,350-kilometer network of irrigation canals.

The researchers used three different methods to estimate how much water evaporates from the canal network annually. Based on past studies of the effects of shading, installing solar panels above the canals would save 39,000 cubic meters of water per kilometer every year, the researchers report in Nature Sustainability.

They also performed an economic analysis of three different solar panel arrangements: a standard ground-mounted system, and two over-canal designs (one using steel trusses and the other using suspension cables) that have been trialed in pilot projects in India.

Not surprisingly, ground-mounted panels are cheaper to install than the over-canal designs. But once water conservation, increased electricity production, reduced land costs, and savings on aquatic weed maintenance are taken into account, the cable-mounted solar canal design comes out ahead. The cable-over-canal panels are a 20-50% better investment than conventional ground-mounted solar, the researchers calculated.

“In addition to avoided water costs, the benefits of water conservation from over-canal solar arrays could add resilience to agricultural production,” the researchers write. “For instance, the conserved water could potentially reduce the amount of groundwater pumping and the practice of field fallowing in response to surface-water deficits.”

Many farms in California’s agricultural regions use diesel pumps to bring in irrigation water and pump out brackish runoff that can damage soils. Every megawatt of over-canal solar installed could enable farmers to get rid of 15 to 20 diesel engines, the researchers calculated. In turn, this would reduce particulate matter and nitrogen oxide pollution, as well as carbon emissions.

“Solar covering over canals is an attractive, multi-benefit option for helping make the transition to renewable energy,” says Bales. “It has been demonstrated as feasible, and the next steps are prototype projects plus more-detailed engineering assessments and planning across the thousands of miles of canals in California and the Western U.S.”