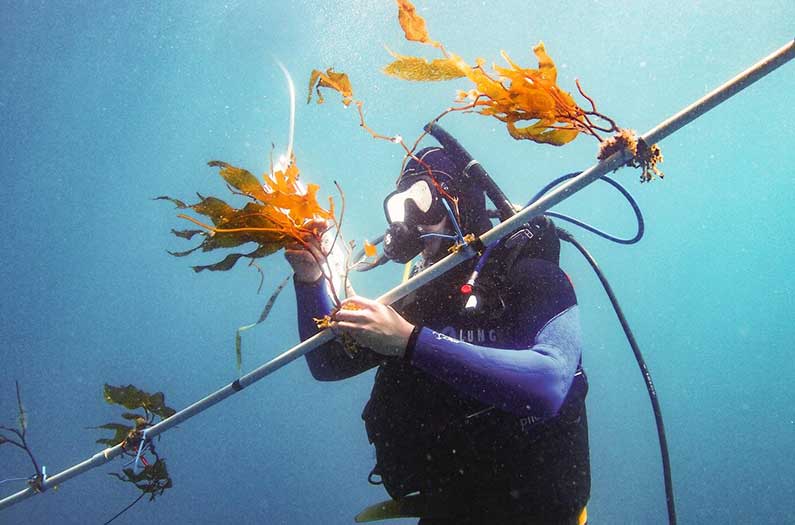 A kelp elevator could speed up seaweed’s route to biofuels

Trees are seen as crucial allies in the fight against climate change. But as the climate crisis becomes more urgent, many eyes are turning to the forests of the sea. Seaweed, it turns out, holds promise as a biofuel crop. To make it cost-competitive with fossil fuels and other biofuels though, it will have to be grown in massive amounts.

Researchers at the University of Southern California might have a solution. They have devised a new technique to boost the growth of kelp, the largest type of seaweed, by four times. Their contraption, called the kelp elevator, raises and lowers kelp to different depths, exposing it to different sunlight and nutrient conditions and speeding up growth.

Seaweed has been used for food, cosmetics, and fertilizers for decades. But its value for biofuel, among other climate-fighting tools, has been recognized more recently. Companies like Loliware and Notpla are using the marine plant to make sustainable, albeit expensive, alternatives to single-use plastic. Recent studies have shown that cows eating seaweed belch less methane and that cultivating seaweed could sequester large amounts of carbon. A startup in Maine called Running Tide Technologies is now trying to bury vast quantities of seaweed at the bottom of the ocean to lock up carbon .

Kelp is one of the fastest-growing plants in nature, growing up to two feet a day. Unlike biofuel crops like corn and sugarcane, it does not need fresh water or fertilizers. And, perhaps its biggest advantage, it does not compete with agricultural land use.

Farming it has challenges, though. Until now, most of it is produced in Asia on small, labor-intensive farms where it is grown on ropes strung in shallow water. Kelp grows best in sunlit waters up to 60 feet deep. But this shallow layer does not have the nutrients found in deeper water in open oceans.

Read more:  Offsets promise to make up for environmental damage in one place by repairing it elsewhere. But do they really work?

The kelp elevator is designed to help get kelp both sunshine and nutrients. It is a structure of fiberglass tubes and stainless-steel cables that anchors juvenile kelp plants. “The good news is the farm system can be assembled from off-the-shelf products without new technology,” said Brian Wilcox, co-founder of California-based Marine BioEnergy, Inc., which designed and built the prototype system reported in the journal Renewable and Sustainable Energy Reviews.

The researchers tested the elevator in the waters of Catalina Island, off the Southern California coast, known for its natural kelp forests. Every day for around 100 days, the elevator brought the kelp closer to the surface during daytime to soak up sunlight, and lowered it to 260 feet at night so it could absorb nitrates and phosphates found in the depths.

The cycled kelp grew four times faster than natural kelp, producing four times as much biomass. This could lead to a way to grow feedstock for affordable biofuel year-round, Wilcox said. The company is currently designing a system for open-ocean kelp farms.