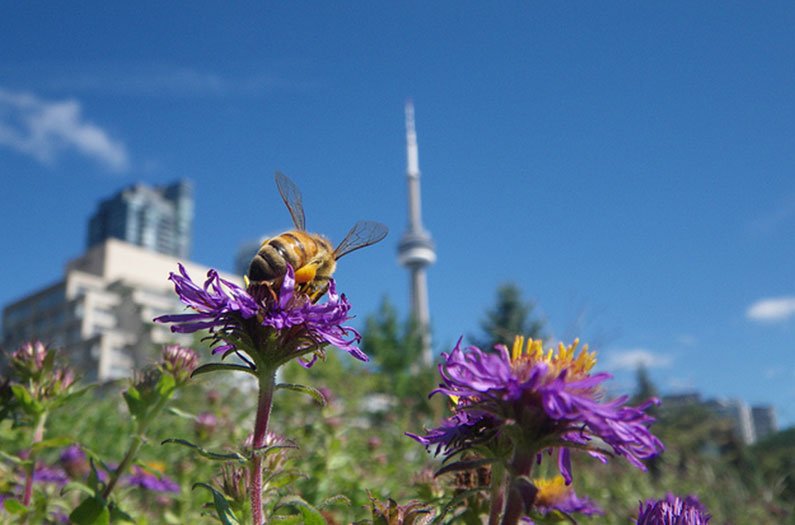 Researchers quantified nectar supply in rural and urban areas and found the scale of production in city gardens overwhelming
By Berly McCoy
March 31, 2021

One major source of widespread pollinator decline is a lack of food and, at first glance, the expansive parking lots and paved city blocks in urban areas may appear to contribute to this scarcity. But until now scientists hadn’t measured urban nectar production on a landscape scale. Pockets of green spaces—particularly gardens—in towns and cities may be providing more sustenance for pollinating insects that previously thought.

New work published in the Journal of Ecology suggests that urban areas in the U.K. are a significant source of nectar and floral diversity for insects. The authors of the study aimed to understand how the nectar supply differs between urban and rural areas and where the nectar sources are concentrated in urban settings. It is the first study to quantify nectar in urban areas on the landscape level.

The standard method for measuring an area’s nectar supply is by using a proxy like flower abundance. To understand the differences in pollinator food supply on different landscapes the researchers did indeed tally plant samples, but they also measured actual nectar production from hundreds of flowering plants in and around 12 towns and cities across the U.K. In each location, flora were sampled in an area that fell into one of three categories: urban, farmland or nature reserve.

Although urban and farmland landscapes had much higher numbers of non-native plants than nature preserves, the team found that the three landscapes produced similar amounts of nectar. Among the urban sources of nectar, which were much more diverse compared to both farmland or nature preserve sources, 85 percent was attributed to gardens. Even paved areas contributed to nectar sources in some instances with flowering shrubs growing through cracks or in parking lots. Within gardens, 83 percent of nectar-producing plants were non-native.

The work underscores the role urban areas can play as nectar hotspots and the value that some non-natives plants may add to support pollinator health.

“This research highlights the importance of gardens in supporting our pollinating insects and how gardeners can have a positive impact through their planting decisions,” says Stephanie Bird, co-author and entomologist at the Royal Horticultural Society, in a press release. “Gardens should not be seen in isolation—instead they are a network of resources offering valuable habitats and provisions when maintained with pollinators in mind.”