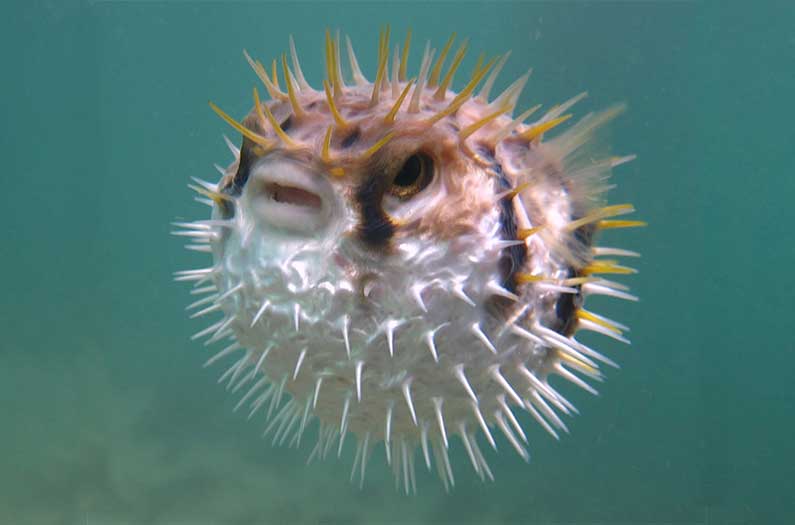 A team of chemical and biological engineers developed a spongy, jello-like material that absorbs clean water and spits it out when warmed by the sun
By Prachi Patel
April 22, 2021

Clean water is already a scant resource in many parts of the world, and this scarcity is slated to worsen with climate change. In a new study, researchers report a simple, sustainable technology to produce potable water from contaminated sources. They have made a sponge-like gel that can purify dirty water using only sunlight. Their inspiration? Puffer fish, which fill themselves with water when they sense danger and release the water to deflate back to their original form.

Over one billion people lack access to safe drinking water around the world, and every year two million people, mostly children, die from diarrheal diseases. By 2025, the World Health Organization predicts that half the world’s people might face water shortages.

“A solution to the water scarcity problem must be environmentally benign and not result in further strain on clean water availability,” Princeton University chemical and biological engineer Rodney Priestley and his colleagues write in the paper.

They developed a spongy jello-like material called a hydrogel. These gels hold water in the spaces created between long entangled strings of polymers. The researchers picked one that is elastic and responds to heat: when it warms up, it turns from a water-loving material to one that repels water, squeezing it out. To this gel, they added a layer of melanin-based molecule that can absorb solar energy and also has the ability to remove heavy metals, and organic dyes through chemical bonding. Finally, a third outermost layer is made of a filter material that holds back impurities and pathogens.

The researchers tested the gel by putting it in cool water from a nearby lake for an hour. The gel swelled up by absorbing clean water, leaving behind pathogens, salts, oils, and any heavy metals. Then they took it out from the water and placed it in a container in direct sunlight. As it warmed up and hit a critical temperature of 34°C, it released the clean water. The team published their work in the journal Advanced Materials.

Solar-based water purification techniques already exist, but they rely on sunlight evaporating water. But since the new purification mechanism does not require water evaporation, which is an energy‐intensive process, the solar water‐purification rate is the highest reported.

“To me, the most exciting thing about this work is it can operate completely off-grid, at both large and small scales,” Priestley said in a press release. “It could also work in the developed world at sites where low-cost, non-powered water purification is needed.”