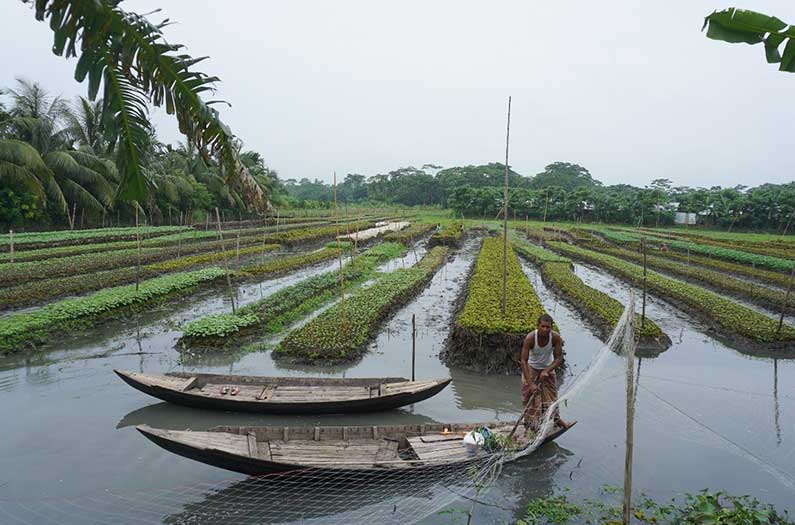 A traditional farming method that has been around for hundreds of years in Bangladesh could help people to adapt to the thoroughly modern threat of climate change, a new study suggests.

Floating gardens—systems created from a substrate of live water hyacinths that are hemmed together into rafts, and planted with crops—have traditionally been a feature in waterlogged environments in Bangladesh and elsewhere in the world. Now, farmers are finding these rafts offer much needed food security in times of flooding.

Despite contributing very little in the way of global emissions, Bangladesh is frequently referred to as ‘ground zero’ for climate change, specifically because of an uptick in the number of extreme flooding events that affect huge swathes of this vulnerable, low-lying country. In fact, one-quarter of Bangladesh now gets flooded every year, which dramatically shrinks agricultural land area – undermining production, and causing nutrient deficiencies, especially in flood-prone rural regions near rivers and the coast. Partly as a consequence of the sheer area of agricultural land being lost to flooding, roughly 25% of Bangladesh’s population is now considered food insecure.

To find out how floating gardens might help buffer people against this risk, the team of researchers—who hailed from Bangladesh, Germany, and the United States—interviewed farmers in a particularly flood-prone region called Barisal District. Here, floating gardens are a common sight, and make use of areas that are waterlogged by rains and flooding. The gardens are also expansive, some reaching almost 100 meters long.

In these ingenious systems, crops feed on the nutrients released by the water hyacinth as it degrades, making the floating mats very fertile, and capable of producing a great diversity of produce—from tomatoes, to cucumbers, spinach, egg plant, potatoes, cabbage, and beans, says Abdullah Al-Maruf, associate professor in the department of Geography & Environmental Studies, Rajshahi University, Bangladesh who researches disaster resilience, and is an author on the study.

What the Barisal District farmers told Al-Maruf and his colleagues was that there was a strong association between greater food security, and periods of the year when floating gardens were the main focus of agricultural production. During the first half of the year, many regional farmers focus on rice cultivation, which aligns with a period of food shortage and reduced income. However, during the rainy season between June and December, when farmers return to tend their floating gardens, food shortages significantly declined.

This abundance is partly due to the greater diversity of food that’s grown on floating gardens. But farmers also reported that they generate significantly more income from their agricultural rafts, than from cultivating rice, some revealing that they earned fourfold more during the rainy season thanks to the demand for float-grown vegetables. That gives them greater purchasing power to buy more food. What’s more, the microhabitat created by the foundational water hyacinth brings another benefit: fish congregate around the floating rafts, enabling farmers to incorporate more protein into their diets during this farming period.

Overall, farmers who engaged in floating food production reported more stable incomes and sufficient food during the farming period. All of them ate fish daily, and red meat up to three times a month—suggesting greater financial freedom—and also reported a great variety of vegetables in their diets. That’s in contrast to the rice cultivation season, when farmers reported a comparative lack of vegetables and meat.

This paints a general picture of more food and greater nutritional diversity during the rainy season, thanks to floating farms. It also reveals the future promise of floating farms in Bangladesh’s unpredictable climatic landscape. “Floating gardens can be a sustainable farming method and income strategy for rural households, where waterlogging remains for several months a year under the context of climate change,” says Al-Maruf.

Reverting to raft-farming as a means of food production means that food security won’t be limited by reductions in land – and these gardens could also take some of the pressure off the declining land area that does remain for farming. “The study suggests areas that cannot be [conventionally] cultivated are made usable,” Al-Maruf says. Floating gardens could also empower the rural farmers who are most vulnerable to flooding, by turning the global threat of climate change to their advantage.

What’s more, a hyacinth mat can survive for 10 years, nourishing the vegetables it grows—after which, it can be repurposed as fertilizer for crops on land, in a neat, closed-loop cycle. One caveat to this, the researchers discovered, is that farmers in Barisal District currently use pesticides on the rafts, which they suggest should be replaced with greener substitutes, if this farming method is to be adopted as a truly sustainable alternative in the future.

And Al-Maruf does hope floating farms spread more widely in Bangladesh. The country’s population is growing by more than 2 million people each year, who all need food. Meanwhile, in an increasingly waterlogged country, the prospects for conventional agriculture are declining, which makes this long standing agricultural art increasingly relevant. “I strongly believe floating gardening can be an option for other parts of the country, to manage flooded agricultural land,” says Al-Maruf.