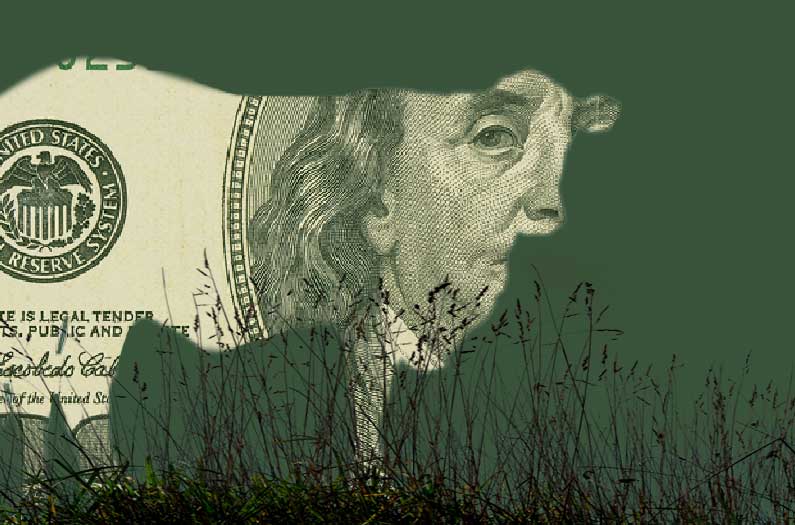 Drawing on a vast dataset called OpenSecrets, researchers found that the amount that companies spent on lobbying against climate action generally tracked with the intensity of their emissions
By Emma Bryce
April 16, 2021

Animal agriculture now contributes a total 15% of global greenhouse gas emissions, and accounts for 23% of anthropogenic warming on our planet. But who holds responsibility for this large scale damage? Farmers? The consumers they feed? A new study tackles this question by examining the rather more shadowy figures in this equation: global meat and dairy companies.

In the new study, researchers examine the role of the world’s biggest meat and dairy producers in shaping the industry’s broader climate impact. What they unveil is a general culture of dismissiveness over livestock emissions—and even more strikingly, the direct role that many of these influential companies play in trying to undermine climate science.

The researchers started by selecting 35 major players in the global meat and dairy industry—which they chose by volume of production—and which ranged from Danone and Nestlé in Europe, to JBS Foods in Brazil, to Tyson, Cargill and Hormel in the United States.

They took a three-pronged approach to explore how these companies are positioned on climate change. First, they examined the emissions reporting and public climate commitments shared by each. Second, they explored how the emissions of all 35 companies factored into the broader climate commitments of the countries where each is headquartered. Finally, the researchers took a closer, investigative look at whether companies wield political influence on climate change—focusing on the American context, as that’s where the researchers are based, and where they had access to the documents that could reveal this information.

For starters, the broad sweep of global players had highly variable approaches to emissions reporting and climate pledges, the researchers discovered. Some companies didn’t report their emissions at all. Others counted only some types of emissions and not others—for example, looking at emissions from energy use, but excluding those that result from land-use change. Notably, several companies made commitments to mitigate carbon dioxide emissions from their industry, but failed to mention methane in their targets—the most impactful source of emissions from animal agriculture.

Some companies are taking notable steps towards climate mitigation. But of the 35 companies surveyed, only four have committed to net-zero emissions by 2050, the researchers point out.

But probably the most striking evidence of the climate influence of meat and dairy companies emerged from the researchers’ investigative foray into lobbying by the 10 meat and dairy companies that are based in the United States. To get these insights they relied on a vast dataset called OpenSecrets, produced by a non-partisan US nonprofit, which records thousands of accounts of lobbying and spending for political influence, by various organizations across the US.

The researchers found that all 10 US companies were directly involved in undermining climate policies that were perceived to hurt their business prospects. Three in particular (Tyson, Cargill, and Smithfield) have contributed financially to organizations that actively try to minimize the connection between animal agriculture and climate change. Out of the 10 companies, eight have directly lobbied Congress and the Environmental Protection Agency on environment and climate related issues. Meanwhile nine have spent money directly on political campaigns—totaling $26 million since 2000. One striking example of this was Hormel Foods, a pork-producing company that provided the largest contribution to the political campaign of former Congressman Rep. Gutknecht, who had a record of questioning the legitimacy of climate change.

Collectively, America’s 10 most powerful meat and dairy companies have spent $109 million on lobbying activities since 2000. That might not sound like a lot when compared with the more than $100 million that other industries, like Big Oil, contribute to lobbying in the US each year. But when that amount is taken as a share of a company’s revenue, the intent and influence of this money becomes clearer. For example, of the 10 companies, Tyson has spent the most on lobbying—totaling $25 million since 2000. As a share of the company’s revenue, that amount is double what the oil company, Exxon, has spent on political campaigns—presumably indicating how effective Tyson deems its lobbying to be.

Interestingly, the researchers also found that the amount that companies spent generally tracked with the intensity of their emissions: Tyson is both the biggest emitter of the 10 US companies, and the most politically influential, according to the researchers’ analysis.

The researchers point out that despite their keen focus on the United States, it’s not the only place where lobbying by meat and dairy companies is commonplace. This also occurs in countries like Denmark and New Zealand, two nations where—perhaps not incidentally—animal agriculture contributes a significant amount to the national emissions budget.

Ultimately, the study draws a question mark around the ongoing issue of who should take responsibility for the planetary impact of food production. Farmers and their production methods are often framed as the problem that most needs to be solved. Likewise, shifting consumer appetites is often pitched as the best route to bringing down agricultural emissions. Changes in those domains undoubtedly do have a role to play in mitigating climate change.

But in light of their sheer influence, perhaps it makes more sense to start off by examining the practices of companies that are not only obscuring and reframing their own climate impact, but purposefully undermining efforts to mitigate climate change.

If we ignore these background dealings, we risk overlooking one of the biggest ongoing drivers of emissions on our planet. “Countries and civil society should not ignore the physical as well as social impacts of large meat and dairy companies if we hope to effectively limit global warming,” the researchers write.