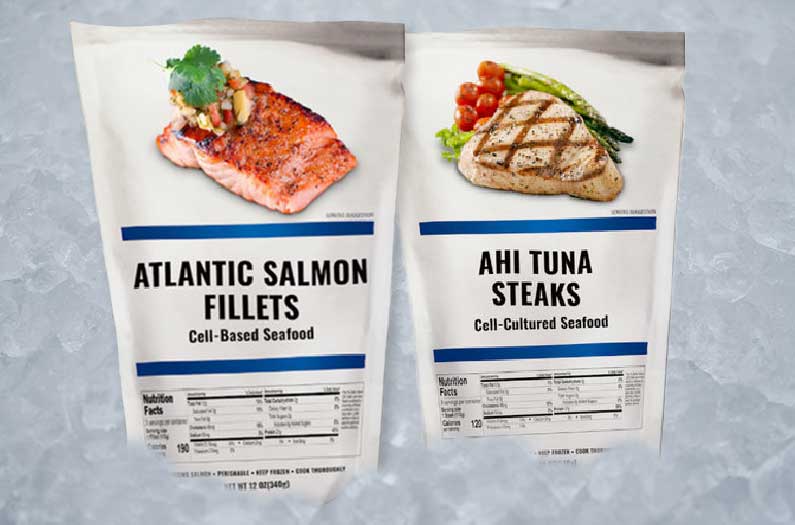 Replacing wild-caught fish with lab-grown seafood is more complex than it may at first appear
By Emma Bryce
April 2, 2021

We’ve heard plenty about cultured beef burgers and lab-grown chicken breasts in the last few years. But what about cell-based seafood? Proponents of this emerging industry argue that diverting human appetites from wild-caught fish, to seafood grown in a lab, could be one way to ease pressure on global fisheries and replenish fish stocks. That’s the premise on which this innovative technology is built.

However, in the first in-depth assessment of this idea, researchers on a new study find that the links between lab-grown seafood and marine conservation may be more tenuous than they first appear. Specifically, getting consumers to make the switch to lab-grown fish, and ensuring that it translates to reduced fishing of threatened species, emerge as the biggest future challenges. “The pathway for cell-based seafood to have a benefit to fisheries is long and narrow,” says Benjamin Halpern, a marine biologist at the University of California, Santa Barbara, and lead author on the study. Yet, there may still be some reasons to remain optimistic about this innovative new food tech, the researchers say.

The production of cell-based seafood requires the extraction of muscle cells from fish, molluscs, or crustaceans, followed by their propagation in ideal conditions inside a bioreactor. Cells are typically grown on an edible scaffold that’s designed to give them the structure and texture of wild-caught meat. The ideal result is that cultured seafood becomes indistinguishable from wild-caught fish.

To find out if switching to cultured seafood would be a better bet for the planet, the team of international, cross-disciplinary researchers mapped out nine key steps they believe this industry would have to achieve. At each stage, they delved into the potential and the challenges of cell-based seafood.

The steps included developing the new product, getting it to market, making it cost-competitive, and getting consumers to willingly substitute it for wild-caught fish. Consumption of cultured seafood would then have to be significant enough to lead to a decline in fishing effort and the rebounding of threatened stocks.

There are now a handful of companies that have succeeded in developing cell-based salmon, shrimp, yellowtail, and carp—with crab and lobster on the way. The most advanced are still at the taste-testing stage and haven’t yet entered the market. But the researchers’ analysis revealed several uncertainties about the future of these cell-based foods. One of the biggest caveats is a notoriously fickle consumer market. Eighty percent of new food products that hit the shelves are rejected by consumers, and end up failing. Foods that replace traditional meat face the added hurdle of having to demonstrate their likeness to the real thing: consumers really have to be convinced of the new food’s superiority to make the switch from the old product they’ve always consumed. That’s a hard sell. The initial high cost of cell-based seafoods—which currently cost a lot more to produce than wild or farmed fish—is also likely to throw consumer preferences off course.

The fishing industry is largely guided by consumer markets, so reducing fishing pressure on our oceans depends heavily on consumers’ willingness to switch from wild to lab-based seafood. The researchers’ analysis reveals the risks of relying on this unpredictable consumer base—and therefore the slim likelihood that the appetite for cell-based seafood would really catch on fast or significantly enough to reduce divert pressure away from wild fisheries. “I think the hardest hurdle will be getting people to change their consumption behavior – not just to start eating this new product that they are unfamiliar with, but also to stop eating wild-caught fish,” says Halpern. “Such switches in food consumption are really rare.”

The researchers underscored many other caveats and uncertainties, but a few, in particular, stood out. Crucially, the target of current cell-based seafood innovations aren’t species that are particularly threatened worldwide. For instance, tuna and salmon fisheries are relatively well-managed. Meanwhile, forage species like anchovies face greater threats from overfishing, but aren’t being explored in current cell-based developments because the financial returns wouldn’t be high enough to justify the cost. This calls into question the real conservation impact that cell-based technologies could have, if they’re not able to replace the most threatened fish.

Another point is that not all fisheries are struggling because of human consumption, but rather due to other significant factors like habitat destruction and climate change. The potential of cell-based seafood to make a difference in those scenarios is limited. The researchers also point out that even if a significant appetite developed for cell-based seafoods, there are also many fisheries around the world that are relatively insulated from the vagaries of consumer markets by measures like subsidies. That mean shifts in human appetites won’t necessarily steer substantial changes in crucial fisheries.

And finally, there’s the simple fact that there are thousands of fish species that humans currently consume—and that sheer diversity of choice is part of what makes seafood so appealing to us. Yet culturing seafood has very limited production capacity to replace them all. Just by virtue of the scale of the challenge, that limits the scope of its conservation benefits, too.

Overall, the researchers argue that celebrating cell-based seafood production as a fundamental ‘solution’ to global overfishing is simplistic: it probably won’t have industry-wide conservation benefits, because its capacity just isn’t that big. What’s more it will take a while to grow, pass regulations in multiple countries, and find widespread appeal in international markets.

However, that doesn’t mean it should be dismissed out of hand.

There are unique characteristics of lab-cultured seafood that, if marketed smartly, could make it appealing to some consumers, such as the reduced threat of mercury pollution, and microplastics in fish flesh. The researchers also think that, crucially, it could be targeted to replace fish production from especially unsustainable forms of aquaculture, like land-based shrimp farms that frequently result in the mangrove clearances, and devastating soil and water pollution.

But to set in motion global fisheries recovery, probably our best bet is to strengthen the tools we already have. “I am very skeptical that cell-based seafood has much chance of helping address overfishing,” Halpern says. “There are much better, very well-studied ways to reduce overfishing, most notably fisheries management and marine protected areas.” For now, while we wait to see how new food technologies evolve, old-school approaches may be where the greatest potential lies.

Image: The photograph shows an experimental packaging prototype tested in a research study on how to market cell-based seafood. Credit: Hallman et. al. “An empirical assessment of common or usual names to label cell-based seafood products.” Journal of Food Science. 2021.