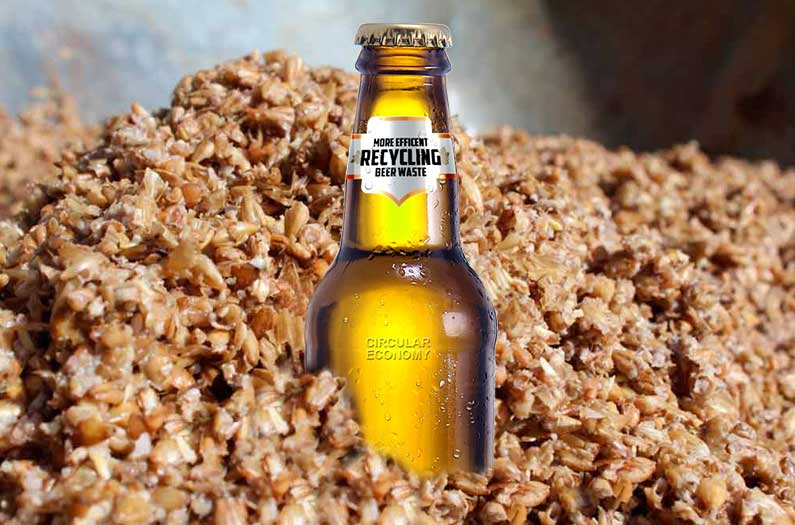 By extracting the proteins and fibers in spent grain, researchers show that we can drink our beer and eat it too
By Prachi Patel
April 15, 2021

Brewing beer produces a large amount of leftover grain. Some craft breweries and home brewers turn this spent grain into bread, crackers and dog biscuits. But most of the tons of spent grain produced worldwide becomes either cattle feed or ends up in landfills.

Food scientists at Virginia Polytechnic and State University have now found an efficient way to turn this waste into treasure. By extracting the protein and fiber from beer waste, they have made biofuels and new types of protein sources for food. They reported their work at the American Chemical Society spring meeting last week.

About 85 percent of the byproducts from the beer brewing process are spent grains. This wet mash left behind after the sugars have been wrung out from beer brewing grains like barley, wheat, and rye contains about 70 percent fiber and 14–­30 percent protein. Breweries around the world produce around 40 million tonnes of this byproduct every year. It could be a cheap source of nutrition, but the high fiber content makes it hard for humans to digest.

Haibo Huang and Yanhong He have devised a novel wet milling process to extract the protein from this waste. Others have in the past developed ways to turn beer waste into renewable fuels, but the new technique is more efficient because the researchers do not have to dry the grain first.

The researchers got spent brewing grains from local breweries. They start by soaking it in water containing a commercially available enzyme alcalase. This breaks down the grains so that its components are easier to separate. Once the researchers mill the grain, they sieve it, which separates the concentrated liquid protein and a fiber-rich material.

The concentrate, which contains 83 percent of the protein in the spent grains, could be used as a low-cost, sustainable alternative protein in processed food products. One California-based startup, ReGrained, has come up with a patented “thermo-mechanical” process to convert this byproduct into food-grade protein for nutrition bars and snacks.

The leftover fiber, meanwhile, could be used as a raw material for biofuels. The researchers treat the fiber with sulfuric acid to break it down into sugars. They feed these sugars to a new species of bacteria that they recently found in a spring at Yellowstone National Park. The bacteria convert the sugars to a compound that is used to make rubbers and fuel.

According to the press release, the team is now trying to scale up the technology up for industrial use. They are also searching for less expensive enzymes since alcalase can be expensive.