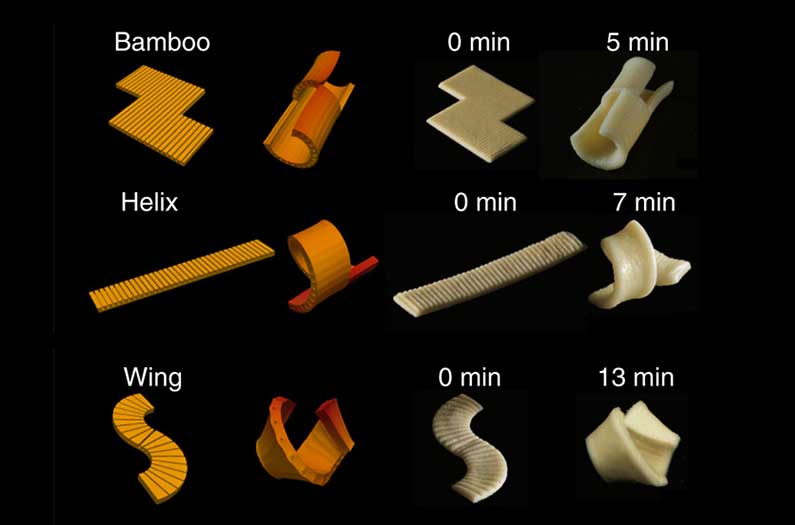 From conch-shaped pasta shells and the jaunty bow ties of farfalle, pasta in its various forms has become a culinary staple in millions of homes. But its creative 3D shapes also make this foodstuff one of the more inefficient to package and transport: air-filled bags of dried pasta use up large amounts of plastic, and occupy unnecessary amounts of space during storage and transport, leading to more fuel use and higher emissions.

Now researchers think they have a solution that could dramatically slim down on pasta packaging, and cut back on transportation costs: shape-shifting pasta. Their innovation enables pasta to be packed economically into dried flat sheets, but then spring into a variety of 3D shapes when it’s added to boiling water. The discovery could make pasta more sustainable, without affecting its consumer appeal.

The researchers accomplished this feat by carefully stamping pasta dough with precise patterns that affect its movement and shape when exposed to boiling water—a technique that they describe in their recent Science Advances study. This concept comes down to the physics of how water interacts with pasta. For instance, stamping grooves into one side of a sheet of pasta changes the way that water interacts with that surface: the tiny valleys and ridges formed by the grooves increase the surface area and therefore increase the amount of time it takes for the water to saturate the pasta. Meanwhile, the smooth side absorbs water more quickly.

“This effectively makes the grooved side expand less than the smooth side”—and this difference in saturation causes the pasta to curve into a funnel-like shape, with the grooved part on the inside, explains Teng Zhang, a researcher in the Syracuse Biomaterials Institute at Syracuse University, and one of the authors on the new study. “By designing the location and geometry of the groove, we can achieve various 3D shapes after morphing,” he says.

To get to this point, Zhang and colleagues first carried out extensive computer modeling studies that helped them to simulate the pasta’s variable responses to the pattern and placement of grooves, to determine how these patterns could be manipulated to create widely loved pasta shapes. For example, the simulations showed that stamping parallel straight lines on one side of a substrate led to a helix-like model (like we see in fusilli) while stamping lines in a radiating pattern across a surface created a conical form that’s the basis of many different pasta shapes.

The researchers also used groove stamping simulations to produce more elaborate creations—such as a substrate that could blossom from a flat state into a fully-fledged 3D pasta flower. These models suggest that the huge potential variability of line arrangements—including the width of the groove, its depth, and distance from other lines—could be manipulated to create endless options for pasta shapes.

The research team was then also able to translate their detailed simulations into the real world. They showed that simple groove patterns, applied to differently-shaped pieces of real pasta, could transform the flat glutinous substrate into a variety of shapes that came very close to popular pasta types—from fusilli to rigatoni—when cooked.

Of course, there’s more to this all than the novelty value of watching pasta shapes unfurl into 3D as you cook. “We believe the flat-packed morphable pasta would cut back on the packaging required while saving space in shipping and storage,” Zhang says. In fact his team estimated that compared to traditional pasta, their reimagined flat pasta product could save up to 86% of space during shipping and storage. This could “partially alleviate pollution by reducing the amount of air shipped during food transportation,” the researchers write.

Additionally, flat pasta could reduce the required packaging space by 60%, and limit the use of plastic—or potentially even make it easier to switch to more sustainable recyclable cardboard packaging, which is better suited to flat-packed food.

“We also envisioned that flat-packed pasta may lower the carbon footprint of cooking,” says Zhang, explaining that in Italy alone, about 1% of the country’s greenhouse gas emissions arise from cooking pasta. But interestingly, flat pasta seems to cook more quickly than traditionally shaped pasta, so he believes their invention could bring that footprint down.

Next, the researchers are working on making their technique more accessible to people like chefs, by creating a design platform that others can use to create the pasta stamps. Ultimately, the impact of this invention lies in its simplicity: a few strategically placed lines on pasta dough could have tangible implications for food sustainability further down the line. “We are excited to see its potential impact on our daily life, and the sustainability of society as a whole,” Zhang says.