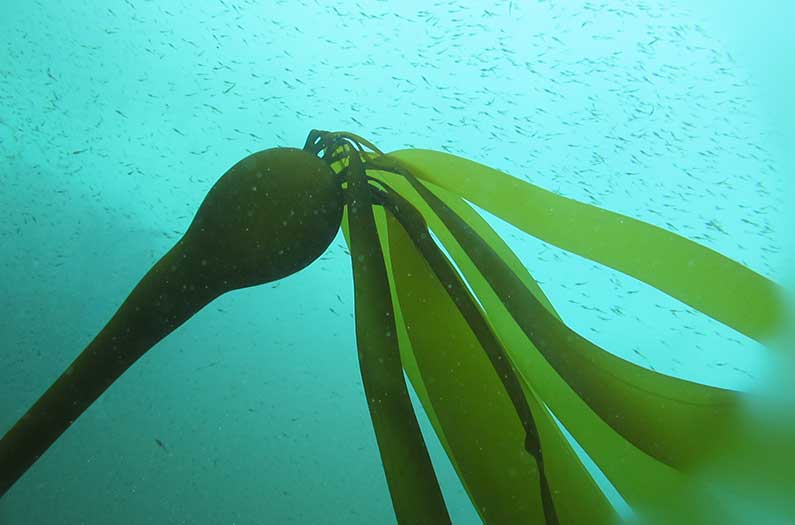 A research team calculated how strategically-planted beds of seaweed could help to clean up one of the world’s most polluted coastal environments, the Gulf of Mexico
By Emma Bryce
May 7, 2021

The devastating consequences of agricultural nutrient pollution in marine ecosystems may have an agricultural solution: seaweed farming.

A new study shows that strategically-planted beds of seaweed could help to clean up one of the world’s most polluted coastal environments, the Gulf of Mexico. What’s more, the increasing value of these large algae in multiple commercial products could make seaweed farming highly marketable – a double win for the environment and the economy.

The new study is the first to emerge from an interdisciplinary group of researchers called the Seaweed Working Group, who are trying to map the potential benefits of seaweed aquaculture to society – including its value as a clean-up tool.

Their paper reveals that nutrient pollution is increasing worldwide; previous research has shown that in the decade between 2003 and 2013 alone, nutrient pollution rose globally by 65%. Along with this uptick, the situation in the Gulf of Mexico has grown worse: here, the influx of phosphorus and nitrogen waste, mainly via run-off from farms, has fuelled repeated surges in the growth of microalgae, which die rapidly en masse, and in the process, suck up the oxygen in the surrounding environment. This causes hypoxic dead zones where very little marine life can survive. In the Gulf of Mexico, such events threaten the region’s $2 trillion contribution to the economy, partly by undermining Gulf fisheries, which provide about 14% of seafood in the United States.

This is where macroalgae – a.k.a. seaweed – could come to the rescue. Fronds of seaweed are hungry for nutrients, and can lock away large amounts of nitrogen and phosphorus. But because they have longer lifecycles and can be strategically harvested, these algae don’t rapidly die and cause upheaval in the local ecosystem. “Seaweed aquaculture is one of the few tools that we know of to remove excess nutrients once they’ve entered coastal environments,” says Phoebe Racine, a researcher in aquaculture sustainability at the University of California, Santa Barbara Bren School of Environmental Science and Management, and lead author on the new research. So what if we could farm seaweed, proactively, to create a buffer against environmental destruction?

Curious about the answer to that question, the researchers first wanted to find out whether seaweed cultivation in the Gulf would even be feasible. They combined datasets on the human uses and oceanographic obstacles to farming in the Gulf – such as vessel routes and oil rigs – and this revealed a surprisingly large area of ocean, roughly 63,000 square kilometers in size, where seaweed cultivation could legitimately take place. That’s equivalent to about 9% of the Gulf of Mexico’s exclusive economic zone (EEZ.)

Then, they looked at data on nutrient flows, and examined the potential of three types of commercially-cultivated seaweed species, to soak it up – Euchemia, another called graceful red weed, and Sargassum. Their analysis showed that farming these three varieties in only a small part of this area – amounting to less than 2% of the EEZ, overall – would be enough to cut down phosphorus and nitrogen pollution in the Gulf by 20%, in the next five years. That figure aligns with regional pollution targets. “Cultivating seaweed in less than 2% of the U.S. Gulf of Mexico could potentially reach U.S. pollution reduction goals that for decades have been difficult to achieve,” says Racine.

No only would seaweed farming be possible in this region – but according to the researchers’ calculations, it could also be profitable. They make the case that seaweed could make a powerful contribution to water quality trading schemes, wherein companies buy credits in environmental initiatives that are designed to offset their water-polluting impacts. Seaweed aquaculture could fetch between $2 and $70 per kilogram of nitrogen removed from the water, the researchers calculated, which are competitive figures in the market.

Seaweed farming could also benefit in more directly commercial ways, as it attracts growing interest from various industries. Currently, cultivating seaweed is uncommon outside of Asia, but that’s changing, with global production expected to double in the next ten years, as industries catch on to the value of macroalgae for food, pharmaceuticals, and – coming full circle – for producing nutrient-rich fertilizer for farms. Where seaweed is exposed to particularly high amounts of pollution, it may not be suitable for human consumption. But it still has a wealth of other commercial uses – in everything from textile production, to bioplastics, biofuels, and even building materials.

Beyond all these benefits, there are the less obvious ecological pluses, too. Seaweeds oxygenate the water column – good insurance against dead zones in the Gulf – and they could provide new habitat for marine species.

Even so, why go to all the trouble of planting seaweed out in the wild ocean? After all, nutrient waste is a problem that arises on land. But that’s part of its challenge: this form of pollution is notoriously difficult to tackle at source, because it’s frequently so disparate. This is true in agricultural contexts especially, where much of it is dispersed into soil, then carried by rainfall and run-off into the sea – making it difficult to pinpoint and intercept the pollution. What’s more, the existing efforts to tackle nutrient pollution are costly: the United States spends an estimated $27 billion on treating wastewater each year.

So there’s some consensus that to really tackle this challenge, certain solutions need to occur at the end-points of pollution. This is where seaweeds could come in, because they can intercept nitrogen and phosphorus before they cause further destruction in the sea.

The study also comes at a time when the idea seems to be catching the attention of government authorities. In 2020 the US government signed an executive order that designated the federal waters of the Gulf of Mexico as a region that will contain ‘Aquaculture Opportunity Areas’ in the future – which could include seaweed farms. What’s more, the US Department of Energy has devoted about $22 million to developing seaweed farming for biofuel production. “I feel confident that growing consumer demand, alongside efforts to more effectively regulate aquaculture, will open the door to seaweed farming in the Gulf of Mexico,” Racine says.

The Seaweed Working Group plans to expand this work. “Our next step is to investigate where in the U.S. this would be effective,” says Racine. “We’ve developed a map of nutrient pollution hotspots and are modeling seaweed aquaculture’s uptake of anthropogenic nutrients, to get a finer scale picture of where farms specifically could have the most uptake.”

A lot still needs to happen before seaweed farms can lay down roots off the coast of the US. But one day, this nature-based solution might help to clean up some of the mess we’ve made – and contribute to marine ecosystems and the economy at the same time.