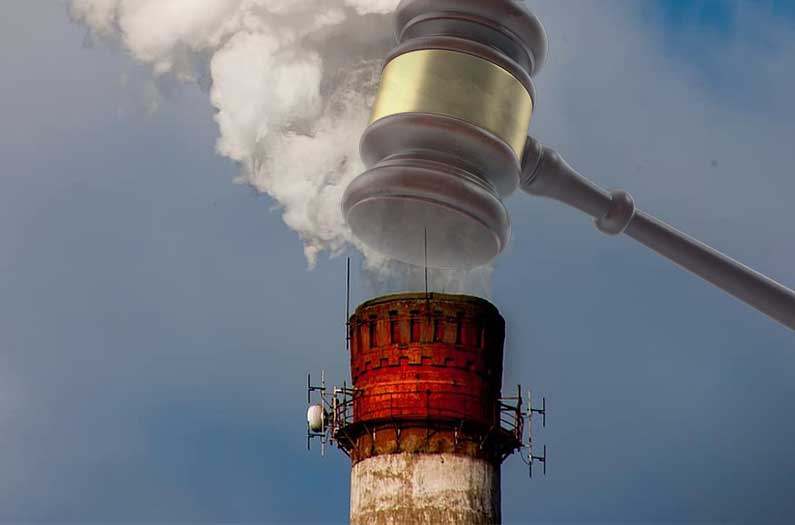 Better use of the latest research could aid plaintiffs seeking emissions cuts or damages in court
By Sarah DeWeerdt
June 29, 2021

More than 1,500 climate-related lawsuits have been filed worldwide. Plaintiffs have sought to recoup damages from emitters for losses due to current or future climate change, and tried to force governments and corporations to reduce greenhouse gas emissions or beef up climate adaptation measures.

So far, only a few lawsuits have gained traction in the courts. But in many more cases, the science backing plaintiffs’ claims already exists, according to a new study – it just hasn’t made its way into the legal system.

“In lawsuits seeking compensation for climate damages, courts rely on scientific evidence to evaluate the causal link between the defendant’s behavior and the plaintiff’s losses,” says study team member Rupert Stuart-Smith, a graduate student at the University of Oxford in the U.K. Many lawsuits have failed courts’ causation tests, he says. But “some of these obstacles to causation could be overcome if plaintiffs made better use of climate science evidence.”

Stuart-Smith and his colleagues searched through a legal database to identify 73 climate lawsuits filed in 14 jurisdictions across 6 continents. (The majority of the suits, 45, were in United States courts.) They looked specifically at suits that claimed an emitter’s actions caused climate-related losses in particular locations because these are the kinds of suits for which evidence from a field known as climate attribution science would be relevant.

The researchers examined supporting documentation submitted by plaintiffs, as well as how courts have responded to the scientific evidence presented. “We find that the evidence submitted and referenced in these cases lags considerably behind the state of the art in climate science, impeding causation claims,” the researchers write in Nature Climate Change.

Of the lawsuits examined, 54 cases dealt with extreme weather events, and 38 concerned sea level rise. Climate attribution science methods can quantify the contribution of climate change to extreme events, changes in average temperature or precipitation, and trends in glacier size and sea levels, so in theory it should be possible to make a pretty good case for cause-and-effect relationships.

But most suits didn’t make full use of the scientific evidence available. Some provided no evidence of causality, and others lacked quantitative estimates of how climate change contributed to the events at issue. Plaintiffs tend to lean heavily on reports from the Intergovernmental Panel on Climate Change (IPCC), but these usually concern regional or global trends, and aren’t specific enough to establish causality for local damages.

Climate change isn’t the only thing responsible for extreme weather or sea level rise, so lawsuits need to take care to untangle climate change from other factors that contribute, and make sure that the evidence presented is relevant to the local situation, the researchers say.

Another problem is that greenhouse gases all mix together in the atmosphere, and many entities have contributed to emissions over time, making it a challenge to allocate blame to particular defendants. However, some recent studies have attributed fractions of climate change to particular countries, and it should be possible to use the same methodology to attribute degrees of climate change to individual corporations.

“While we did see improvements in the evidence provided overall in recent cases, there is still some way to go,” Stuart-Smith says. “Attribution science can evaluate the strength of causal links between emissions of greenhouse gases and the specific losses suffered by plaintiffs, and this still hasn’t been widely used in the cases we reviewed.”

Better communication between scientists and lawyers could help improve the situation, the researchers argue. Lawyers need to know more about what scientific evidence exists to support attributing particular losses to climate change. And scientists need to understand more about what evidence is necessary to establish causality in the courts.

“Ultimately, it doesn’t seem far-fetched anymore to suggest that – if supported by the right scientific evidence – future cases will force companies to pay compensation to communities impacted by climate change,” Stuart-Smith says.