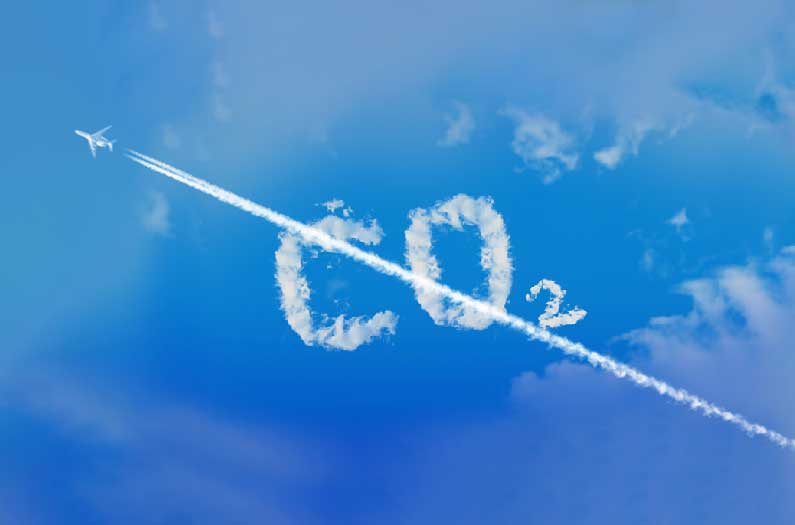 Jet fuels made from renewable and waste sources could eliminate contrail clouds, which are worse for the climate than an airplane's carbon dioxide emissions.
By Prachi Patel
June 24, 2021

Flying is one of the most carbon-intensive activities a person can indulge in. The aviation industry is trying to change that, and one option being considered to reduce flying’s carbon emissions is to use clean fuels made from renewable and waste sources instead of fossil fuels. Yet in 2019, sustainable aviation fuels (SAFs) accounted for a tiny 0.01 percent of global aviation fuel.

A new study now makes the case for a concerted look at SAFs. These fuels are already capable of cutting lifecycle emissions by up to 80 percent compared with conventional jet fuels.

The new paper published in the Nature journal Communications Earth & Environment shows that burning SAFs further reduces the climate warming impact of flying because it produces less soot and ice particles when cruising, resulting in far fewer contrails, the cloud-like tracks airplanes leave in the air.

Recent studies have shown that contrails contribute even more to climate warming than the carbon dioxide emissions from aircraft. Jet engines spew carbon dioxide, water vapor, and soot particles when they burn conventional fuels. The water vapor condenses on the soot and freezes in the cold high-altitude temperatures to form ice particles that make up contrail clouds.

Contrails remain in the atmosphere for hours, trapping heat from the Earth’s surface, and attracting sunlight, which makes the heating worse.

Researchers from NASA and the German Aerospace Center wanted to test how different fuels could impact an airplane’s contrails. They flew an Airbus A320 using five different types of fuels. Two were traditional jet fuels, and the other three were mixes of jet fuel with synthetic or bio-based alternative fuels. The airplane flew at a constant speed and altitude, and a NASA research plane followed the A320 at a safe distance, measuring and analyzing the emissions the A320 left behind.

Recommended Reading:
Does the world need a non-proliferation treaty for fossil fuels?

The tests showed that burning SAF mixes resulted in 50 – 70 percent fewer soot and ice particles. The ice crystals that do form are larger, so they fall quickly and melt in the warmer air below.

Taken as a whole, flying produces less greenhouse gas emissions than electricity production and transport. But the sector is also growing rapidly. Carbon dioxide emissions from aviation have risen rapidly over the past two decades, per the IEA, now accounting for about 2.8 percent of global carbon emissions. Widespread adoption of SAFs could be a meaningful step in reducing aviation’s climate impact, the researchers say.