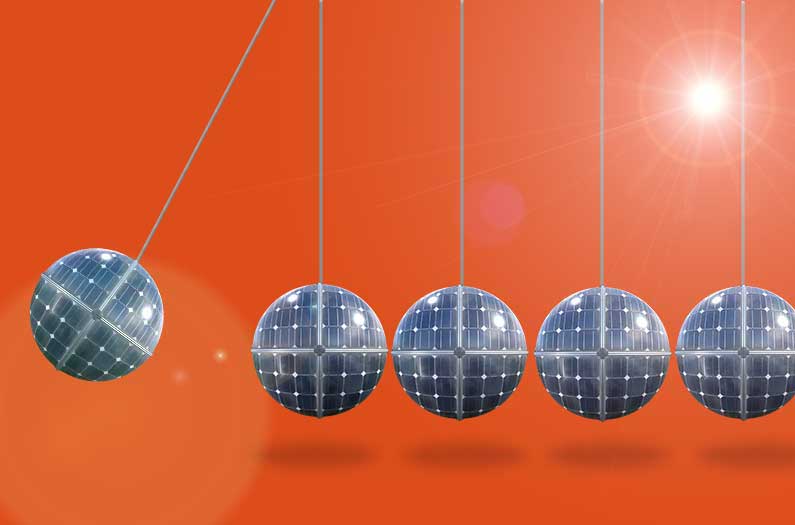 The strongest predictor of whether a house will have solar panels is the density of solar panels on neighboring properties, according to a new study.

The findings suggest that “seeding” solar panels on a few houses in neighborhoods where they are sparse could help residential solar spread faster to more homes.

Researchers want to understand what drives individual climate-related choices, such as the decision to put solar panels on one’s house. This will help design the most efficient programs to promote the spread of climate-friendly behaviors.

Past studies have shown that solar panels tend to be clustered in certain neighborhoods rather than evenly distributed through a city. But are people inspired to install solar panels because they see them on nearby homes, because they hear about them from people in their network, or because they tend to do the same thing as other people with the same demographic or educational background?

Previous studies have been too coarse-grained to fully resolve this question. In the new study, researchers took a closer look using detailed satellite imagery of the city of Fresno, California in the United States. They identified all the solar panels in the city and mapped them to their corresponding addresses—14,803 solar panels at 9,158 properties.

Then they overlaid information about various socioeconomic and community characteristics on the dataset, and used a machine-learning algorithm to calculate which factors best predicted the presence of a solar panel at any given address.

Geography itself is by far the most important predictor, the researchers report in a paper published in Scientific Reports. “We’ve found evidence to support an idea that many find intuitive—when it comes to solar panels, we seem to want what our neighbors have, no matter who those neighbors are,” says study team member Kelsey Barton-Henry, a graduate student at the Potsdam Institute for Climate Impact Research in Germany.

The findings suggest that it’s the nearest neighbors that make the most difference—those within about 200 meters of a property. The effects diminish rapidly at greater distances, and beyond 500 meters the density of nearby panels is no longer a very important predictor.

Some previous studies have suggested that socioeconomic factors are more important than geographic proximity in determining whether people will install solar panels. In the new study, a neighborhood’s median household income and median home value were secondary factors predicting the presence of solar panels on a given home.

What drives the decision to install solar panels may vary from country to country and over time—depending on the price of solar panels, government subsidies available, and so on, Barton-Henry says. But the results may also depend on the study methods. “To truly compare how the drivers of solar panel uptake might differ across countries, we would have to gather the same data for each country over the same time, and employ the same methods,” she adds.

The effect of geographic proximity was strongest in low-income neighborhoods, Barton-Henry and her colleagues found. “Our findings suggest that increasing the number of panels is likely to tip off a ‘virtuous circle,’ or a tipping point, where more panels lead to even more panels,” she says. “This contagion effect is even more pronounced in low-income neighborhoods. Hence, a viable strategy could be to offer subsidies and other economic motivators for solar panel implementation, specifically in areas where (i) panel density is currently low, and (ii) incomes are comparatively low.”