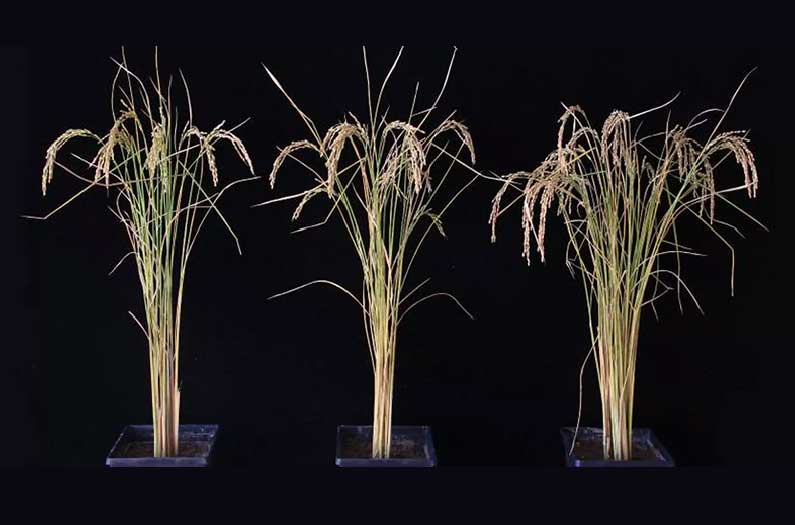 It seems to work for other plants they've have tested as well—even under drought-like conditions
By Emma Bryce
July 30, 2021

Making a relatively simple tweak to plant machinery can kick their productivity into overdrive, enabling rice and potato crops to generate 50% more food, a team of researchers has found.

The tweak—which ramps up the activity of a particular protein in plants—could find a vast array of uses, the researchers believe, most urgently in tackling food insecurity due to the threats posed by climate change.

Their discovery hinges on a protein called FTO that exists in plants and many other organisms, including humans. Previous research has shown that in humans, this particular protein affects growth, seemingly by modulating the behavior of RNA— he molecules that read instructions provided by DNA, and use it to make proteins that underpin multiple functions. FTO exists in plants, but it seems not to have the same effect on growth as it does in humans, almost as if it were silent.

Curious to see if they could launch that protein into action, the researchers experimentally took a gene from humans that’s known to express the FTO protein, and incorporated it into test plants of potato and rice. This yielded a surprisingly dramatic change.

“To me it was just shocking,” says Chuan He, one of the lead authors on the study and professor of chemistry, biochemistry and molecular biology at the University of Chicago: compared to regular plants, the engineered specimens produced triple the amount of yield under laboratory conditions. They were noticeably larger; the rice produced more grains, while the potatoes generated more mass. Even out in real-world field conditions, the plants produced 50% more yield, He says.

The plants also seemed more capable of handling arid conditions, and when tested under drought-like conditions, were able to thrive better with less water than their non-engineered counterparts, the experiments showed.

The researchers think the mechanism behind the FTO proteins responsible for this growth spurt is that when activated, they erase certain chemical markers on RNA, which changes the RNA’s behavior. Specifically, this protein is thought to dampen an RNA process that usually instructs the organism to slow down and thus curtails its growth. But with these chemical markers switched ‘off’ by the protein’s activity, the resulting change in RNA behaviour triggers a downstream cascade of effects that take the cap off growth—and drive a surge in yields.

Closer analysis of the crops showed that they had a much greater proliferation of root cells, which made roots grow longer and deeper—which is also thought to be why they were more resilient to drought stress. And, the plants photosynthesized more, which also fuels greater growth. “Practically, it is such a simple process,” says He. “Although we only it in showed rice and potatoes, it works for other plants we have tested so far.”

Read more:  Egg white protein is ubiquitous in foods and pharmaceuticals. What if we replaced it with fungus?

What He finds interesting is that plants already have the machinery in the form of the existing FTO protein, to release this cap on growth. Inserting the expressing gene was essentially just the switch that turned this protein on. This suggests that the gene could be replaced by a trigger from the plant’s existing genetics to do this job just as effectively—something the research team is working on now. “We have already figured out a way to not use any human protein or other protein inside the plants, and they’ll still keep this phenotype,” Chuan explains. “We think this is the version we’ll use for real world applications.” They plan to report this research update in the future.

There are of course several questions still to be answered, such as how these more robust, productive plants might affect soil quality in the long-run. “There are always uncertainties. Higher biomass plants will fix more CO2 and require more nutrients, we need to keep in mind. On the other side, they are more resistant to drought and other extreme conditions,” Chuan says. “I think we have to test all these factors.”

When could an innovation like this realistically hit the field? He reckons that in about three to five years we’ll see this in the real world. Meanwhile, he’s optimistic about the potential of this discovery not just for crop yields, but also for its possible value in boosting yields of other plant based products like wood—or even for conservation-related uses like reforestation, especially in more arid contexts where desertification has set in.

Food security and biodiversity preservation, though, remain the two highest-priority goals. Boosting yields, especially in drought-stricken habitats, would not only generate more food in places where food insecurity is on the rise, but it could also reduce the pressure on already-strained land resources.

“This is not just about food security, it’s also related to our ecosystems. With higher yields we could save more lands and forests,” says He. “I am excited about all these possibilities.”