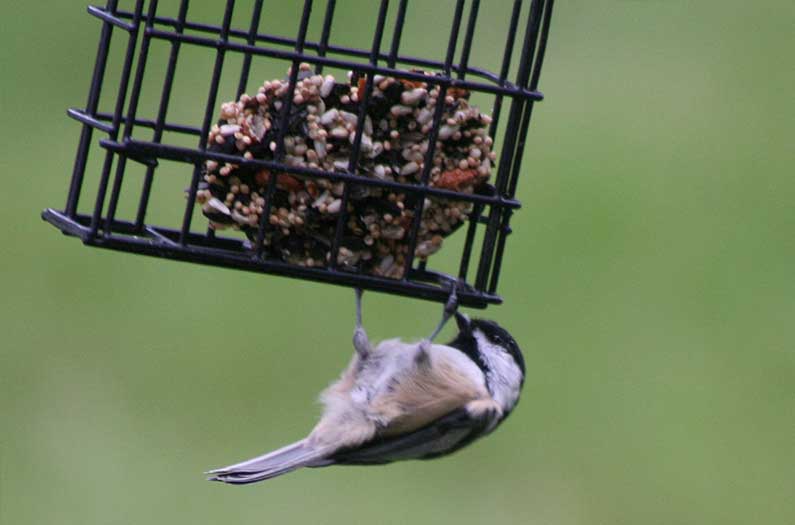 Do feeders get birds hooked on human handouts?

Scientists in Oregon devised an experiment on black-capped chickadees to find out. The negative results surprised them.
By Warren Cornwall
July 7, 2021

Each year, more than 50 million Americans try to lure a bit of feathered wildness into their yards. Bird feeders loaded with everything from seeds to sugar water offer people a way to get up close to colorful wildlife. What’s less clear is whether the easy food harms the birds by getting them accustomed to an easy supply of food.

Now, research by a group of Oregon scientists suggests that bird lovers can set out those sunflower seeds with a little less worry. Contrary to what they expected, the researchers found that black-capped chickadees – common, golf ball-sized songbirds – don’t appear to become dependent on food from bird feeders.

Such feeders can help birds survive winter, as well as increase the survival of newly hatched chicks.  On the down side, however, feeders can spread disease when birds congregate close together, reduce the viability of their eggs, mess with migratory patterns and even cause birds to evolve longer bills.

But there is uncertainty about whether bird feeders make birds learn to rely on people for food, something that could leave them less prepared to survive on their own, particularly in the winter when food is scarcer. A single experiment in 1992 in Wisconsin found that black-capped chickadees in an area populated with bird feeders for 25 years survived a winter just as well as their wild-fed compatriots when the feeders were removed.

So scientists at Oregon State University (OSU) arranged an experiment to test whether black-capped chickadees relied more on a guaranteed food supply in the winter when an injury made it harder for them to flit about in search of sustenance. They set out a string of 21 bird feeders stocked with sunflower seeds along a wooded creek. The feeders were equipped with an electronic counter that marked each time one of 67 chickadees banded with a special tag visited the feeder. Because these birds pick one seed at a time, each visit corresponded to a single seed.

The scientists monitored the birds’ feeding patterns for approximately a month. Then, they clipped off a few of the flight feathers from some of the birds, making it harder for them to fly. The researchers expected the birds that lost the most feathers would start visiting the feeders more often, rather than foraging on their own in the wild. That’s because flying with hobbled wings takes more energy, making it physiologically costly to search for food.

Instead, they saw just the opposite, according to a new paper in the Journal of Avian Biology. For several weeks, the wing-clipped birds visited feeders less often than before. Then their feeding habits returned to match their fully-feathered brethren. The authors surmise the initial drop in flights might have happened because the birds with weakened flying ability were wary of predators near bird feeders as they struggled with their changed wings. Once the birds adjusted to their modified wings, they resumed their old feeding habits.

The results suggest that at least for black capped-chickadees, and potentially for small songbirds more broadly, the introduction of bird feeders doesn’t become a caloric crutch. “There’s still much we don’t know about how intentional feeding might induce changes in wild bird populations,” said Jim Rivers, an OSU wildlife biologist who led the research. “But our study suggests that putting out food for small birds in winter will not lead to an increased dependence on human-provided food.”

That doesn’t mean bird feeders are in the clear. Researchers in South Africa just reported that when feeders stocked with a sugar-sweetened water were hung in yards in the Cape Town suburbs, nectar-sipping birds such as the Cape sugarbird made fewer visits to nearby patches of a native flower that relies on the birds for pollination – an illustration of how even seemingly small disruptions can ripple through an ecosystem.

Lajoie, et. al., “Experimentally induced flight costs do not lead to increased reliance on supplemental food in winter by a small songbird.” Journal of Avian Biology. 2021.