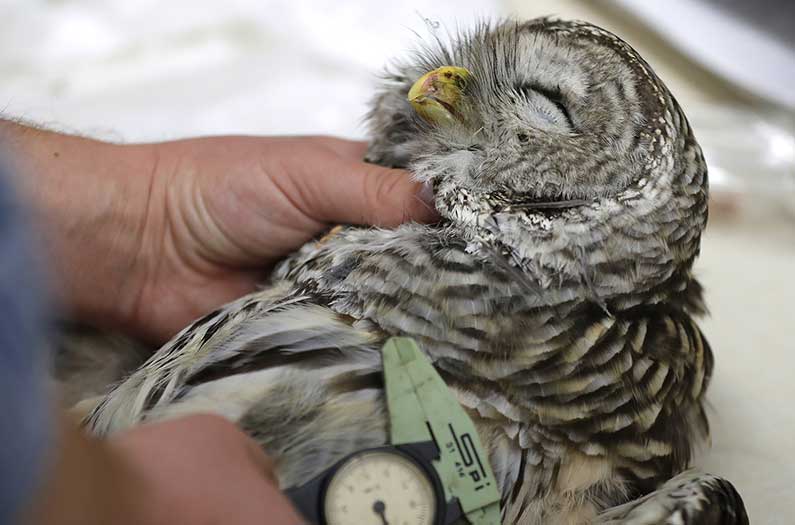 Barred owls are, in a way, the Terminator of owls, built to win out in a human-influenced world. Spotted owls are not.
By Warren Cornwall
July 21, 2021

For years, biologists and federal officials in the Pacific Northwest have wrung their hands about the decline of the endangered northern spotted owl following the arrival of its more aggressive and adaptable cousin, the barred owl. Now, it appears they have a tool that could turn the tables: a shotgun.

While it might sound like a crude way to manage wildlife, new research shows that blasting thousands of barred owls might be a key weapon in halting the seemingly inexorable decline in spotted owl numbers. That is, if wildlife managers and the public have the stomach for it.

“It’s ultimately a tradeoff between doing nothing and basically having this one species (the barred owl) that’s reducing biodiversity overall. Or we take these steps to maintain the biodiversity,” says Dave Wiens, a wildlife biologist at the U.S. Geological Survey who led the research.

Spotted owls were in trouble before barred owls became a major presence. They were listed under the federal Endangered Species Act in 1990, as logging on federal timberlands mowed down the last remnants of Northwest old growth forest where the reclusive owls dwell. The northern spotted owl became an icon for environmentalists, and a legal linchpin for lawsuits that set the stage for the 1994 Northwest Forest Plan, the Clinton-era deal that ended most logging of federal old growth forests there.

Though chainsaws were silenced, spotted owl numbers kept falling. That coincided with the spread of the barred owl, named for the brown vertical bars on its breast. Native to forests of eastern North America, it’s unknown how the birds arrived on the West Coast. They were found in British Columbia as early as 1943. As they migrated south, spotted owls went quiet. By 2017, spotted owl numbers had fallen to less than 35% of 1995 levels in many areas, and less than half in others, according to a new study by federal researchers, including Wiens.

Barred owls are, in a way, the Terminator of owls, built to win out in a human-influenced world. Where spotted owls are picky eaters–dining chiefly on flying squirrels, wood rats and tree voles–barred owls will eat anything from frogs to mice. Spotted owls are wary of people and stick largely to old growth. Barred owls will live in forested suburbs and have been known to dive-bomb unsuspecting joggers. Biologists suspect barred owls outcompete the smaller spotted owls by pushing them out of territory and dominating resources such as food. “They’re an amazing bird,” Wiens says of the barred owls. “But they’re basically vicious predators.”

So Wiens and a team of federal, tribal, university and private industry scientists set out to see if they could help the spotted owl fight back. With backing from federal land management agencies and the U.S. Fish and Wildlife Service (USFWS)–the agency in charge of protecting the spotted owl–the researchers selected five swathes of forest in Washington, Oregon and California that were home to both spotted owls and barred owls. Each of the five areas was divided into sections. In some sections, the owls were left to themselves. But in comparable nearby forest, hired hunters lured barred owls within range and killed them. Between 2009 and 2019, they shot 2,485 barred owls. At the same time, they tracked the fate of nearly 1,500 spotted owls marked with leg bands.

The results, says Wiens, were striking. In places where barred owls were shot, spotted owl numbers held steady, dropping just .2% a year over the ten years. In adjacent land without the hunting, spotted owls numbers fell by 12% each year, according to results published Monday in the Proceedings of the National Academy of Sciences. “The spotted owls that were in those areas where we removed barred owls, were able to retain our territories and remain there,” says Wiens. “In areas where we weren’t doing owl removal, the spotted owls were just disappearing very quickly.”

It’s not all good news for the spotted owls, however. While their numbers stabilized, researchers did not see strong evidence of new owls arriving, either as immigrants or the offspring of resident owls. It’s possible that the study didn’t last long enough for the new birds to appear, says Wiens. Or in some places the spotted owl numbers could be so low they will struggle to bounce back. “It’s an alarming finding,” says Wiens. “Without numbers coming into those populations, those birds eventually get old and die.”

The new research will become a factor in how the U.S. Fish and Wildlife Service decides to try to revive spotted owls. It is a fraught decision. Some have raised ethical concerns about killing thousands of owls to protect other owls. Meanwhile, some environmentalists have objected that while federal officials point the finger at barred owls, they move ahead with plans to allow more logging on Northwest forests (The Biden Administration just moved to withdraw one of the most contentious plans).

The agency “is currently in the early stages of developing a Barred Owl Management Strategy to address the threat to northern and California spotted owls,” agency officials stated in a prepared statement. “This strategy will consider all approaches including lethal removal.”

Meanwhile, further south, guns are starting up over yet another owl conflict. In California’s Sierra Nevada Mountains, biologists are studying whether shooting barred owls will help protect the California spotted owl–a species being considered for federal protection–from suffering a fate similar to its northern neighbor.