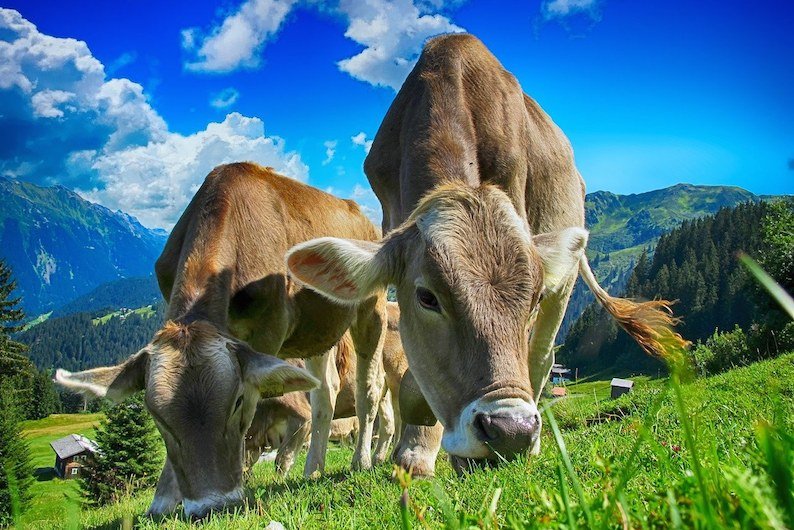 Cattle may not be the best thing for the climate, but new study shows they could play a role in tackling plastic pollution
By Prachi Patel
July 22, 2021

Livestock farming produces a large share of the world’s greenhouse gas emissions, what with cows belching and farting tons of methane. But the ruminants might be unlikely allies in the world’s fight against plastic pollution. New research by scientists in Austria shows that the microbes found in cattle stomachs can break down certain kinds of plastic.

The small building block molecules that are left behind can be reused to make recycled plastics, says Doris Ribitsch of the University of Natural Resources and Life Sciences, Vienna. “We fully believe that microorganisms represent a huge and not fully exploited resource of information that can help us towards a green recycling of synthetic polymers.”

The amount of plastic humans use and discard is growing at an alarming rate. Almost 26 million tons of plastic waste has accumulated in land and marine environments in Europe alone as of 2019, the researchers write in the journal Frontiers in Bioengineering and Biotechnology.

Plastics are polymers: long chains of smaller molecules strung together like beads. While synthetic plastics can last for centuries and harm the environment, natural polymers like cellulose, proteins and silk can degrade. Microbes secrete enzymes that can break down these natural polymers.

And some microbes, it turns out, can also break down synthetic plastics. Researchers have in recent years been on a quest to rein the ability of microbes such as bacteria and fungi to munch and degrade plastics. In 2016, a team found a plastic-devouring bacterium in the mud near a Japanese plastic recycling factory. Others have found plastic-eating microbes at waste disposal sites and oil sites. A French company called Carbios has engineered a bacterial enzyme, originally discovered in a compost heap of leaves, which can break down plastic bottles in hours.

Ribitsch and her colleagues decided to investigate the content of the rumen, a compartment of the cow’s stomach. That’s because microbes in the rumen break down plant matter that cows eat before it goes on to other parts for digestion. Yet not much research has focused on analyzing these organisms and their polymer-degrading enzymes.

The team obtained fresh rumen liquid from a local slaughterhouse that would otherwise go to waste. They incubated this with three types of plastics: PET, used commonly in textiles and packaging); PBAT, a biodegradable plastic used to make compostable plastic bags; and PEF, another biobased polymer. They tested both film and powder forms of each plastic. The fluid broke down all three types of plastics, and the powders degraded faster than the films.

Thousands of microbes—bacteria, fungi and archaea—are found in the rumen. The researchers next plan to conduct further tests to pinpoint which of these bugs are key to the plastic degradation. Then they could identify the enzymes so that they can be made on a larger commercial scale for plastic recycling.

Image by Pete Linforth from Pixabay