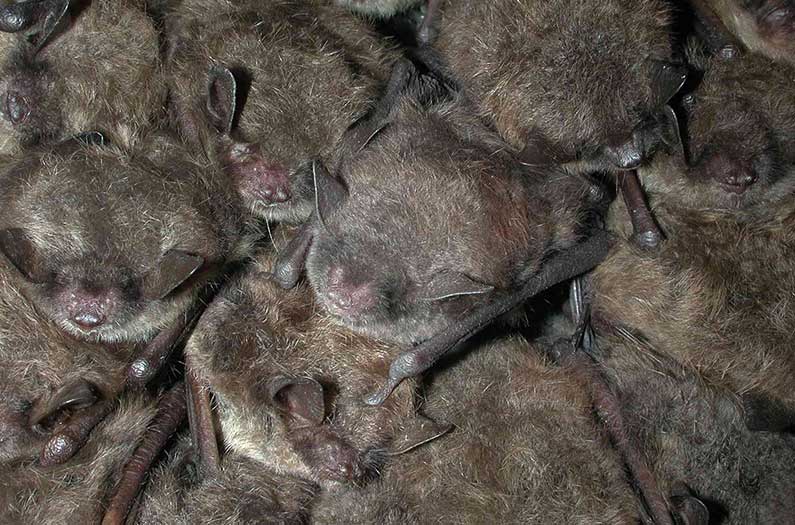 Batman has his Batcave, a high-tech underground headquarters where the fictional superhero can hide from his countless enemies. Now, scientists think they have found a way to create the equivalent for real bats seeking to escape a deadly nemesis: white-nose syndrome.

In Pennsylvania, state wildlife officials have re-engineered little-used caverns in a bid to lower cave temperatures and create new, human-made habitat for bats that are showing a preference for colder caves.

At a time when efforts to produce vaccines or anti-fungal sprays have yet to bear fruit, artificially cooled caves could offer a lifeline to some bats, said Joe Johnson, an Ohio University wildlife biologist studying the Pennsylvania bats. “It’s a Band-Aid,” said Johnson. “But it’s a much-needed Band-Aid.”

Since the fungus Pseudogymnoascus destructans first appeared in caves in upstate New York in 2006, it has swept across much of the country, leaving millions of dead bats in its wake and pushing some species to the brink of extinction. The fungus grows on the skin of hibernating bats, spreading in crowded caves and leaving the animals with a powdery white fringe on their snouts. It is thought to kill bats by wreacking metabolic mayhem—causing dehydration and frequent wakening from hibernation, which forces the tiny mammals to burn crucial fat reserves. Populations of once-common bats such as the little brown bat, the northern long-eared bat and the tricolored bat have collapsed by more than 90% in the central and eastern U.S. and eastern Canada. Just this year, the first cases were found in Wyoming at Devils Tower and in New Mexico near Carlsbad Caverns. The disease turned up in Texas in 2020, raising fears that it could sweep into Central and South America.

This grim scenario prompted researchers and wildlife officials in Pennsylvania to see if bats might be adapting by changing their behavior, and if humans could lend a hand. Earlier research had showed that the deadly fungus grows best between 12C and 16C, while the metabolism of many bats will slow during hibernation at temperatures a bit above freezing.

Greg Turner, a wildlife biologist with the Pennsylvania Game Commission, wondered if colder caves offered a safe harbor. He noticed that bats were turning up in caves they had previously shunned. Digging through data from annual surveys of hibernating bats in the state, he found that hibernating bats such as the little and big brown bats were concentrated in caves with mid-winter temperatures ranging from 6C to 9C before white nose syndrome. More recently, the preference has shifted to 3C to 5C.

The problem was, Turner knew of only around a half dozen caves in Pennsylvania that fit this temperature profile. So he set out to create more. Targeting abandoned mines and warm caves with few hibernating bats, Turner led a campaign to alter 6 cave entrances to bring in more cold air. Between 2015 and 2018 they lowered the cave temperatures an average of 2.1C.

In some cases, it was a matter of simply digging a new ventilation shaft to alter air currents. In other cases, Turner has gone a little more, well, Batman. At a former sandstone mine he’s now in his fourth year of a remodeling that involves a 10-meter-high, steel-reinforced concrete wall laced with spray-foam insulation. But there are limits. “We’re trying to make these passive a much as possible. I don’t want to bring in solar panels and big mine fans and start blowing cold air in,” he says.

Turner and Johnson – who teamed up with the state biologist – are already seeing results. In the first cave Turner tweaked, bat numbers went from 11 bats of one species before the alterations to 82 bats from four species last winter. Overall, at the manipulated caves, little brown bats started to turn up in large numbers and the counts of big brown bats increased most in the coldest caves, according to results of their research just published July 5 in the journal Conservation Biology.

The results, though promising, don’t mean the end of the threat. Some bats, such as the tricolored bat, showed a preference for warmer caves. And the disease is still present in the colder caves. It’s a question of whether the conditions there help bats endure it. While they haven’t published a paper yet, Turner has presented results at scientific conferences suggesting the infections are less severe in bats in colder caves.

The work has caught people’s attention elsewhere. Michigan officials are working to create a colder cave now, and people from Wisconsin have called to learn more, Turner said. If these early findings hold up, Pennsylvania, with its long history of coal mining,  has plenty of other opportunities for air-conditioned Batcaves. “In Pennsylvania,” says Johnson, “Warm holes in the ground are a dime a dozen.”