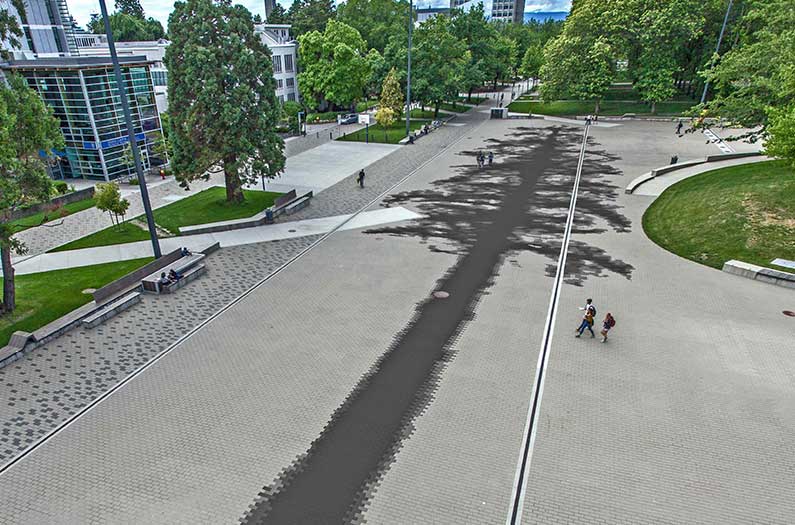 The presence of 20 additional mature trees in one neighborhood could lower the temperature by 1.39 degrees
By Sarah DeWeerdt
July 6, 2021

The research suggests that shade from trees and carefully sited buildings could go a long way to mitigate the urban heat island effect, the tendency for cities to be several degrees hotter than surrounding areas due to the heat-absorbing effects of pavement and building materials.

“While we of course intuitively know that shades make the thermal environment more comfortable, this research provides a means to measure this effect,” says study team member Jean-Michel Guldmann, professor emeritus of city and regional planning at the Ohio State University in Columbus.

Guldmann and his collaborators, Yujin Park of Chung-Ang University in South Korea and Desheng Liu of Ohio State, created a 3D computer model of a 36-square-kilometer area of Columbus, Ohio. They combined this with information on land cover – grass, pavement, water, and so on – across the city. Then they calculated the shadows cast by the buildings and trees from 11 am to noon on Sept 14, 2015, and integrated this with 39,715 temperature data points gathered by a NASA satellite that passed over Columbus on exactly that date and time.

“The statistical analysis demonstrates and measures the differential effects of shadows over different structures and land covers,” Guldmann explains. “For instance, a sun-exposed road will increase the local temperature, but any part that is shaded will help attenuate this effect.  This also applies to grass and to the sun-exposed facades of buildings.”

The researchers report their results in the journal Computers, Environment & Urban Systems.

Trees cool the city environment in two ways, they found: by casting shade, and by transpiration, or the evaporation of water from their canopies.

The researchers’ model could help planners figure out the best places to add green spaces and plant trees in cities, and even how to design and situate buildings to maximize the shade they provide to other buildings and roads. “A general design principle is to maximize the extent of shadows at ground level and on building walls by properly siting new buildings and new trees,” Guldmann says.

A previous study of 60 US cities found that summer temperatures are 2.4 °F higher in the urban areas than in rural areas nearby – so planting trees in the right spots can at least cancel out the average urban heat island effect.

“I believe that the Columbus-estimated models could be used for other cities, but some more research should probably be done to guarantee this transferability,” Guldmann says. And, he argues, it should be feasible for many cities to undertake their own work along similar lines: “Most metropolitan areas and even mid-size cities are now well equipped in terms of geospatial tools and data, and therefore should be able to apply the procedures used in this research to create a 3D digital environment, generate shadows, and conduct statistical analyses.”