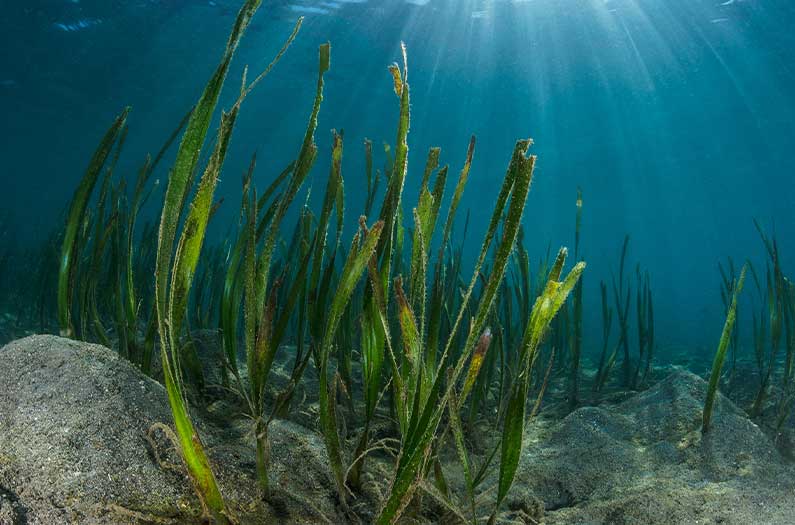 Researchers calculated that mangroves, salt marshes and seagrass meadows store roughly the equivalent of the annual carbon emissions of France—with an estimated value of $190 billion per year.
By Warren Cornwall
July 28, 2021

When Liza Minnelli sang that “money makes the world go round” in the 1972 film of the musical “Cabaret,” she didn’t mention mangrove swamps or sea grass. But now, a team of German researchers have applied this thinking to cast a spotlight on the value countries reap from saltwater ecosystems that suck carbon dioxide from the atmosphere.

The results of trying to put a dollar value on this so-called “blue carbon” underscores its importance to confronting climate change, as well as the notable and sometimes surprising imbalances between countries that store the most carbon near their shores, and the ones who benefit most from it. Tiny Cuba? It turns out to be very generous to the rest of the world.

As the world struggles to tackle climate change, scientists and policymakers often use money to quantify the costs and benefits of climate change and potential solutions. While it’s one thing to tally up the value of homes lost to rising seas, putting a price on a tidal marsh is a bit trickier. Do you use the price of the real estate? Or the money you could earn selling credits in one of the fledgling carbon markets, in which polluters pay to preserve or improve carbon sequestration in ecosystems, such as forests?

Such yardsticks can overlook costs and benefits, or be subject to outside influences, such as regulations that drive carbon credit prices up or down, says Wilfried Rickels, an environmental economist who helped lead the research through the Kiel Institute for the World Economy, an independent, government-funded research organization. Instead, he and his fellow scientists turned to a statistic called the social cost of carbon – a sum of all the costs and benefits that come from puffing more carbon dioxide into the sky.

Calculations of things like the total value of blue carbon are useful because they help incorporate the full economic impacts of things that are often overlooked when measuring economic activity, says Rickels. “It allows you to compare a potential wealth loss or gain outside the economy to see if you really develop sustainably.”

While accounting for the social cost of carbon is fraught with uncertainty and fights over methodologies that give wildly different costs, Rickels’ team relied on 2018 estimates of a global social cost of carbon and similar cost for each country, calculated by a group of U.S. and European researchers. The German researchers combined this with data mapping the global distribution of three key near-shore ecosystems – mangroves, salt marshes and seagrass meadows – as well as estimates of how much carbon each type sequesters.

The blue carbon stored by these ecosystems totaled around 81 million metric tons of carbon per year – roughly the greenhouse gas emissions of France – with an estimated value of $190 billion per year, according to the research, which appeared mid-July in the journal Nature Climate Change.

But this blue carbon “wealth” isn’t spread equally. Nations with extensive coastlines and fertile tidal zones have the greatest stashes of such carbon. Australia ranks at the top with an eighth of the world’s total blue carbon capacity, followed by the United States and Indonesia.

Likewise, the benefits aren’t equal. A poor country with less economic infrastructure might suffer fewer climate-related damages from an additional ton of carbon in the atmosphere – meaning their social cost of carbon might be lower than a wealthy country with a lot more to lose. Some countries such as Russia are even projected to have an overall benefit from climate change, for example as growing seasons expand in the far north.

The scientists sought to account for these differences by showing which countries were the biggest exporters of blue carbon wealth – that is, those who stored the most blue carbon relative to the cost of carbon in their country. The most generous was Australia, followed by Indonesia and Cuba. Rickels said Cuba probably ranked so high thanks to the island country’s coastline and relative lack of economic wealth. “Countries which are poor have not as high social cost of carbon,” says Rickels. “That could be a bit the driving factor behind Cuba.”

Meanwhile, the five biggest beneficiaries – those with the highest social cost of carbon relative to their blue carbon capacity – were India, China, the U.S., Pakistan and Japan. While it’s beyond his expertise as an economist, said Rickels, with results showing the biggest benefits go to some of the world’s biggest carbon polluters, “people might perceive this as unfair.”

The carbon stored in these saltwater ecosystems is just a fraction of all the carbon suck up by natural systems, such as forests. The new study, says Rickels, is just the first step in a more ambitious effort to crunch similar economic numbers for all the world’s ecosystems. Now, is there a show tune that could be written about the results?