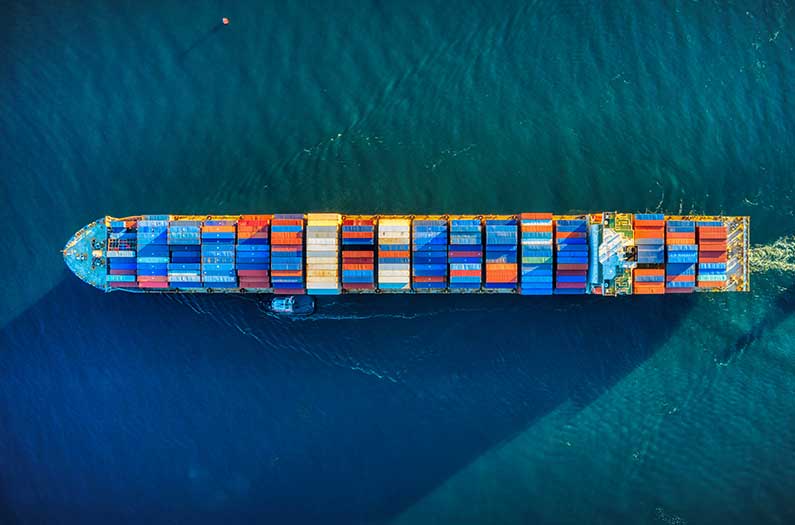 The stored carbon dioxide can be buried or reused as renewable fuel.
By Prachi Patel
August 26, 2021

In one year, large cargo ships emit as much pollution as 50 million cars. The shipping industry will have to make a large dent in those emissions if the world is to achieve its net-zero emissions goals.

Researchers at Northwestern University propose a somewhat controversial solution: fuel cells that burn traditional fossil fuels, but then capture and store the carbon dioxide. The compressed gas could then be sequestered permanently or converted into liquid fuel for reuse, potentially making shipping carbon-neutral, they say.

The shipping industry produces about 3 percent of global greenhouse gas emissions, which is fairly small, but some experts project that share could go up to 17 percent by 2050. And the shipping sector isn’t addressed in the Paris climate agreement.

The industry is, nonetheless, exploring various technologies to cut its emissions. These include batteries and the use of sustainable hydrogen or ammonia fuels. But these options are still expensive and will take years to deploy at the vast scales needed to push heavy-duty energy-intensive ships around the world’s oceans.

Plus, while the assumption is that batteries and hydrogen might be better for the climate, the electricity to charge batteries typically comes from burning coal, while hydrogen is often produced from natural gas, said Northwestern materials science and engineering professor Scott A. Barnett in a press release.

A better alternative for long-range freight vessels might be fuel cells, which are battery-like devices that can generate electricity from carbon fuels, producing water and carbon dioxide. This would take advantage of energy-dense liquid fuels, which would produce enough power for large vessels. “It might be harder for people to see onboard CO2 capture as climate friendly because it uses conventional, carbon-based fuels,” he said.

In their study published in ACS Energy Letters, Barnett and Travis Schmauss analyzed the amount of fuel and energy needed to navigate around the globe. They found that the batteries needed for a long-range cargo or tanker ship would occupy all the vessel’s storage capacity, and hydrogen fuel tanks needed would also be immense. 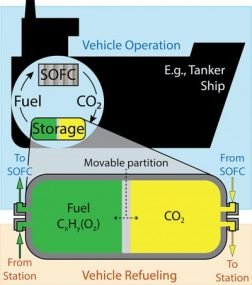 Instead, they suggest, a more practical approach might to be use a fossil fuel-burning fuel cell combined with a new design for the ship’s fuel tank. The two-chamber tank would help to efficiently store both fuel and carbon dioxide for reuse.

The tank has a movable partition so that as the liquid fuel is consumed during a voyage, the fuel side of the tank would shrink. Captured and compressed carbon dioxide would be pumped into the other side. When the ship is at port, the carbon dioxide could be pumped out for processing into fuel or to be pumped underground for sequestration, while the other side of the tank is filled with fuel.

This technology is flexible, and could be implemented in stages, they say. For instance, fuel cells could be incorporated first, followed by carbon dioxide capture. “Of course, numerous technical, financial, and policy challenges must be surmounted to realize this technology,” they write in the paper. But, compared to the several technologies available to reach net-zero emissions, this might be the most reasonable option at least for long-range sea transport.

Photo by Cameron Venti on Unsplash