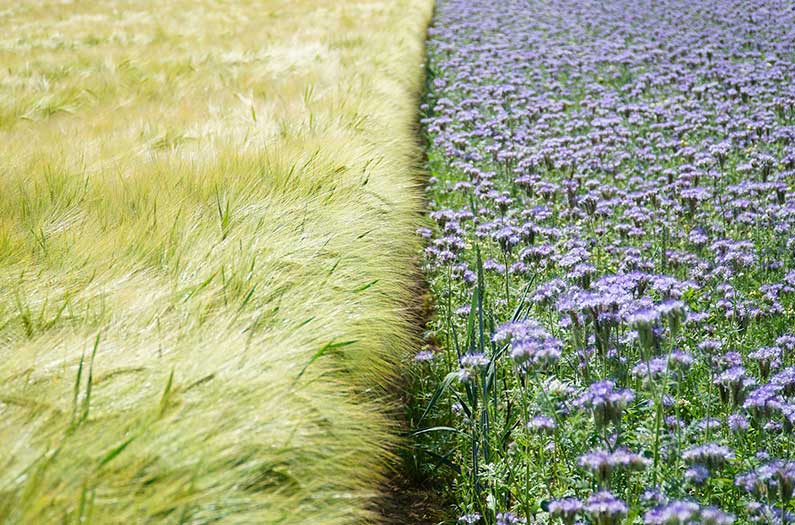 The team found that landscapes with increased diversity produced ~17 to 18 bushels more per acre, of corn and wheat
By Emma Bryce
August 27, 2021

Increasing land cover diversity in agricultural landscapes is about more than protecting nature: it could also increase crop yields across large areas of the United States by up to 20%, according to a recent Nature Food study.

Studies at the farm-level have previously shown that incorporating diverse land cover—features like hedgerows and flower borders—onto the land can help to boost agricultural productivity. That’s because more diverse landscapes improve ecosystem health by, for instance, harboring insect life that boosts pollination, and increasing the density of organic matter that improves soil richness—which have benefits for agriculture too.

But most studies on landscape diversification have been relatively confined to these single on-farm studies: this time, the researchers on the new paper wanted to measure the benefits at national scales.

To do that, they looked at the United States context and focused on three crops: wheat, soybeans, and corn. Looking at these staples, they built a model that combined datasets on crop yields, weather data, soil, and landscape features. The data covered the period between 2008 and 2018, and incorporated 3,100 counties, which covered the entirety of the contiguous United States.

In this mix, the researchers were seeking clues about the relationship between two key features and crop yields: they wanted to understand whether there was a link between increasing land cover diversity and increased yields, and how the configuration of land—the way it is arranged—influenced productivity, too.

Landscape configuration—i.e. which types of land occurred where—had comparatively weaker association with crop yields, the researchers found. That said, the structure of the landscape did seem to mediate the success of land cover diversity in improving yields. In fact, high landscape diversity, combined with diverse configuration of the land, were together associated with the highest yield gains—more than 20% for national yields of corn and wheat, the study concluded. (Throughout the modeling, soybean yields were minimally-affected by changes in landscape diversity.)

To put these benefits into context, these yield increases were equivalent to the gains that crops would experience from receiving the appropriate amount of rainfall, or being in suitable soil, the researchers calculated.

This suggests that for a nation’s ability to produce more food, there may be tangible advantages to increasing landscape diversity. That goes against the grain of monoculture, which for a long time has been treated as the default solution for generating higher yields, a concern that’s only growing as the impacts of climate change on our food supply become clearer. But the new study joins a growing body of research showing that agricultural expansion isn’t the only way to protect our food systems (considering also, all the ecological damage it does.)

Diversifying landscapes, on the other hand, could conserve nature and help to boost food production, the new study suggests. And the fact that the research shows these associations are maintained at national scales indicates it could be one realistic tool for safeguarding agriculture in a changing world.

Applying this to the US farming context, the researchers suggested diversification would work best in places where there are currently moderate levels of diversity that can be enhanced. Meanwhile, in regions where monoculture has drastically simplified the terrain, larger-scale transformations will be necessary to insert diversity back into the landscape, they explain. That will be harder—though not impossible—to accomplish.

Figuring out the practicalities of how to diversify across these contexts will be the new focus of the research. Next, the authors plan to carry out surveys across parts of the US “to understand the barriers and bridges to diversification,” says Emily Burchfield, and assistant professor in environmental sciences department at Emory University, and co-author on the study.

“How do farmers actually make decisions about diversification, what makes diversification easier, what are the major challenges or barrier that keep them from developing more diverse cropping regimes?” Burchfield says. Answering those questions may bring us a step closer to ecologically-healthier, more resilient food systems.