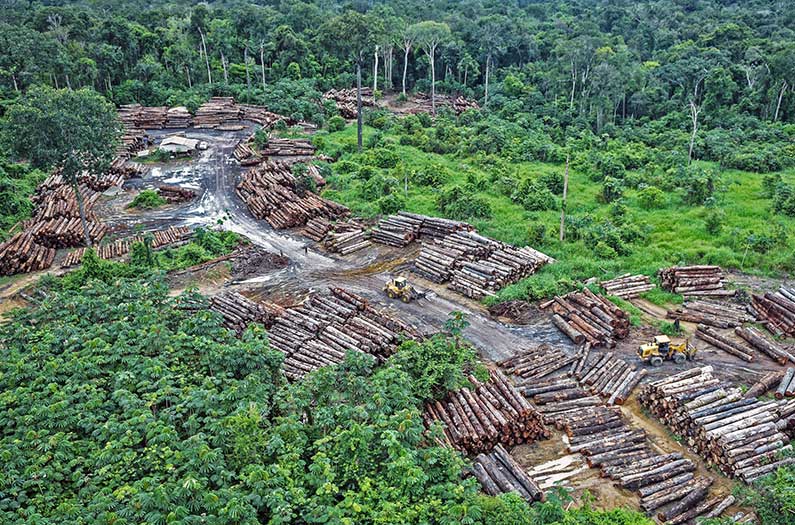 Scientists use satellites to track deforestation in forest reserves around the world, and to learn what factors make for stronger protections.
By Warren Cornwall
August 11, 2021

As conservationists lobby governments to protect 30% of the planet’s land, it’s becoming clear there’s no guarantee that “protected” land is safe from chainsaws.

The proliferation of high-quality satellite imagery has enabled scientists and activists to act as watchdogs, checking for evidence of logging, farming, and mining in places where such activities are banned. What they are seeing isn’t always pretty.

Around the world, between 2000 and 2012, forests equal to the size of the Netherlands were cut down inside newly set aside conservation areas, according to new research by scientists in Japan and the U.S. The good news: Without the protections the damage would likely have been nearly four times greater, totaling 120,000 square kilometers – roughly the same size as Nicaragua.

The new work sheds light on the scale of the problem, as well as factors that make some places more vulnerable to deforestation, holding out the possibility that such protections could be improved. “Protected areas on the whole reduced deforestation,” said Payal Shah, an economist at the Okinawa Institute of Science and Technology who led the research. “But when you start breaking down the data by country, the results are more mixed.”

The findings come as 100,000 square kilometers of forest disappear each year, according to the United Nations’ Food and Agriculture Organization.

To help stem the loss, environmental groups and scientists have pushed what is known as “30 by 30” – an initiative to protect nearly a third of the world’s habitat both on land and in the oceans by 2030. The effort recently got a boost from the administration of President Joe Biden, who issued an executive order in January calling for the federal government to meet those targets in the U.S.

Shah and her colleagues set out to see how well such efforts have fared in recent times when it comes to halting deforestation, and what influenced their success.

To do that, the researchers used satellite images to track changes in forest cover between 2000 and 2012 in 81 countries. They compared what happened to 3.2 million square kilometers of forest placed inside new protected areas with similar unprotected areas during those years.

They found that such protections make a major difference, reducing forest loss by 72% compared with the fate of comparable forest outside forest reserves, according to a study in the journal Environmental Research Letters. But it wasn’t foolproof. The protected areas still lost approximately 34,000 square kilometers of forest.

The fate of these protected forests wasn’t the same in each country. In fact, if all countries performed as well as the best in their part of the world, nearly all of the deforestation in protected areas would likely have been prevented, according to the analysis. The top performing countries in each region were South Africa, Cambodia, Latvia, Guatemala, Uruguay, Brazil and New Zealand.

“The countries in each region are battling against similar key drivers of deforestation, such as timber logging or wildfires, so theoretically, every country has the potential to do equally well,” said Shah. “But we are seeing these huge disparities in the effectiveness of their protected areas.”

To understand what might be driving these differences, Shah used computer algorithms to tease out which of a myriad of factors emerged as common themes among different pieces of forest. The emerging picture was that forest reserves fared worse in countries dependent on agriculture, with large rural populations, lower economic growth, and more dysfunctional governments. Protections were stronger in places with higher economic growth and a track record of setting aside land in the 20th century.

The analysis was too broad to zero in on why any single country performed well or poorly, according to Shah. But it does serve as a guide for identifying countries in need of improvement, she said.  “We can then carry out more targeted research in these countries to help support more effective conservation strategies.”

Image: illegal logging on Pirititi indigenous amazon lands with a repository of round logs on May 8, 2018 (Felipe Werneck/Ibama via flickr)